Aid Castor in his plan to take over the Grid (failed)

Gem is a program known as a Siren who appears in TRON: Legacy. She works in the armory underneath the Game Arena along with three other Sirens, outfitting programs and digitized users with armor for the games.

She was portrayed by Beau Garrett.

Gem first encountered Sam Flynn when he was captured and sentenced to fight in the Arena. She and the other Sirens equipped him with his attire and Identity Disc, disregarding his discomfort at their attentions. Unlike the other Sirens, Gem lingered outside her pod at the side of the armory room as Sam asked her what he was to do now. With an enigmatic smile, she responded, "Survive."

She encountered Sam again in Zuse's sector, ostensibly by coincidence, and conducted him to the End of Line Club to meet the program he was looking for, telling him that she wished she could have met him under different circumstances. In the club, she sought out Zuse, murmuring to him that she had brought "your boy Flynn," and accompanied them up to Zuse's private lounge. When Black Guards invaded the club looking for the user, Gem was revealed to be in league with Zuse, who had summoned them as part of his bid for power over the Grid.

Gem remained at the club after Sam escaped, standing with Zuse when he attempted to trade Kevin Flynn's identity disc to CLU 2 in exchange for control of Tron City. CLU accepted the disc, but his guards mined the club with light grenades as he left, leaving Gem and a stunned Zuse behind him.

Moments later, explosions demolished the top floor of the club, presumably derezzing Gem and Zuse along with it.

Gem possessed a straight-to-the-point, stoical temperament. She usually had a pleasant but calm and focused look on her face; her smile occasionally had a sardonic tilt. She faced Sam's scrutiny, a chaotic battle at the End of Line, and her own imminent destruction with the same stoic demeanor.

When Jarvis attempted to flirt with her while Zuse was negotiating with Clu, she responded with an eyeroll and an expression of faint revulsion.

She also displayed interest in Sam outside her roles as Arena outfitter and femme fatale, watching his reactions to the club and appearing to give him a genuine smile when telling him her name. 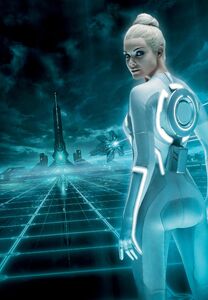 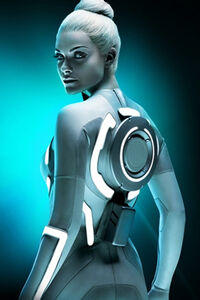 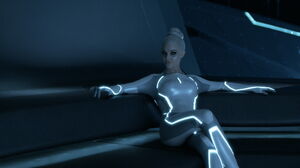 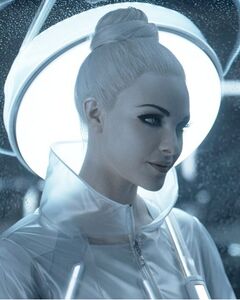 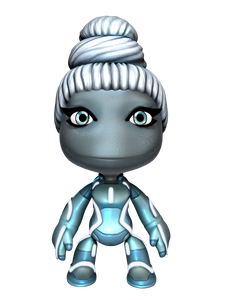 Retrieved from "https://villains.fandom.com/wiki/Gem_(Tron_Legacy)?oldid=4053259"
Community content is available under CC-BY-SA unless otherwise noted.