Blue Chalcedony, also known as the "Gem Cave Creature", is a Gem Monster and a minor antagonist in Steven Universe, appearing as the main antagonidt of the episode "Arcade Mania".

It appears as a gigantic brittle star, with a massive disk and short arms. The upper portion of its disk appears as a giant mound of turquoise colored crystals with multiple geometric facets. The lower-half of the disk is colored dark turquoise. The arms are joined near the middle of the disk and taper to a point outwards, they are of a darker shade of turquoise. The ventral side of the disk contains a drill-like apparatus that can unfurl to reveal five turquoise colored arm, and appears to have fingers, that surround a mouth. The dorsal side of the disk houses multiple Drill Parasites that furl themselves to form spike-like protuberance that the Gem Cave Creature can launch.

The Crystal Gems were attacked by it, which Garnet successfully managed to defeat, and proceeded to bubble its gemstone.

The Gem Cave Creature's gemstone is light blue, and possesses multiple facets on all sides with spikes potruding out of each vertice. It is located somewhere within its head. 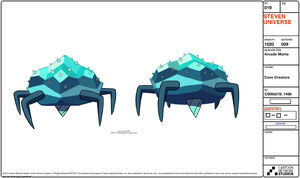 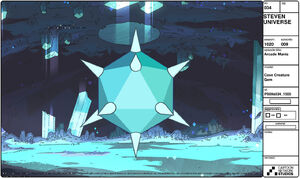