Villains Wiki
Register
Don't have an account?
Sign In
Advertisement
in: Minion, Star vs. the Forces of Evil Villains, Science Fantasy Villains,
and 23 more

Gemini (Star vs. the Forces of Evil)

To help Miss Heinous in any way possible.

Gemini is a minor antagonist in the Disney XD animated series Star vs. the Forces of Evil. He is the personal assistant of Miss Heinous working in St. Olga's School for Wayward Princesses.

He first appeared in "St. Olga's Reform School for Wayward Princesses" introducing the newest arrivals to the school of the same name. He then introduces the students to the school's headmistress Miss Heinous. He helps keep the security of the school in check along with the guards and makes sure no one escapes. However despite his best efforts to maintain the school with Heinous, he was unable to stop the princess rebellion cause by Star and Marco who infiltrated the school to rescue Star's friend Pony Head.

He makes another appearance in "Gift of the Card" where he is living in a rundown hotel with Miss Heinous due to both of them losing their jobs because of the events of the princess rebellion. He is present with Miss Heinous when she hires Rasticore. The she orders him to take the last of their money and buy some hairspray. In the end Gemini gives Miss Heinous a package which contains Rasticore's dismembered hand and tracker.

In "Heinous" both Gemini and Miss Heinous live in a car and use Rasticore's dimensional chainsaw to transport them and the car to Earth right at the Diaz household. He lets Heinous out of the car while Heinous brings Rasticore's regenerating arm, showing more affection much to his jealousy. Then they wait in the Diaz household with her for Marco. When Star and Marco come home they immediately start attacking the two, with Marco hold Heinous down and Star shooting a narwhal at Gemini. After being called of by Marco's parents, Gemini and Heinous explain their troubles and demand justice.

In the end Gemini films an apology from "Princess Marco" then they leave. Gemini puts Miss Heinous to bed in the car while he sleeps in the trunk. He secretly has a princess Marco doll, showing him being moved by her rebel nature.

Gemini appears in "Princess Turdina" along with Miss Heinous and Rasticore. When Heinous exposses Marco as a boy in front of his princess followers they revolt against her. Geminis tries to fight them off with rasticore tied to his back, but soon retreats. In the end Gemini uses a machine to help Heinous drain the youth out of Princess Smooshy.

Gemini appears in "Monster Bash" Gemini and Rasticore capture Marco and try to drain his youth for miss heinous. When Heinous discovers the Hidden chamber in the monster temple she begins to recognize it. Mina Loveberry then comes in and calls Heinous Meteora. Gemini then corrects saying that her name is Miss Heinous. Heinous then remembers that Meteora is her real name and that she is the daughter of Eclipsa Butterfly. In the end Gemini and and Rasticore look at Heinous with fear as she transforms and renaming herself Meteora.

In "Skooled" Gemini is revealed to be a robot. Meteora eventually kills him by ripping off his heart in fit of rage when Rasticore leaves her and refuse to join her cause. 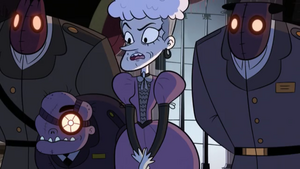 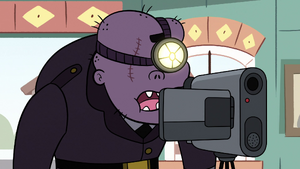 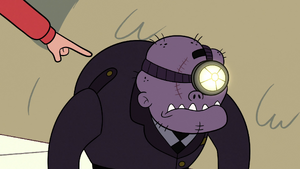 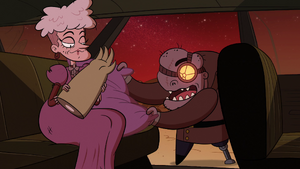 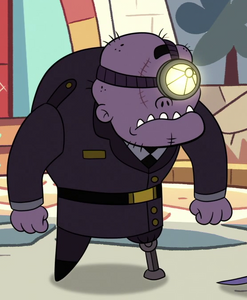