Killing people in both life and death.

To possess Father Karras and make him kill others to shame his father.

He was portrayed by Brad Dourif, who played Gríma Wormtongue in the Lord of the Rings trilogy, Mathias in Fading of the Cries, and Chucky in the Child's Play film franchise.

The story is almost identical to the film, just with some minor changes, such as the addition of an alternative nickname to Patient X, Tommy Sunlight. Another difference is that the killer had a brother whom he loved who isn't mentioned in the film. It is also stated in the book that he and his brother were abused by his alcoholic father who was also a preacher-thus resulting in his blasphemous nature.

When Father Damien Karras killed himself during the first novel/movie, serial killer James Venamun was executed at the same time, realizing his defeat, Pazuzu transfered Venamun's soul to Karras' dead body. However, Karras' brain and bone tissues were already destroyed, making his body unable to be fully controlled. Karras was eventually found by the locals and sent to a mental hospital, where he stayed locked inside Cell 11 for 15 years under the name of Patient X, until Venamun emerged.

One day, Patient X suddenly became hostile and violent towards other individuals, claiming to be The Gemini Killer. After a number of strange occurrences in the hospital, such as patients murdering people (one of them being a young black boy whose head was decapitated and was replaced by the head from a Christ statue and crucified on a pair of roaring oars), a detective arrived to investigate the case. Upon meeting Patient X, detective Kinderman notices that Patient X has a similar appearance to Damien Karras, who was his close friend. Later, Venamun tries to kill Kinderman's daughter using one of the patients as a vessel, failing, he attacks Kinderman but was interrupted by Father Paul Morning when he tries to exorcise the patient but the demon Pazuzu intervenes, knocking Morning unconsciousness. After slowly remaining his consciouness, Paul motivates Karras to fight Venamun, which actually works. Karras asks Kinderman to shot him in order to destroy Venamun and Pazuzu's influence, Karras is then shot several times by Kinderman, fatally wounding him and expelling Venamuns' soul in the process. With Karras' soul still inside the body, Kinderman gives him a mercy shot to end his pain and finally sending his soul to the afterlife. 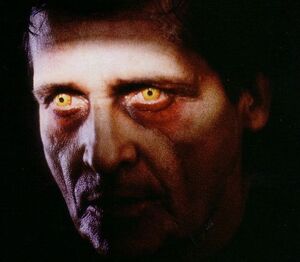 Retrieved from "https://villains.fandom.com/wiki/Gemini_Killer?oldid=3795538"
Community content is available under CC-BY-SA unless otherwise noted.