Viewing himself in the mirror.

Gemini Man (in Japanese: ジェミニマン), is one of the Robot Masters in Mega Man 3. He excels in duplication.

Gemini Man is an elegant fighter. He is confident in his abilities. He is also a narcissist since he likes to admire himself in front a mirror. Gemini Man hates and fears snakes.

Gemini Man is the third Robot Master created by the combined efforts of Dr. Light and Dr. Wily. His supposed purpose was to help the forces of good to maintain peace. However, this was merely a façade. Dr. Wily intended for Gemini Man to be another one of his robotic servants. Dr. Wily reprogrammed Gemini Man who then became evil.

During his first phase, Gemini Man will create an exact copy of himself. Both of them will constantly run around the room in a circle. If Mega Man tries to attack them, they will return fire with their Gemini Laser. The solution is to keep attacking until the copy is destroyed. Afterward, the original Gemini Man will attack on his own at any time. He fires the Gemini Laser which bounces around the area. The Search Snake is his biggest weakness.

Gemini Man makes a cameo as data in the weapons archive.

Gemini Man is one of the first 4 bosses. He acts the same as in Mega Man 3.

Gemini Man appears in world 3-6. His first phase is the same as in Mega Man 3. His second phase has his clone disappear and Gemini Man will start walking around slowly as he occasionally fires shots and uses his shield. He is weak to the Magnet Missile.

Gemini Man appears in the level "recover the new parts". He fights similarly as in Mega Man: The Power Battle. The only differences are that in his second phase, he will summon Tsuranattoris to help him. He is also weak to the Pharaoh Wave.

Gemini Man is the last opponent in Episode 2. During his intro cut scene, he shows off his duplication abilities to Mega Man and Beat. He will then fight Mega Man. If Mega Man wins, he tells Mega Man that the door at the top of the temple is booby trapped and that he should go through the door in the middle of the temple. He collapses and dies right afterwards. If Gemini Man wins, he will kill Mega Man while laughing evilly.

Gemini Man makes a cameo as a battle memory. 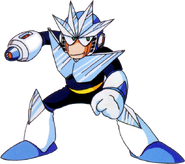