King of the Lilin

Reflecting on his plans.

Complete the Human Instrumentality Project and reunite with his wife Yui (failed).

Gendo Ikari is the main antagonist of the Neon Genesis Evangelion franchise.

In Japanese, Gendo is voiced by Fumihiko Tachiki, who also voiced Akainu, Don Krieg (both from One Piece), Menthuthuyoupi in Hunter x Hunter, and Megatron in the Japanese dub of Transformers: Robots in Disguise. In English, Gendo has been voiced by Ray Chase, Tristan MacAvery, and his current voice actor, John Swasey.

A loner by nature and notorious for frequently visiting bars and getting into drunken brawls, Gendo was seen by most people in his youth as somewhat of a delinquent and thug. Gendo himself claimed that the frequent fighting he was involved in was often the result of happenstance, rather than any deliberate provoking on his behalf, noting that most people quickly seemed to take an almost instinctive dislike to him. His relationship with his wife, Yui, was by all appearances the only happy and stable one he ever had, and she was the only one capable of bringing out kindness in him. After the disappearance of his wife, Gendo entered a state of shock and delusion that he could never completely overcome. Completely absorbed in his obsessive goal of recovering her, Gendo buried almost all his emotions, becoming a cold unfathomable being, only able to express kindness to his adopted daughter (and Yui's clone), Rei Ayanami. He cut himself off from his son, Shinji, and only contacted him years later to force him to become a pilot.

Most of the time Gendo is pondering his machinations, without showing any kind of fear or passion even in situations of combat, he expressed only slight signs of satisfaction when his plans were being fulfilled. Only the possible disobedience of his subordinates could make him demonstrate fierce military discipline, and not in few cases a very calculated cruelty. All the staff of NERV obey him properly, but find hard to treat with him.

In terms of his relationship with his son Shinji, it was revealed that the fractured familial bond between them have been beyond any hope of restoration ever since he abandoned him. The great pain and rage over losing his wife Yui drove Gendo to abandon Shinji and later manipulate him in whatever way was necessary as a pawn in his machinations to bring her back, regardless of how much this hurt him. This was worsened by the fact that at the same time, Shinji was already fractured so much that he was unable to do his best to do what was necessary to win Gendo's acceptance, as shown in the fight against Bardiel, who possessed Eva Unit-03, where he was unwilling to harm it because its pilot (Asuka in reboot films or Toji in original anime and manga) was trapped inside. In response to this, Gendo, instead of telling his son to take a third option and find a way to rescue the trapped pilot from the possessed Eva, activated Shinji's Eva Unit-1's Dummy System that resulted in the Eva brutally maiming Bardiel and severely injuring the pilot inside, with Shinji unable to do anything about it. Since Gendo was too absorbed in his obsessive goal of recovering Yui at any cost and being completely willing sacrifice his bond with Shinji in spite of briefly improving it and other people's lives when he deemed it necessary, there was very little that Shinji could do to restore their doomed relationship. 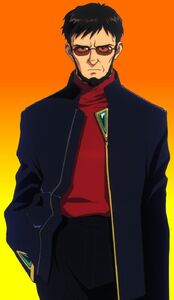