The Gene Worm is the main antagonist of the 1999 video game Half-Life: Opposing Force created by Gearbox.

The Gene Worm is the final boss of Half-Life: Opposing Force, and the most mysterious of the Race X aliens. This life form is said to be the equivalent of a "biological resource management factory." It is suspected to be capable of taking any of Earth's natural resources and assimilating it to make them useful to the aliens' needs. If one fully entered Earth and became productive, he would effectively alter the planet enough to become useful as a new homeworld for Race X. However, this was never shown in action.

Physically, the Alien resembles a green, worm-like being with many tentacles. It bears a striking resemblance to the Xen Tentacle, appearing to have green skin with many tentacles and possessing a beak-like protrusion similar in both shape and position.

The Gene Worm attacks with its tentacles and also ejects a deadly chemical stream from his mouth. Its outer hide is impervious to damage; in order to kill it, the player must blind him by shooting both eyes with the mounted laser guns on either side of the worm. This causes it to summon reinforcements by opening its abdominal cavity to reveal a portal orb that a Shock Trooper will teleport through. The worm's weakness is by firing any gun at the rear of this stomach cavity; It should be noted that the portal orb itself is not vulnerable. When the Gene Worm "dies", it sinks back into his portal, but not before emitting a "portal storm" into the room, similar to the one that occurred as the Nihilanth died. When it is idle and no threat is visible, it will gently sway its tentacles around and emit soft hissing and groaning noises.

The Gene Worm is found deep underground in a seemingly abandoned industrial area of Black Mesa and appears through a portal opening powered by Sprites in a room there, apparently either unwilling or unable to fully enter this world, most likely because of the minuscule size of the portal behind it in proportion to the Gene Worm's presumably immense size and length. The room itself has been fitted with mounted weapons which are powered by Xen energy crystals. The player character, Adrian Shephard, is sent down to the portal by a Black Mesa security guard, who remarks "Some of your buddies went down earlier, and I haven't seen 'em since." These soldiers were only able to set up the mounted weapons before their unseen demise, although nothing is seen of their remains, possibly indicating they may have been "processed" by the Gene Worm itself. 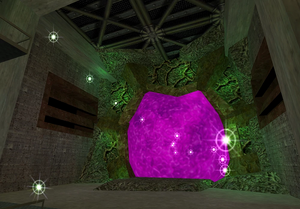 The Gene Worm emerging from the portal.

The Gene Worm's death.
Add a photo to this gallery

Retrieved from "https://villains.fandom.com/wiki/Gene_Worm?oldid=3995886"
Community content is available under CC-BY-SA unless otherwise noted.