Defeat the giant mantis (succeeded, but not in the way he hoped).

Abduct Liz and exploit her as bait for the giant mantis (briefly succeeded).
Prevent Ms. Frizzle and her class from rescuing Liz (failed).

Corrupt Official
The General Araneus is one of the characters from The Magic School Bus series. He is the main antagonist in the episode Spins a Web, which was his only appearance.

He was voiced by Ed Asner.

The Bus drove the kids to a cinema. They watched the 1957 film The Deadly Mantis. In the movie, Araneus has the role of killing the huge mantis, from making destructions. Carols and Phoebe didn't enjoy the film. Carlos has a fear of insects, while Phoebe didn't like the quality of the film. In a scene, soldiers are trying to kill the mantis with a bug-spray. Phoebe starts thinking if she was in the movie, that she would trap the mantis and bring it somewhere safe. Ms Frizzle then gets an idea, and brings the kids with the Bus inside of the film it's self.

In the film, they started searching for the general, which they did but the mantis end up cornering them. Everyone run back inside the bus which ends up with the general ejecting the class out from the film. While the General takes Liz with him-self, and Keesha and Phoebe end up becoming stuck inside of a big spider-web.

The two struggled to get out, but nothing worked. The spider arrives to them, but Tim end up cutting of the lines so Keesha and Phoebe fall inside of a big popcorn bag. As the class watch that the general is driving the Bus with Liz trapped inside. Liz end up pressing of the buttons with her tail in order to bring her class back inside of the movie. Liz end up getting off from the General, while Phoebe tries making a web to trap the general. But the general grabs Liz and manages to exit the Bus.

Ms. Frizzle then transform the Bus into a huge spider to find the general. While the general was on a ladder of the helicopter. The mantis end up following the helicopter, and the big spider managed to trap the general, but the general escaped. The general end up trapping his own self, and Liz uses her shrink ray to make the mantis small again. The episode ends with the class coming out from the movie.

The general also appeared at the end of the episode during a short segment called Producer Says, possibly having escaped the trap he accidentally set on himself. He was talking to the male producer about spiders, while Liz was making a web using string and chocolate as a trap for him, which later backfires after Liz accidentally traps the producer after the general walked out the door. 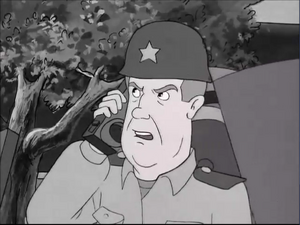 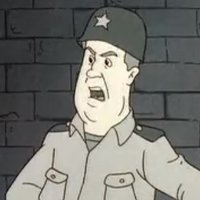 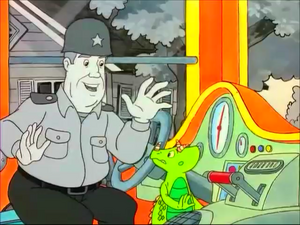 Retrieved from "https://villains.fandom.com/wiki/General_Araneus?oldid=3582778"
Community content is available under CC-BY-SA unless otherwise noted.