Member of the Hades Army

Sending out his Death Commandos to menace the Justirisers

Assist Kaiser Hades in destroying the Earth and conquering the Universe

General Bachuss is Kaiser Hades' second-in-command and the secondary antagonist of the first half of the tokusatsu show, Genseishin Justiriser.

Bachuss was summoned by Kaiser Hades after he was unsealed to assist him in destroying Earth and the Justirisers.

Follwing Twins Knights' defeat at the hands of Shirogane, Bachuss goes after the Justirisers himself in order to get them to invoke Shirogane. When they fail to summon him, Bachuss decides to mercilessly attack the Justirisers in hope that Shirogane manifests using Gentarou as a hostage before Mio arrives and the JustiPower knocks him back to Hades. He later appears on Hoshikami Island to eliminate Mio and Yuka to ensure Shirogane would never be summoned.

When Demon Knight attempts to aid him, Bachuss tries to kill both Demon Knight and the Justirisers. Bachuss tells Hades that he can handle the Justisers and goes to fight Kageri. After defeating her, Demon Knight confronts him. Unfortunately for Demon Knight, Shouta's interference gives him the opportunity to escape, leaving Shouta with the impression that Demon Knight hurt Yuka. Bachuss uses this to get Glen to take out Demon Knight, with him showing up to defeat Glen soon after. However, Kageri and Gant appear and battle Bachuss, soon being joined by Shirogane, who defeats and kills him. 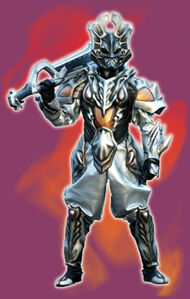 Retrieved from "https://villains.fandom.com/wiki/General_Bachuss?oldid=3536718"
Community content is available under CC-BY-SA unless otherwise noted.