Monologuing his goals to his comrades and Urzikstanis.

Punishing innocent people who won't subject to his rule.

Take over Urzikstan under the claim of "protecting" Russia from terrorism.

Get rid of all obstacles in his way.
Defeat the U.L.F. and Al-Qatala in order to destroy Urzikstan completely.
Kill Farah and Hadir Karim (all failed).

He is a Russian military general who leads an army of loyal Russian soldiers and mercenaries to purge and control Urzikstan in order to "protect" his country, believing it to be a "breeding ground" for terrorists. His goals lead him into conflict with the U.S. military, C.I.A., S.A.S. and the U.L.F. He is the archenemy of Commander Farah Karim and her brother Hadir Karim.

He was voiced by Konstantin Lavysh in motion capture.

Roman Barkov grew up in a town on the coast of the Black Sea. During his teenager years, Barkov took care of his elderly mother and would often shop and cook. Hindered by reading disabilities, Barkov tried but failed to complete trade school. Having developed an inferiority complex, Barkov longed to find excitement and feel power.

Roman entered the army illegally at the age of 16. Needing cooks, they accepted him for admission as his only marketable skill was the cooking he had learned at home. He also learned how to fire machine guns and anti-aircraft batteries.

Barkov enjoyed destroying targets, logging more range hours than his comrades. It was the first time in his life he'd been good at anything "strong". Roman continued climbing the ranks making him feel invincible.

In 1999, now as a Lieutenant, Barkov led a group of Russian soldiers to instiage a series of coordinated assaults on villages in the resource rich region of North-Eastern Urzikstan, which was carefully called "The Annexation" of the neighboring country. Seeing the country as a breeding ground for terrorists and thinking he alone could protect Russia, Barkov deployed chlorine gas-tipped bombs and unknown nerve agents, which were also unauthorized by Russian leadership. When gassed civilians were sent to hospitals, Barkov would have warplanes destroy those as well. He then ordered his forces to kill multiple civilians and rescuers, and then captured, imprisoned and enslaved any survivors.

During one of the attacks on the village Riyzabbi, Farah's mother, Fatima, died as a result of artillery bombing. However, Farah's father Walid rescued her just as Barkov sent his men and launched the gas attacks. Although they escaped to their home to Farah's brother Hadir, a Russian trooper codenamed J-12 came in and killed Walid, just before Farah killed him. As Farah and Hadir attempted to flee from Urzikstan, they were captured by Barkov and his men and sent them to a prison camp. Within hours, Barkov had full control over the entire country and this earned him an ultimate favor with his superiors, where he was promoted to the rank of General.

Knowing the West would turn a blind eye to his army's atrocities, as direct conflict between the two superpowers would result in an all-out world war, Barkov's unchecked tactics held Urzikstan under martial law and he would declare himself as "Novyy Korol", also known as the "New King" of the entire country. Seeing any and all rebellion or defiance as an insurgency and their perpetrators as terrorists, Barkov ordered scientists to combine existing weaponized chemicals to achieve three objectives: zero detectability, foiling of protective gear and 10 times the lethality in order to achieve his ultimate goal to rout out terror at the source. He then became aware of a rebel known as "Commander Karim", who was sending messages to the outside world about what Barkov was doing. Upon realizing that it was in fact Farah, who was still locked up along with Hadir, he had her placed in solitary confinement and tried to break Hadir by ensuring that Farah had no access to food or water for 10 days.

Eventually, in 2009, Barkov visited and interrogated Farah, waterboarding her until she revealed who "Karim" was, but to no avail. When he uses one of his own prisoners as leverage, Barkov would either execute her if she lies or stays silent, or boast that the resistance's "fearless leader has broken" and send the prisoner back to her cell if Farah admits she is "Karim". Afterwards, Barkov has Farah taken back to her cell and admits that he knew all along that she is "Commander Karim", before attempting to strangle her death after she refused to reveal whomever stole one of his keys. He is forced to stopped when his forces came under attack from Farah's rebels, and he decides to escape to safety cowardly. This resulted in Farah and Hadir escaping thanks to help from S.A.S. operative John Price, and thus sparked their war against the General, leading the Urzikstan Liberation Force (U.L.F.) against his army in a bid to rid the country of his cruelty forever.

For the next ten years, Barkov ended up on the watchlist of several Western intelligence agencies who couldn't make any direct action against due to still being a high-ranking General in the Russian Army, fearing that doing so will start a war with the country. This ultimately made him nearly untouchable. In 2019, he attempted to have more of his gas shipped to Urzikstan from one of his factories in Verdansk, Kastovia, in order to suppress any resistance in the country. However, his forces were intercepted by a C.I.A. team led by "Alex" and 1st Marine Raiders, who were sent to obtain the deadly gas before it would be shipped. This was one of many covert operations that were greenlit in order to undermine his control over the region. However, their operation failed due to the sudden appearance of insurgents, who had killed all the marines except "Alex" and escaped with the gas.

After the events in Kastovia, Barkov began having many people executed in public to set an example for anyone else who wouldn't do as he says, blaming them for what happened. During this time, Barkov would often display TV translations all across the city of Aqtabi, Urzikstan, monologuing his goals. Propaganda posters were also displayed all over city, which were seen by "Alex", who was sent to the country to help Farah defeat the Russian troops in exchange for assistance in finding the stolen gas. At the end of the day, Barkov lost his airbase to Farah and her forces with the aid of a helicopter. This caused Barkov to limit Russian air response in the area.

A few days later, "Alex", Hadir and Farah head to the Highway of Death to intercept the Wolf and deal with hostiles, including a suicide truck. When dealing with Al-Qatala, Barkov sent his men to destroy both forces. Although "Alex" managed to destroy the Russian transports, they then had to deal with the soldiers, forcing Hadir to unleash his secret weapon: Barkov's own gas, revealing that he was the one who stole them. As the Russian soldiers died, Hadir brought the two to a bunker before leaving, wanting to kill Barkov for his crimes.

Several days later, Barkov's estate was invaded by Al-Qatala forces led by Hadir, who then took Barkov's relatives hostage, as revenge for what Barkov did and to also find the chemical factory where the chlorine gas was being made. Wanting no loose ends, Barkov sent a helicopter to attack and kill them. However, they failed as Hadir was saved by Captain Price and Sergeant Kyle Garrick before being captured and handed over to the Russia to answer for his crimes. With intel on its location, Captain Price, "Alex", Garrick and Farah lead an assault on the chemical factory in Borjimi, Georgia. With Barkov on site, he order his men to stop them.

Being the coward that he is, he attempted escape via a helicopter, unaware that Nikolai and Farah had hijacked it. General Barkov attempted to call for help from Moscow in order to get Russia's support in dealing with the so-called terrorists, but is told that they were ignoring him, presumably because they found out from Hadir about what he did in Urzikstan. As Barkov refused to accept this, Farah attacked the General from behind, who retaliated by choking her. However, Farah stabbed him repeatedly and forced Barkov onto his back. As the General tried to bargain for his own life in an attempt to get his gun, Farah continued to stab him. Barkov would either die from his wounds or when Farah kicks him out of the plane, falling to his death, ultimately ending his cruelty towards Urzikstan permanently. His chemical factory is later destroyed after "Alex" detonated the charges.

Following Barkov's defeat and death, he is remembered as a war criminal and disowned by Russia for his heinous actions and crimes against humanity in Urzikstan. In the end, Kate Laswell explains to Price that Victor Zakhaev, son of the late Imran Zakhaev, wants Barkov's throne in Urzikstan. To add further disgrace to his name, Al-Qatala's new leader Khaled Al-Asad led their forces to invade Verdansk, Kastovia while also using some of Barkov's remaining chlorine gas to spark conflict between his enemies.

Outright delusional, psychopathic, sadistic and utterly ruthless, General Barkov is an over-patriotic fanatic who will do anything to achieve his goals. He will have whomever he sees on the wrong end or getting in his way killed without any hesitation or remorse. Viewing Urzikstan as the "breeding ground for terrorists", Barkov is extremely xenophobic and abusive towards its population, which is demonstrated not only by his tyrannical occupation through public executions and forced laboring, but is also demonstrated by his merciless repressions and genocidal actions towards them, and he doesn't spare even children. Other than having innocent Urzikstanis killed, Barkov is also not above havinghis own soldiers killed, for even the slightest of reasons, as evident by some dialogues in the game. However, Barkov is not lacking any other emotions, such as showing fear in the end when being stabbed by Farah Karim, even trying to bargain for his life, and would flee battles in order to save his own life all the time. All in all, Barkov is a cowardly hypocrite, who cannot see the fault in his own actions, and is more than willing to use any excuse to murder and torture innocent people via his war crimes. 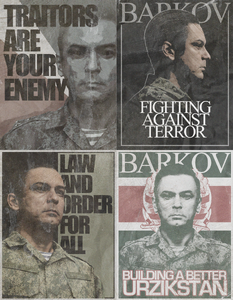 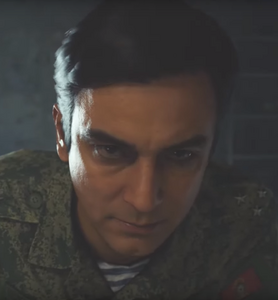 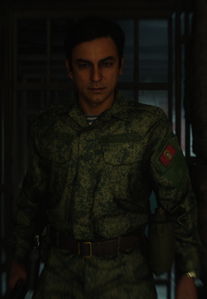 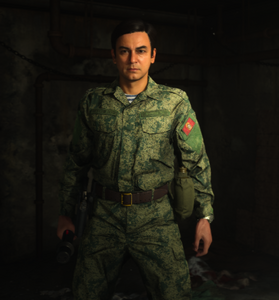 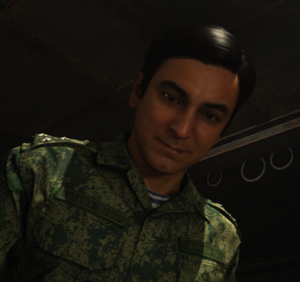 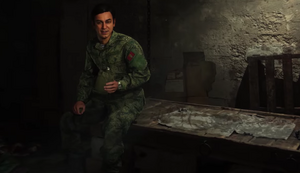 Barkov with his water canteen, before asking Farah if she wants a drink. 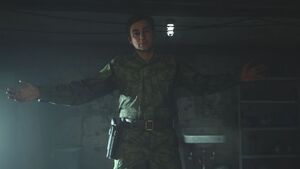 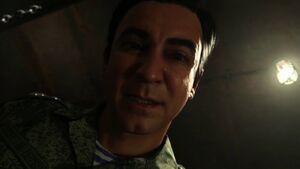 Barkov reveals that he knew that Farah was "Karim" all along. 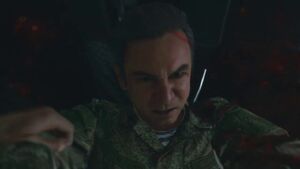 Barkov choking Farah after she attacks him on the helicopter. 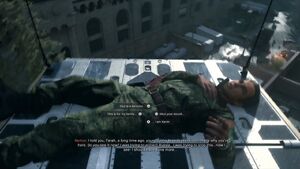 An wounded Barkov attempts to negotiate his life to Farah. 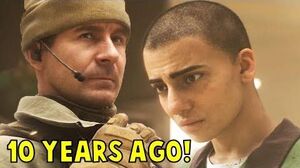 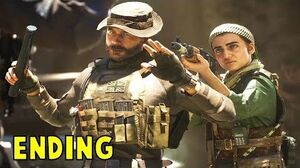