General Black is a Gel-Shocker executive and the secondary antagonist in the final arc of the original Kamen Rider series. He was originally a high-ranking member of Geldam stationed in Africa before his organization merged with Shocker and he became second-in-command to the Great Leader of Gel-Shocker. He has the ability to become the kaijin Hiruchameleon, enabling him to turn invisible and spawn blood-sucking leeches.

He was portrayed by Matasaburō Niwa.

Black was once an army official of the former Imperial Russia who quickly rose to the position of General when he was still young due to his cruel but effective tactics. Due to these tactics of torture and combat he struck fear into enemies and farmers of his country. After the fall of Imperial Russia, he was approached by the esoteric Buddhist group Geldam. Joining them, he went to Africa where he continued his terror campaign while keeping his uniform and position from the Russian army.

He was later contacted by Shocker's Great Leader, who proposed an alliance between Shocker and Geldam. Once the alliance was finalized and the two organizations were merged, with the Geldam Kaijin Ganikomol and the Gel-Shocker Combatmen exterminating all former Shocker members unfit for the new organization, General Black went to Japan to co-found Gel-Shocker.

Eventually, Black became Hiruchameleon who has ability to sucking blood by hugging human which later used to reviving Gel-Shocker Kaijin who already defeated by Double Rider, throwing leech which cause the target follow his order, and able turning himself become invisible. He used his new form to lure the Double Riders into a trap at an amusement park where they were forced to fight several revived Gel-Shocker kaijin. As Hiruchameleon, Black fought the Double Riders on roller coaster though their fight eventually led them away from that and onto a Shocker base.

Hiruchameleon was defeated by the Riders with their Rider Double Chop when turning invisible after weakened. Defeated, Black reverts to his human form cursing the Double Rider and exploded.

Along with Colonel Zol, Doctor Shinigami, and Ambassador Hell. He was resurrected by Doktor G to initiate Operation: Japan Annihilation using a new toxic gas called Girard Gamma. His assignment is Chugoku region. When Ambassador Hell captured by V3, he states Ambassador Hell is useless and waiting for Ambassador Hell execution until Great Leader interference stating they cannot afford to lose even Ambassador Hell when carried out their mission and let V3 go as he pleases. He died with the other revived commanders when Destron's base accidentally self destructed.

Hiruchameleon is seen as a minor member of Super Shocker. He fought against Yuusuke Onodera, the A.R. Kamen Rider Kuuga, but he was quickly defeated.

After a Shocker Grunt found a Cell Medal dropped by a time-traveling Ankh, General Black presented it to the Great Leader where it became the Shocker Core Medal and created the Shocker Greeed. With their new Greeed-Kaijin hybrid, Shocker was able to defeat the Kamen Riders, resulting in an altered timeline where Shocker achieved their goal of world dominion by 2011. In this new timeline, Black served as one of the top generals of Shocker's new world order.

In the alternate timeline created by Shocker using the History Modifying Machine to alter the flow of time so the Kamen Riders were defeated by Kamen Rider 3, General Black appears in the present as an executive of Shocker, which now dominates the entire globe.

He disguised himself as Tobei Tachibana in order to lure Yuto Sakurai/Kamen Rider Zeronos into a trap at the Hongo residence that supposedly housed a "Rider Town" where the Double Riders' brains were stored. Once Yuto had fallen into the trap and the Great Leader's spirit appeared, Black dropped the disguise and revealed his true form as Hiruchameleon.

In the final battle, he was destroyed by Kamen Rider Mach's Full Throttle. 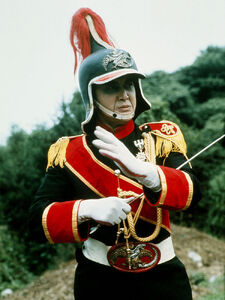 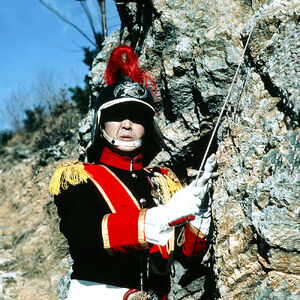 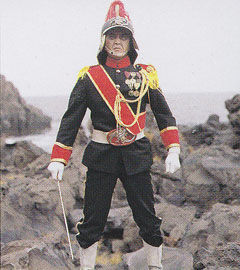 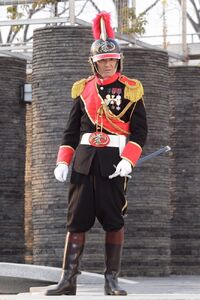 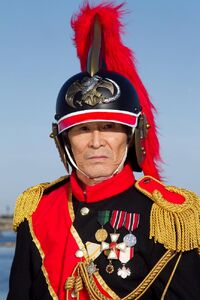 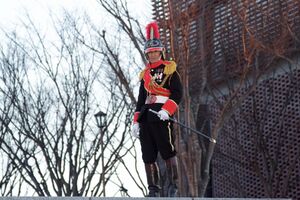 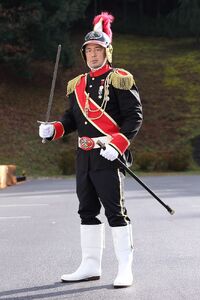 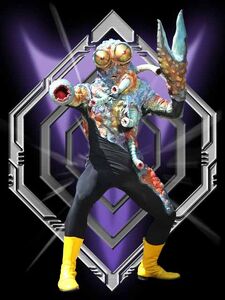 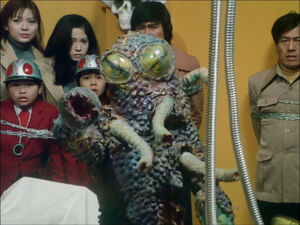 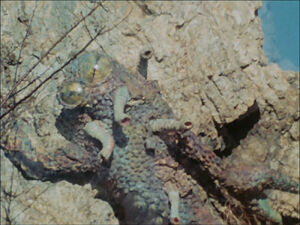 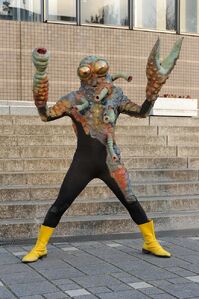 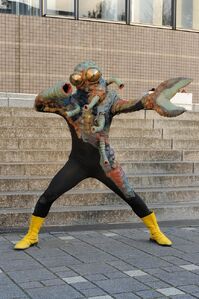 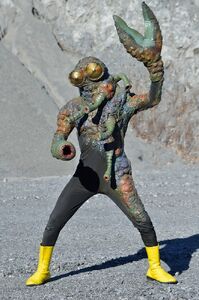 Retrieved from "https://villains.fandom.com/wiki/General_Black?oldid=4364504"
Community content is available under CC-BY-SA unless otherwise noted.