General Black is a Gel-Shocker executive stationed in Africa with the ability to become Hiruchameleon. He is a major antagonist in the final arc of the original Kamen Rider series.

Black was once an army official of the former Imperial Russia who quickly rose to the position of General when he was still young due to his cruel but effective tactics. Due to these tactics of torture and combat he struck fear into enemies and farmers of his country. After the fall of Imperial Russia, he was approached by the esoteric Buddhist group Geldam. Joining them, he went to Africa where he continued his terror campaign while keeping his uniform and position from the Russian army. He was later contacted by Shocker's Great Leader and went to Japan founding Gel-Shocker. Becoming Hiruchameleon who has ability to sucking blood by hugging human which later used to reviving Gel-Shocker Kaijin who already defeated by Double Rider, throwing leech which cause the target follow his order, and able turning himself become invisible. Later he fought the Double Riders on roller coaster and was defeated by their Rider Double Chop when turning invisible after weakened, reverts to his human form cursing the Double Rider and exploded.

Along with Colonel Zol, Doctor Shinigami, and Ambassador Hell. He was resurrected by Doktor G to initiate Operation: Japan Annihilation using a new toxic gas called Girard Gamma. His assignment is Chugoku region. When Ambassador Hell captured by V3, he states Ambassador Hell is useless and waiting for Ambassador Hell execution until Great Leader interference stating they cannot afford to lose even Ambassador Hell when carried out their mission and let V3 go as he pleases. He died with the other revived commanders when Destron's base accidentally self destructed.

Hiruchameleon is seen as a minor member of Super Shocker. He fought against Yuusuke Onodera, Kamen Rider Kuuga, but he was quickly defeated.

In OOO, Den-O, All Riders: Let's Go Kamen Riders after a Shocker Grunt found a Cell Medal dropped by Ankh, General Black presented it to the Great Leader where it became the Shocker Core Medal and created the Shocker Greed. He is later killed against Kamen Rider OOO. 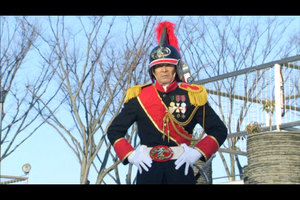 General Black
Add a photo to this gallery

Retrieved from "https://villains.fandom.com/wiki/General_Black?oldid=2829070"
Community content is available under CC-BY-SA unless otherwise noted.