Dictator of the island of Vilena

Leadership
Answers to nobody except James Munroe

Profit from drug dealing in Vilena with James Munroe

General Garza was the secondary antagonist in the 2010 film The Expendables. He was a South American general who ostensibly ruled the island of Vilena for over 20 years.

He is portrayed by David Zayas, who also played Sal Maroni in Gotham.

Garza is the dictator of the fictional island of Vilena and has a daughter named Sandra. He works with a mercenary named James Munroe, but Munroe constantly belittles him and humiliates him in front of his own soldiers. The Expendables are hired to travel to Vilena in an attempt to overthrow Garza, and Garza eventually believes that Munroe hired them to kill him. Deciding that he has enough, Garza angrily returns Munroe's money and demands him to leave. He later makes a speech about how he has succumbed to greed and apologizes to his daughter because of it, and claims that he is going to fight the "American disease", in reference to Munroe. In response, Munroe shoots Garza dead, sending his body toppling over the balcony of his palace. Garza's death would later be avenged when Ross and Lee kill Munroe to save Sandra's life. 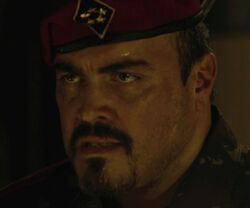 Garza being shot by Munroe
Add a photo to this gallery

Retrieved from "https://villains.fandom.com/wiki/General_Garza?oldid=3571043"
Community content is available under CC-BY-SA unless otherwise noted.