Hunting down for Chuck.

Get capture Charles Baker in order to find out his "invasion " plans (formerly).

General Grawl is the main antagonist of the 2009 movie Planet 51. He is a high-ranking alien military officer who believes that his planet is under attack from alien invaders (in reality the "alien" is a clueless human astronaut who is no danger to anyone).

He is voiced by Gary Oldman, who also portrayed Count Dracula in Bram Stoker's Dracula, Drexl Spivey in True Romance, Norman Stansfield in Léon: The Professional, Jean-Baptiste Emanuel Zorg in The Fifth Element, Egor Korshunov in Air Force One, Ruber in Quest For Camelot, Mason Verger in Hannibal, Carnegie in The Book of Eli, Lord Shen in Kung Fu Panda 2, Dreyfus in Dawn of the Planet of the Apes, Vladislav Dukhovich in The Hitman's Bodyguard, Daniel Clarke in Call of Duty: Black Ops and Dr. Zachary Smith in Lost In Space.

Driven by a fear of the unknown, General Grawl becomes a menace to himself and his men as well as (somewhat ironically) his world as he becomes obsessed with not only capturing the "alien" but in either killing him or having his brain removed.

However in the end of the film, General Grawl is redeemed when he is rescued from his self-destructing base, making him finally realize that the "alien" was not a threat and also opening his eyes to the fact that blind ignorance and fear is far more dangerous than imaginary threats.

General Grawl
Add a photo to this gallery 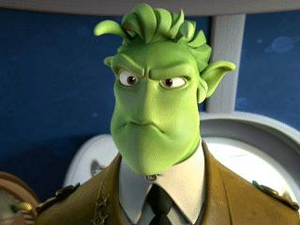 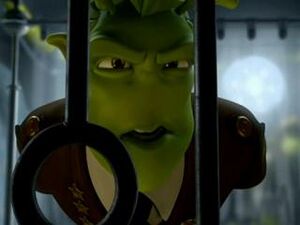 "Take us to your leader."

General Grawl and his soldiers follow Rover, so he can guide them to Chuck.

(Captain: "All these uniforms, sir. How do we find the alien?") "Simple, Captain."

"Time to meet the monster, face to face."

"Look at it, Professor. It's hideous!"

"Alright, let's get these aliens to Base 9!"

"Not that it exists."

Add a photo to this gallery
Retrieved from "https://villains.fandom.com/wiki/General_Grawl?oldid=3516324"
Community content is available under CC-BY-SA unless otherwise noted.