Hunt down and arrest the agents of S.H.I.E.L.D. (failed).

To capture and fuse Daisy Johnson with the Gravitonium (failed).
Avenge the death of her daughter, Ruby (failed).

General Hale is the central-antagonist-turned-anti-hero of the second half of Season 5 of the ABC TV series Marvel's Agents of S.H.I.E.L.D., set in the Marvel Cinematic Universe. She is a high-ranking officer of the U.S. Armed Forces who formulates a plot to arrest any remaining S.H.I.E.L.D. agents following the Framework simulation conducted by Holden Radcliffe. She is also the mother of Ruby Hale, who acted as her main assassin and right-hand. She is also revealed to be the last surviving sleeper agent and leader of HYDRA.

She was portrayed by Catherine Dent.

Following the death of Hale's superior Glenn Talbot, Hale decided to take action by ordering the arrest of all S.H.I.E.L.D. agents after learning that Daisy Johnson (actually a Life-Model Decoy of the real Daisy Johnson) was the one responsible for Talbot's death. Even when being told by a captive Leo Fitz about the true circumstances behind the incident and that Talbot has actually survived, Hale refuses to give up her pursuit on the S.H.I.E.L.D. agents.

After killing two of her subordinates for their failure, Hale confronts her daughter Ruby for missing class, and advised her to tag along with her plan to hunt down S.H.I.E.L.D.. Though Ruby agrees to do this, she questions her mother of her motives by pointing out that S.H.I.E.L.D. used to be praised as good guys until the Framework incident, to which Hale responded that her actions were due to orders by people that she needs to answer to, promising that she's only doing this for Ruby and all the other unfortunate citizens.

Locking Up Her Daughter

When the S.H.I.E.L.D. agents have resurfaced, Hale sends Ruby to spring the trap on them under a false intent on peaceful negotiation. To that end, she sends in robot soldiers to help Ruby capture them, but Ruby planned on killing them in an intent to lure Daisy to her, which resulted a backfire that allowed the S.H.I.E.L.D. agents to escape.

Confronting Ruby in her bedroom, Hale states her disappointment for what Ruby did, but Ruby defended her actions by declaring it an opportunity to find Daisy. Unperturbed by this, Hale furious locks Ruby in her bedroom and hires Carl Creel as her new right-hand. Despite Creel's suspicions over Hale's true motives, he agreed to join her to hunt down the S.H.I.E.L.D. agents.

Upon learning tat Werner von Strucker is currently in a mental hospital, Hale gets Ruby to recruit him to their cause, despite some beef that Werner had with Ruby during their early training days in HYDRA.

However, Hale ends up being captured by Phil Coulson, who interrogated her about her true motives and her daughter's actions against Yo-Yo Rodriguez. However, Hale had Creel to gain control of the S.H.I.E.L.D. agents' plane, allowing her to take Coulson as her prisoner.

Gaining the possession of a certain element called Gravitonium, Hale intends to use it to for a secret HYDRA project called Project Destroyer of Worlds (created by the late Daniel Whitehall and Wolfgang von Strucker), which involves recreating a super soldier by designing an individual capable of taking on the properties of any known material. However, the project backfired when Creel broke Coulson and Talbot free after learning about Hale's true intentions.

Betrayed by Her Daughter

An angry Hale order Ruby to track down the men and kill them, but Ruby has had enough of her mother as she tried so hard to earn her acknowledgment. In her bedroom, Ruby manipulated Hale into letting her guard down by proclaiming that they were both weaknesses to each other, prompting a sorrowful Hale to embrace her daughter, only to end up being knocked out and left behind inside Ruby's bedroom.

Hale is considered to be very stern and no-nonsensed for a general, and is very obsessive in hunting down S.H.I.E.L.D. agents for the death of Talbot; even when being told about the true circumstances behind Talbot's death, Hale refuses to give up her pursuit, implying darker purposes that she may have in mind with the agents.

She can also be quite demanding and abusive towards her own daughter Ruby, even berating her for missing class and locking her up in her bedroom as punishment for her intentional failure to capture the S.H.I.E.L.D. agents. 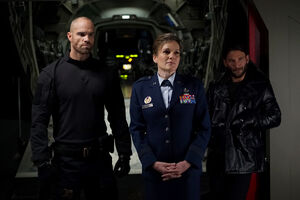 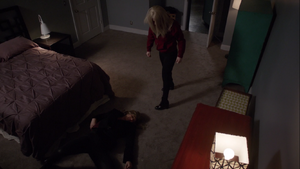 Hale betrayed by her daughter
Add a photo to this gallery

Retrieved from "https://villains.fandom.com/wiki/General_Hale?oldid=3409423"
Community content is available under CC-BY-SA unless otherwise noted.