Secretary of Defense (formerly)
Acting president of the United States

Garnering power for himself.

General John Hemlock is the main antagonist of Dead Rising 3, standing in as the official overseer of Los Perdidos during the zombie outbreak.

He also is working with Phenotrans to ensure that crucial zombie samples are collected and that all traces of their activities - as well as the zombies - will be eradicated in the ensuing firebombing. He intends to strategically cause further outbreaks across the entire country, which would allow him to create a constant state of martial law and effectively make him the de-facto dictator of the United States.

He was voiced by Robert Craighead.

General Hemlock is the Secretary of Defense of the United States of America, leads comment of the army and the air-force, and is the leader of the ZDC, a anti-zombie agency. His main goal is to kill the president, vice president, and everyone else that tries to stand in his way to become president so he can start a plot to either infect or contaminate the area around other powerful leaders so he can overthrow them.

At the start of the game, he, along with Hilde (who looks after the safety of everyone in the city), is seen delivering a speech on television Sonya ordering Los Perdidos to be firebombed when no organic life is spotted in the areas that are quarantined. However, his real plan is to use Hilde to kill any possible threats to their plan, regardless of them being real threats. On top of this, this allows him to be an oppressive dictator under martial law, something he wish to keep happening, as he makes Sonya be trapped in the fight and become a zombie.

In Chapter 4, Hemlock talks to Marian Mallon, as she wishes to hold back the bombing so she can track Diego and Nick Ramos, which he agrees. He then orders the President to be brought to him so he can infect her. His plan succeeds as the radio declares Sonya to be infected and Hemlock is now the "Temporary President of the United States" as he declares all surrounding areas to be on lockdown. Unsurprisingly, this upsets Nick greatly, due to him knowing that the president was killed on purpose.

In Chapter 6, Hemlock appears in the flesh, as she rescues Marian after she is trapped under rubble.

In Chapter 7, Nick and his friends are successful in rebuilding the plane and getting fuel, but they are distracted by Ronald Jackson, who lures Nick, Annie, and Isabela to a open area right where Hemlock's forces are waiting, who lock the latter two in a storage crate, as Ronald declares he's going to get a large bounty for Nick's death. However, Nick bests Ronald and the forces, as Hemlock demands a update on Nick's capture. Despite warning, Nick impersonates one of the forces, successfully convincing Hemlock to add a extra day to the deadline. Before they could fly away, however, Hemlock orders he needs a substance that King Zombies emit prior to the fire-bombing. Nick, along with Chuck Greene, pursue his aircraft to a landing pad so they can stop him. At the landing pad, Hemlock arrogantly declares that he can create a outbreak wherever he wants, and it'll be allowed by martial law and he'll still be the President. Marian denies his offer as she must find the orphan who has the cure, but Hemlock shrugs the cure off as a myth. Due to her refusal, Hemlock then chucks the unlucky helper to her demise, as he orders the collection to begin before the fire-bombing.

Meanwhile, Nick and Chuck destroy the drones used to collect the samples, as Nick uses a drone to attack the unfortunate pilot of the aircraft, causing it to crash in the middle of Los Perdidos, with one of it's rotors still working. An enraged and injured Hemlock tries to kill Nick with a grenade launcher and in hand-to-hand combat, but fails to beat him. After informing the general Nick does indeed have the cure, he then launches him into the rotor, tearing the poor general into pieces.

Hemlock demonstrates a lot of power-hungry characteristics, such as building upon the chance to cause outbreak after outbreak for profit and his arrogant belief in his own superiority. While he is shown to be fond of Marian Mallon (even rescuing her after her attempt to prevent Nick from escaping her lair fails), he ultimately decides to kill her when she continues to disrespect him. He also shows off considerable skills in hand-to-hand combat and marksmanship considering his tactics in the final boss battle against him. 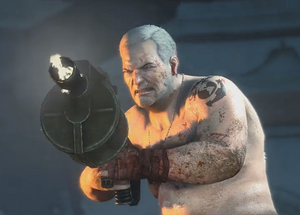 Hemlock during the final battle.

Nick kicking Hemlock to his demise.