Centuries worth of war experience

Destroy the Doom Patrol and the Teen Titans

Militaristic Immortal
General Immortus is a villain from the DC Comics franchise. He is a member of the Brotherhood of Evil.

General Immortus is centuries old, and his origins are shrouded in mystery. He once owned a diamond mine, the source of his wealth, and he killed many of the workers to keep the location a secret. Thereafter, most of General Immortus's schemes were to sustain his longevity and thusly he became the leader of a criminal syndicate to steal ancient mystical artifacts for this purpose. He lives indefinitely due to a life-extending alchemical potion, although he lost the formula. As his potion began to run out, he hired young scientist Niles Caulder to recreate the potion. When Caulder discovered Immortus's identity and plan, he sabotaged the "life extending ray" that he had been developing. Caulder, as "The Chief" later formed the Doom Patrol specifically to combat one of Immortus's later schemes.

From time to time thereafter, Immortus sparred with the Doom Patrol, usually in an effort to obtain the results of the Chief's life-extension research. Immortus was a one-time member of the Brotherhood of Evil, a group formed largely to combat the Doom Patrol.

A second Doom patrol was initiated by an Indian woman named Arani, claiming to be Mrs. Niles Caulder and calling herself Celsius. The General submitted her to a mind scan to find the secret to immortality, and managed to become young for the briefest moment on his Moon Base until the Doom Patrol got free and started to destroy the base as he began regressing to his former senescence. It turned out the immortality treatment failed because it had been prepared specifically for Arani's physiology.

He was seen in Salvation Run, where he was apparently killed by a Parademon.

Immortus reappeared, alive and well, and referred to the events of Salvation Run as having been an eye-opening experience for him. He is now recruiting followers and having Professor Milo operate upon them to give them powers, including established non-powered villains Sportsmaster, Mr. Polka Dot, Condiment King and the Human Flame. He ensures that use of these abilities causes pain until the villains have proved themselves unconditionally.

General Immortus appears in Teen Titans as a member of the Brotherhood Of Evil. He was voiced by Xander Berkeley, who also voiced Warp in the same series, and portrays Gregory from The Walking Dead.

General Immortus appears is a big, immortal soldier that survived through battles. Immortus's main power is immortality and also known as The Forever Soldier. He had been led troops since the ancient times till WW2 as his uniform indicated that he once served under the Nazis.

General Immortus first appeared in the episode, "Homecoming Part 2" where he was first mentioned by Mento, one of the members of the Doom Patrol. The Brain sent Immortus to fight Beast Boy and the remaining Doom Patrol members (because Rockman was defeated). Beast Boy and Mento were able to escape the clutches of Immortus. As Beast Boy and Mento entered the Brotherhood of Evil's hideout, Immortus showed up and caught the two heroes off guard, sending his soldiers to attack, but Robin, Starfire, Raven, Cyborg, and the other members of the Doom Patrol (who survived) fought back. 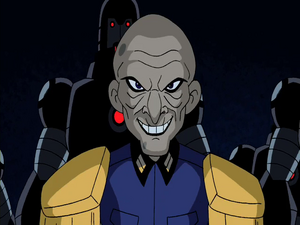 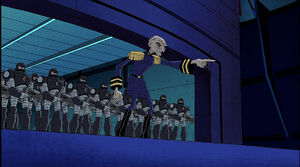 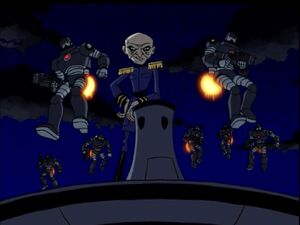