General Ironbeak is an anthropomorphic raven and the secondary villain in the Redwall series book, Mattimeo as well as the second season of the Redwall TV series. Like all ravens, Ironbeak was very cunning and savage, and was also very arrogant, calling the mice, otters and other woodlanders "earthcrawlers".

Ironbeak and his crow seer Mangiz lead a flock of rooks and magpies that came from the Northlands. When he learned about Redwall Abbey, he sought to conquer it, and thus lead an attack upon the Abbey. Unfortunately, the warriors of Redwall were all gone, off chasing Slagar the Cruel with their captured children, so at first Ironbeak has very little resistance. Eventually, however, the Redwallers fought back, using tricks and clever maneuvers to confuse Ironbeak and his dark birds, but the evil raven continued the fight relentlessley.

When Stryke Redkite came to the Abbey, Ironbeak's rooks attacked her, but the Redwallers rescued her and helped to heal her broken wing. Ironbeak did not believe his rooks when they told him about the "big red bird", a mistake that he would soon regret. Ironbeak eventually took over the entire Abbey by night (as he had already conquered most of it), and held the Redwallers captive, preparing them for execution. Then Stryke Redkite burst into the room, tearing apart the black birds and attacking Ironbeak.

The two birds battled, and Ironbeak ended up dead from a brutal blow of the kite's talons. His remaining followers were sent away on oath to never return again. 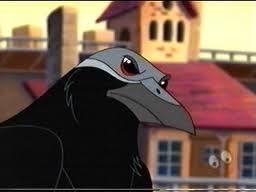 Ironbeak in the Redwall TV series.
Add a photo to this gallery

Retrieved from "https://villains.fandom.com/wiki/General_Ironbeak?oldid=3454477"
Community content is available under CC-BY-SA unless otherwise noted.