Head of the Kazakh Federation

Collecting all sorts of weapons

General Mikiel (known by several generic titles in Japan including the Holy Marquis and Kazakh High Officer) is a secondary villain from the Strider series, appearing as the main enemy at the end of the 1st stage, and returning as an early antagonist in the 2014 Strider remake, now officially called Mikiel in Japan.

General Mikiel is a highly decorated military officer who served the Kazakh Federation. After the sudden appearance of Grandmaster Meio on the world in the year 2042, Mikiel quickly switched allegiance and joined his side. Turning into one of Meio's loyal followers, Mikiel became the head of the Kazakh Federation's ruling party, gaining total control of the country's political and military power in the name of Meio. Besides his direct representative on Earth, Mikiel also became the overseer of the Grandmaster's army on Earth as well due to his status as a veteran soldier. Through unknown means (albeit likely by Meio's hands), Mikiel and the other 23 officers in the ruling party gained the ability to merge into a centipede-like monster known as "Ouroboros", a powerful entity wielding Russia's sickle and hammer as weapons.

Mikiel governed the capital city of Kazakh with an iron fist, but his overly oppressive and reckless handling of his political power led Eastern Europe into difficult times. The country suffered a great financial crisis and the citizens rebelled against the government, gathering in rebel forces that clashed in combat against government troops all over Eurasia. It is through these insurgents that the Striders are hired to rid the world of the Kazakh Federation's true leader, Grandmaster Meio, and Hiryu is given the mission.

Hiryu's first action was to infiltrate St. Petersburg, capital of Kazakh and the city with the closest ties to Meio, in order to investigate. He eliminated all obstacles in his way and reached the council chamber, where a confident Mikiel ordered the other officers to form Ouroboros. Unable to beat the Strider in combat, Ouroboros is finally destroyed. Back in his human form, a wounded Mikiel can do nothing but curse at Hiryu, telling him that he he can't defeat his "Lord" and that everything in the world belongs to him. What happens to him afterwards is unknown.

In the 2014 Strider remake, Mikiel retains the same role. He quickly turned against his country, seizing total control of the city of Kazakh in the name of Meio. He became the sole ruler of Kazakh City being not only its ruler, but also its military overseer as well as head of every other area such as the Transit and Propaganda departments. Mikiel maintains an opressive regimen over the citizens, constantly broadcasting orders and reminders about laws, curfew times and punishments for disobedience, as well as encouraging citizens to report any rebel activity among their neighbors. Mikiel is also given the unique hobby of weapon collecting, having amassed a large collection of assorted weaponry, including a one-of-a-kind hover tank called "Tornado". After losing half of his body during a previous war, he had his body fully turned into a machine, effectively making him "part of his collection".

Once he learns of Hiryu's infiltration of Kazakh City, he enforces martial law in the city district and sends in the Grandmaster's bounty hunter team to deal with him. Following the defeat of Pei Pooh he has a meeting with the bounty hunter Solo, where he expresses his confidence in the Winds while Solo is certain they will fail. As Hiryu remains undefeated, Mikiel is eventually ordered by Meio to hire Solo's services as well. In the end Hiryu survives every encounter and meets up with Mikiel within the Military Headquarters. Mikiel lures Hiryu into entering the hangar where his Tornado is found, and he atttempts to use it to kill him with no success. Coming out of the destroyed tank Mikiel confidently remarks Hiryu has no chance of winning because he only has a "knife" while he has a gun (ignoring the fact he just lost his entire battle tank against that "knife"), then shoots at him only to have his shot reflected back, killing him instantly.

General Mikiel is an old man sporting an almost bald head with some graying hair still remaining. He wears the ruling party's military uniform consisting of a gray long coat and hat with golden shoulderpads, with both coat and hat sporting the red half-star logo of the Kazakh Federation.

In the 2014 Strider Mikiel is now a younger adult instead of an old man, and sports a fully cybernetic green body with long, backwards-turned legs. He wears a black Russian top hat and a red overcoat he keeps on his shoulders like a cape. He also sports a band on his chest displaying the many medals he won during active duty.

General Mikiel is a corrupt and opressive officer, governing over the citizens through fear. He demands total obedience to his rule and punish the slightest disobedience harshly, under the belief it'd otherwise lead to chaos. Mikiel is constantly power-hungry and always seeks to gain even more power and influence, greatly enjoying displaying his authority over others and the power of his military might. He cares not for the well-being of the country or the citizens, and does everything to satisfy his ego. The fact he's merely a subordinate of the true world's leader doesn't seem to bother him at all, as long as he has a power and control.

Mikiel is always scheming and an opportunist, gladly turning himself into an ally of whoever is in charge instantly only because he wants to secure a high-ranking position in the ruling government. His betrayal of Kazakh for Meio was specifically so he'd be granted a position of power, managing to become the head of the country's political and military sections.

In the original game, General Mikiel has no notable abilities beyond his military background, and instead gains power once merged into the form of Ouroboros.

In the 2014 Strider, Mikiel's body is fully cybernetic and grants him great dexterity and agility, being able to dodge and keep a decent lead when pursued by Hiryu. He fights wielding a large-caliber firearm which shoots fireballs that rebound off surfaces, difficulting its evasion. His greatest weapon, however, is his beloved tank Tornado. Tornado is equipped with a huge amount of weaponry including a laser-based main cannon, several turrets, a metal front used for ramming, a large rack of seeking missiles, flamethrower pods, six-barreled gatling gun and chainguns. The tank is designed in such a way that its internal structure can only be controled by Mikiel himself, and this (plus its exhorbitant cost) prevented such a powerful vehicle to enter mass-production.

Ouroboros is an apparent mechanical creature formed by General Mikiel and the other 23 officers in Kazakh's ruling party. Mikiel transforms into the head while the other officers take the form of several 2-legged segments forming its long body. Although a machine at first sight, whether it is actually a robot or a living being is unknown. Even after being destroyed Mikiel appears to be able to survive by turning back to his human form.

Ouroboros wields two weapons it swings widly at its enemies: a sickle and a hammer, in reference to the Sovet symbol sporting the two tools. Ouroboros moves around the stage, pursuing Hiryu while swingings its weapons and shooting three spread shots from the guns on its head. Ouroboros can turn and twist around its long body, as well as move backwards in its attempts to get Hiryu or throw him off its back. 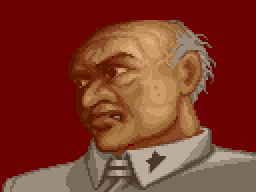 General Mikiel in the original game.