General of the Galalunian military (formerly)

Kill Princess Ilana in order to get rid of the last heir to the Galalunan throne and takeover the entire planet of Galaluna (ongoing).

General Modula is the main antagonist of Sym-Bionic Titan. He was once the General of the planet Galaluna, and a dear friend to the king. But during a battle at an enemy planet Muttrad, the army and the king barely made it out alive, but unfortunately left Modula alive, then Modula changed and lead the Muttraddi to invade Galaluna to take revenge on them. Now he was after the princess of Galaluna, Ilana so he can fully rule Galaluna.

He was voiced by Don Leslie.

Modula was once a close friend to the king and his most trusted general. As shown during flashbacks, he was an honorable and respectful man to everyone, even the princess. He was present during an award ceremony for a young Lance, but a fight between Lance and his school rival, Baron, ruined the ceremony. Modula personally intervened and the two were punished.

At some point during the war with the Mutraddi, the king and his general arrived at the enemy homeworld and did battle. Modula was caught in an explosion and the king was forced to retreat, unknowingly leaving him for dead.

Modula survived, by unknown means, and desired revenge against his former friend. Having spent several years on Muttrad, enslaving many creatures and apparently showing some of them how to speak, Modula convinced a captain on Galaluna to aid him in an invasion of his former homeworld.

While the said captain was killed, Modula's involvement was kept secret until after the king was captured and Ilana, Lance and Octus escaped.

In the past, Modula was a kind, respectful, authoritative, and honorable man who was happy to serve his king and princess. Following being unintentionally left for dead, the man he once was died and became a vengeful and oppressive conqueror out to enslave the world he once gave his life for. Modula is dedicated to destroying all hope in Galaluna, sending numerous Muttradi beasts to kill Ilana to crush any chance of defeating him. It becomes clearer that Modula doesn't care how many other worlds he must destroy to achieve this, as one of those creatures was living bomb capable of destroying an entire world, all to kill one girl. While he may appear stoic, fearless, and emotionless, Modula shows his sadistic pleasure when things go his way, such as breaking the neck of a Galalunan soldier with his bare hands. He also doesn't have qualms about killing his own men; one Muttradi he vaporized on the spot when his bomb plan seemingly failed or when he killed an alien who offered his beast's services when it was destroyed (although to be fair, the alien bet his life on his beast). 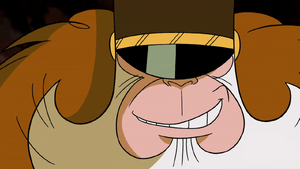 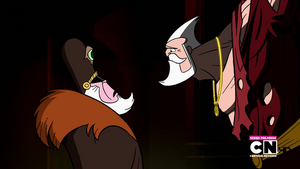 Modula with his old friend The King 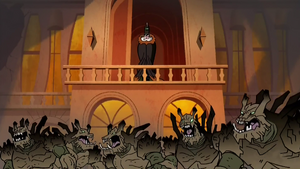 Modula wathcing over the Muttradi 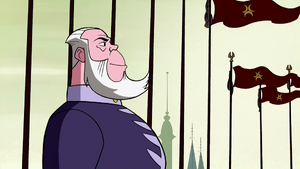 Retrieved from "https://villains.fandom.com/wiki/General_Modula?oldid=4372780"
Community content is available under CC-BY-SA unless otherwise noted.