Ordering his army and bounty hunters to hunt Krel and Aja.

Get revenge on the King and Queen by dethroning them (succeeded).

Take over Akiridion-5 (briefly succeeded).
Kill the remaining Royals (failed).
Find Gaylen’s core and absorb its power to become a godlike being (succeeded).
Destroy the universe and reshape it in his own image (failed).

He is a former general of the planet Akiridion-5 who was exiled for his treachery, and in turn, returned and took over the planet through a coop. He is also the one in charge of the bounty hunters who are raiding through the galaxy in order to hunt the royals, Aja and Krel Tarron, as well as the mastermind behind the death of the family of Varvatos Vex.

He was voiced by Alon Aboutboul, who also played Aamir Barkawi in London has Fallen.

General Morando was once a general of King Fialkov and Queen Coranda's armies but was exiled from the planet Akiridion-5 for trying to seize power by force. Eventually, he concocted a plan to set him free. So, he hired the Zeron Brotherhood to kill Varvatos Vex's family so Vex can be vengeful and listen to Morando. Then the day before Morando's coup, he asked Vex to lower the shields.

On the day of Aja and Krel's coronation, Morando orders his forces to begin attacking Akiridion-5 after the shields were lowered by Varvatos. He later confronts the Tarron family in their palace, where he forces his men to shoot at the King and Queen, causing them to lose their physical bodies. After immediately seeing his mistake, Varvatos takes the royal cores and retreats into the Mothership with the heirs, while Zadra stays behind and buys them time to escape.

Later, Morando orders his V-Strikers to pursue the Mothership, but it becomes too late when they escape Akiridion-5 through hyperspace. A soldier reports to the exiled general that they were unable to track the House Tarron Mothership, due to their own ships not being properly equipped for space-travel. Out of disappointment, he kills the soldier and assembles several bounty hunters to find the royal children and bring their parents' life cores to Morando, saying that he will reward them.

Morando then enters the room Zadra was imprisoned in, and convinces her to be his lieutenant, but Zadra refused, so Morando left. Sooner, Zadra and Izita, who were in the room, escape, and Zadra becomes a member of the Resistance as a spy in Morando's forces.

Then, Morando takes control of Akiridion-5 while many Akiridions protest that he was never the rightful king.

Morando then asks Loth Saborian on the status of the Omen project. Loth says that it is difficult, but Morando threatens that he will kill him.

Later, Morando sees that the first Omen is ready, he says that the age of Omen has begun. He orders it to go across the planet, and kill all the rebels. Since the first Omen was made, Morando makes sure no one worships the royals, with the blanks and soldiers give the Akiridions a final warning, with a child among them. Then Morando realizes that Zadra was a traitor, and orders the Omen to go after them. Zadra then flees to Earth, to Aja and Krel.

After being defeated by Aja and Krel, the Zeron Alpha sends Morando the location of the royals, planet Earth. The Omen was then sent by Morando to eliminate the royals.

Then Morando orders the Omen he sent to take King Fialkov and Queen Coranda’s cores. Apparently, Aja came to stop Omen. While Omen tries to hack Mother and fly, Aja tries to fight him. Morando taunts Aja, saying that if she destroys Omen, so will the King and Queen. While Omen ends up putting a self-destruct sequence, Aja tries to stop Omen while it tries to kill her. Morando then puts the footage in front of all of Akiridion-5. Unfortunately, Krel ends up fixing Mother, and Omen is switched off. Before that, Morando orders Loth to switch off the video, but the latter tells him that it is impossible. As this happens, Aja and Krel give a speech from Earth to Akiridion-5, inspiring hope against Morando. However, Omen switches back on, but is destroyed by Mother's gears. After that, Morando plans to come to Earth personally to end House Tarron.

Morando tries to send an armada to destroy Earth, but Krel made a video game which gets linked to the parking security drones to destroy Morando's fleet. When Go Go Sushi 2 gets revenge to be the most popular game, many parking drones were destroyed. Eli manages to destroy the fleet by its last hit. Morando then rages that they were defeated by parking drones. Following the defeat, Loth Soborian, who actually was working with the Resistance since the day Omen got defeated, tries to give the chip containing information that Gaylen's core is on Earth, but Morando arrests him when he tries to give the information to a member of the Resistance.

When Tronos gets captured by Colonel Kubritz, who said that he can have their remains after she kills them and not him, Morando then makes a hologram projection with her, saying that like her, he seeks to eliminate Aja and Krel.

Later, Gwendolyn contacts Morando about the royals being in Arcadia after pretending to be reformed. After the call, Morando makes an asteroid that is the size of Arcadia, and destroys it so he can lure the royals into a trap. Using this as a distraction, Morando arrives on Earth, where he meets Kubritz, who said that the asteroid nearly destroyed them, while Morando then makes a deal that he will give her the technology to wipe out extra-terrestrials off Earth.

Morando then meets Tronos in Area 49-B. Morando then asks Sergeant Costas guard to let him enter. He uses his charisma to kill Tronos for the guy's failure. Due to the wormhole, Luug and Aja teleport to the military station. There, she fights Morando. Luckily, Aja ends up making Luug fart and teleport back to the Mothership, much to Morando's disgust.

Morando then orders the Omens to go to the ship. Then Colonel Kubritz asks about giving her technology to protect Earth, and Morando then says that he will do it after they succeed. Morando then tries to enter the Mothership, and orders his Omens to disable the shields. Aja then called Buster to knock them off, but Morando ordered the Omens to kill Buster. When they enter, Morando orders his men to delete Mother. Apparently, she ends up being transferred to an Omen. Morando then duels in a fight with Varvatos. During the fight, Morando tries to taunt Vex using his family’s death. Vex ends up lashing out more when he says that he already knew Morando ordered the Zerons bomb Satellite-Nine to kill Vex’s family. Then, Morando ends up entering King Fialkov’s and Queen Coranda’s memory to find the location of Gaylen’s core. The Omen that was possessed by Mother ends up rescuing the royals inside, and tries to make sure they went inside the totality.

While then, Morando ends up in the memory where they were discussing if Aja and Krel were ready to rule. Then he tries to damage the memory. When Aja and Krel see that the memory of Vendel and Kanjigar is safe in Trollmarket, Morando attacks them and tries to kill them. Fortunately, the King and Queen attack him, and Morando is sent back to the real world. Now getting the info he needed, Morando tries to destroy the stasis chamber and the shields Mother enabled. Morando tries hard to disable the shields and destroyed the chamber. To repair it, Mother risks to reroute all power to the chamber, and in turn, deletes herself.

Back in Area 49-B, Morando gave Kubritz her suit to rid extra-terrestrial forces. Kubritz then said what her predecessor said about trolls and how it ends up being proven by showing the start of Morgana forming the Eternal Night. So Morando takes some Omens and try to enter Trollmarket. Whils the gang enters, Morando ends up being left outside. With reference to the footage, Morando makes a hole in the ground.

When Krel enters the Deep, Morando appears in a vision where he loses everything. Krel managed to outcome his fear and the vision. While then, Morando just entered the Hero’s Forge and tries to claim Gaylen’s core. When Krel and Aarrrgh! unlock the gate to Gaylen’s core, Morando tries to enter but it hey close it.

Despite being locked, Morando managed to entrer. As he climbed the crystal stacking, he duels with Aja. Morando ends up succeeding at getting Gaylen’s core, while the tower collapses to Vex, Toby, Krel, Aaarrrggghhh!, and Aja, but were protected by Varvatos's force shield.

After absorbing Gaylen’s core, Morando explains his plan to destroy the not just the galaxy, but the universe and reshape it in his image. Kubritz then threatens Costas due to what her deal with Morando was like that of the devil. By this act, Costas reformed and help Stuart build the exact same gun Seklos used to defeat Gaylen. While then, Morando ends up becoming a gigantic being and having the powers of a god. Now he heads to Arcadia after absorbing its powers. When Aja ends up making Kubritz see her mistakes, Kubritz tries to help them kill Morando, only to end up being crushed and killed in the inferno of an exploding car by Morando. Morando chases Aja and Krel to the bridge. When the gun was ready, Aja and Krel, was about to use their cores to kill Morando. King Fialkov and Queen Coranda recovered and used their cores instead. Vex tries to shield them, but Morando disables the shields and shot at Varvatos, which nearly killed them. Aja and Krel fire the gun at Morando, causing him to disintegrate to his death. With Morando dead, Aja, Varvatos, the Akiridions (except Krel), and Eli Pepperjack go to Akiridion-5, while Krel, Steve Palchuck, and Toby stay back on Earth.

General Morando is an alien with four eyes, three fingers on each hand, and blue skin, and he also appears to have two large horns on his head. His armor is a darker blue and has neon-blue highlights. He also has a transparent cape.

In his empowered form, he becomes a giant, the blue lights on his armor turn red, and his skin becomes dark, as well as his cape is replaced by Gaylen's wings. He has also two blasters on his each arms.

Cruel and abusive, Morando is by far a power-hungry dictator who wants nothing more than to destroy and dominate everything and everyone in his path, especially the royal Tarron family.

He doesn't really seem to care much about his henchmen, as he didn't even seem to be concerned that the bounty hunters he sent perished (minus Alpha), and decided to go after the Tarron's himself.

Morando is also very manipulative and persuasive, as he is the one who tricked Vex into helping him infiltrate the ceremony and take over Akiridion-5, since he ordered the Zeron Brotherhood to kill Vex's family.

By the time of Part Two, Morando became far worse than ever, as he sought to rule the galaxy by destroying all reality, then reshaping the universe in his image. 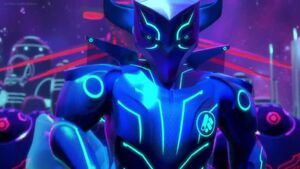 General Morando in his full uniform. 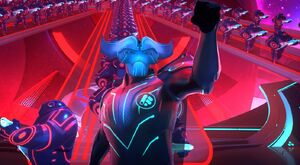 Morando as he invades Akiridion-5. 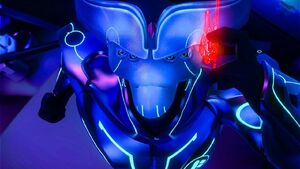 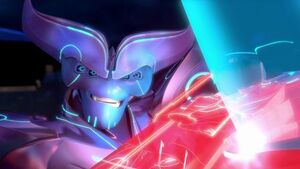