General in the U.S. military

Has knowledge on the U.S. military

Destroy the Cromulons with nukes (failed).


Kill Rick, Morty, and the President of the United States (failed).

General Nathan is one of the two main antagonists in the Rick & Morty episode "Get Schwifty", the other being the Cromulons. General Nathan is an American army general and works for the U.S. military.

He was voiced by Kurtwood Smith, who also played Clarence Boddicker in RoboCop, Thomas Perry in Dead Poets Society, Bill Patterson in The X-Files, Walt Disney in Robot Chicken and Gene in Regular Show.

At some point in his life, General Nathan would join in the United States military and eventually reach the rank of general. He would eventually accompany the President of the U.S.A. at the Pentagon to deal with the Cromulon threat and encounter Rick Sanchez and Morty Smith. He would later on betray the President when the situation was getting out of hand and would be killed by Rick when he attempted to kill the President near the end of the episode.

General Nathan makes his first appearance in the Pentagon debating how to deal with the Cromulon that has entered Earth's atmosphere. He suggests to the President, who is also present, that they should destroy it with nukes. When Rick and Morty enter the room via portal gun, Nathan gives his soldiers permission to shoot them but are killed by Rick's laser watch. After Rick tells everyone to use the giant speaker system at the sonic facility at Area 51, Nathan asks how he knows about that with the President saying that Rick can turn people into snakes (when he killed the guards upon entering the Pentagon) and that he can use Google Maps.

General Nathan is later seen at Area 51 asking the President what kind of song is "Get Schwify" (when Rick and Morty are performing their song in front of the Cromulon). Nathan is later shown outside a facility in Area 51 called Studio 51 where he tells the President that he has seen enough and that Rick, Morty, and Ice T are one hit wonders. The President then asks what kind of plan he has in mind. Nathan tells him they still have the nuclear option and on his word they can launch nukes at every Cromulon. The President then tells Nathan that their planet is held hostage on a live game show and that Nathan's solution is to shoot the audience, implying that is a terrible idea. The President says to Nathan that he can put his faith in nukes after they get through this situation. He then tells him until then, he will put his faith in Rick and Morty and that "Get Schwifty" was a jam.

After Ice T leaves the studio, Nathan gets fed up and has the President at gunpoint. After asking Nathan what he's doing, Nathan says that he's going to launch the nuclear option one minute into Earth's performance and mockingly tells the President that he hopes like getting hit in the face with a gun. Before the President can figure out what he means by that, Nathan knocks him out by hitting him in the face with his gun. Nathan then restrains and gags the President and leaves to continue his plan. Fortunately, Morty finds him after getting back to the studio with Rick's portal gun thanks to Bird Person. The President tries to reach Area 51 via intercom to call off the attack but Nathan jammed the transmission.

After Morty and the President arrives at Area 51 and meets up with Rick (who is trying to impress the Cromulons but to no avail), the President orders the personnel in the facility to call off the nuclear launch. Nathan tells one of the personnel to launch the missiles and then personally does it when the soldier doesn't comply. The missiles hit one of the Cromulons but does absolutely nothing with it saying "BOO! NOT COOL!". After Rick and Morty are able to save Earth and win the Cromulons show, Nathan appears and tries to kill Rick, Morty, and the President with an M-16 but Rick shoots him with his laser watch, killing him.

General Nathan is an arrogant, ruthless, impatient, and reckless individual who will do almost anything to carry out his objectives. Although at first he was compliant with the President's orders, he betrayed him when he believed that his plan was futile and carried out the nuclear option without the President's permission (even knocking him out and restraining him in an attempt to stop him from calling it off). Even after the Cromulons left and the Earth was saved, Nathan still tried to kill Rick, Morty, and the President due to his plan failing. He also did not prepare for Rick and subsequently was killed by him. 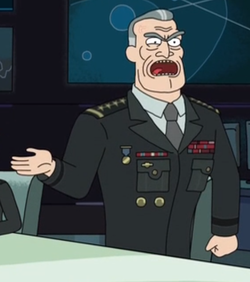 General Nathan talking to the President 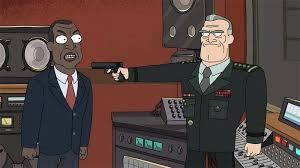 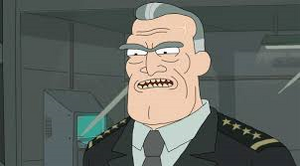