General of the Locust Horde

Leading the Horde.
Exterminating the humans.

Exterminate the Lambent and the humans.

High General RAAM (pronounced as "rahm", not "ram") is the main antagonist and final boss of Gears of War. The character would return in RAAM's Shadow as a major antagonist, and appear in multiple comic book issues.

He was voiced by Dee Bradley Baker, who also voiced Ra's al Ghul in Batman: Arkham City, Death in Dante's Inferno, Letz Shake in No More Heroes, and Gravemind in Halo 2 and Halo 3.

He is a Locust general directly (and indirectly) responsible for millions or, if anybody takes into account his high standing amongst the Locust Horde, perhaps billions of deaths. Once a Theron Guard, the cunning, diabolical, manipulative, and ambitious RAAM usurped the military leadership of the Locust Horde through skill and intellect.

He possessed great strength (possibly even greater than that of Boomers), able to wield a Troika machine gun by hand with ease. RAAM also wielded a serrated blade at times and is the only known Locust able to control the Kryll. He was able to prove his dominance over the Locust Horde (I.e., killing the original leader of Delta team, and able to survive many attacks from enemy soldiers).

RAAM was encountered on the Tyro Pillar, a cargo train, heading into a huge pit of Imulsion in Timgad Valley when he tried to prevent the Lightmass Bombing. It was here that the notorious Locust general met his demise at the hands of Marcus Fenix and Dominic Santiago, with the help of a King Raven helicopter commanded by Colonel Victor Hoffman and with turrets controlled by Damon Baird and Augustus Cole.

From Grub to General

RAAM only spent one year as a Drone and quickly proved himself in the elite Theron Guard. Truly cunning, ambitious, and manipulative, within only a few short years, he usurped the military leadership of the Locust Horde. It is unknown his role in the Human-Locust War, but he lead his troops personally during the Lightmass Offensive. His role during the battle was making sure Gears officers were killed and to make sure the "ground walkers" would not use their weapon of mass destruction. After killing Lt.Kim outside the tombs of unknown soldiers, he discovered the Human's plan to use the Lightmass bomb. Leading his forces to the train carrying the bomb, he had his men dump the Gears in front of the moving train.

After Delta-One boarded the train and killed every single Locust trooper they encountered, they engaged him in battle leading to him being killed in a hail of gun fire. His defeat lead to the destruction of the outer hollows and millions of his kinsmen dying, but also gave his people hope in the form of the Rift Worm.

In the Lightmass Offensive, RAAM was first seen when he led the ambush at the Tombs of the Unknown, where he personally killed the leader of the Delta Squad, Lieutenant Minh Young Kim. Following the retreat of Delta and Alpha Squad into the tomb itself, RAAM ordered the release of a Beserker into the tomb to kill the survivors. However, when that failed, he captured a Gear, and used his com device to discover the humans' whereabouts of the Lightmass Bomb, and it's need for targeting data.

He then shot the Gear in the head with a Boltok Pistol, and, acting on that intel, he sent forces to East Barricade Academy, where they attempted to prevent Delta Squad from obtaining Adam Fenix's targeting data, while he personally set out to hijack the Tyro Pillar with armed forces as well. While RAAM's forces in East Barricade failed to stop Delta Squad from obtaining targeting data, RAAM was able to take control of the Tyro Pillar. RAAM guarded the bomb while the Locusts attempted to drown it in the Imulsion without detonating it, but Marcus and Dom were able to jump aboard as it passed through Timgad Station.

Fighting their way to the front of the train, Dom and Marcus were able to clear the train of everyone but RAAM, who confronted them at the head of the train. RAAM held his ground guarding the bomb to prevent them from detonating it, using a Troika and shrouding himself in Kryll while attacking. Reavers also attacked, but a King Raven manned by Cole, Baird, and Hoffman prevented them from drastically interfering. Marcus and Dom were eventually able to kill RAAM, and they left his body on the Tyro Pillar as it drove into the Imulsion and launched the Lightmass Bombs into the Outer Hollows.

RAAM was a well-qualified and efficient general who rose through the ranks with ease and won Queen Myrrah's favor. He is seen executing a captured COG soldier with that soldier's own pistol after using the soldier's radio to listen in on his enemies' plans. Even after Sgt. Fenix and Dom cleared out Tyro Pillar of all other Locust presence, he stood his ground and tried to hold off Delta-One until his death.

RAAM is a silent, but ruthless Locust. His plan to win the war through attrition, and was judicious, methodical, questioning, ratiocinative, straightforward, commonsensical, conceivable, omniscient, strenuous, and calculated, focusing his attention on exterminating the humans with the most power. Myrrah described RAAM's plan the best, as an attempt to cut of the head of the snake to kill the body. Unlike his successor, Skorge, RAAM moved at a slow, but still juggernaut force, with no intention of stopping with anything less than total annihilation of the human race.

His failure seemed to spell certain doom for the Locust Horde. With the obstreperous destruction of the Outer Hollows, and the loss of millions of grubs, and most likely turning the tide of the Locust Civil War to the Lambent's favor. But the Lightmass Bomb awoke the Riftworm, and his successor Skorge was able to use the awakened Rift Worm and lead the counterattack against Jacinto City. 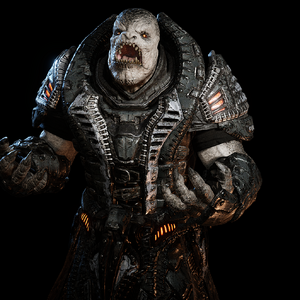 RAAM when he was a Vold (Lieutenant). 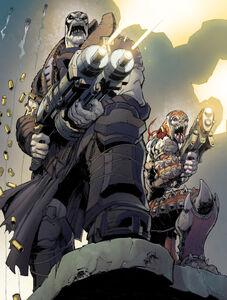 General RAAM with Skorge in the comics. 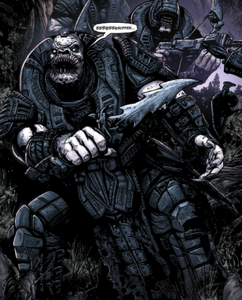 General RAAM in the comics. 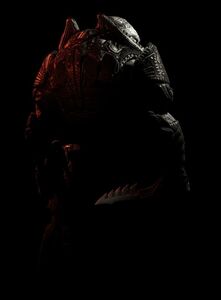 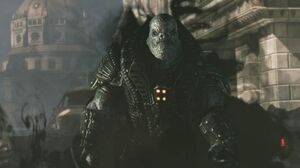 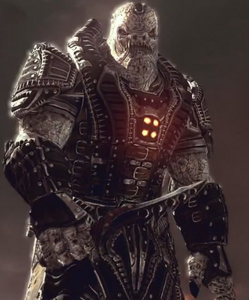 General RAAM in Gears of War. 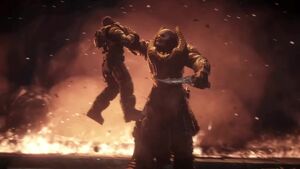 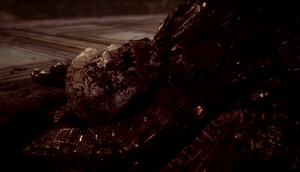 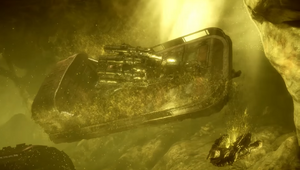 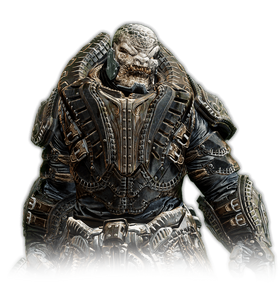 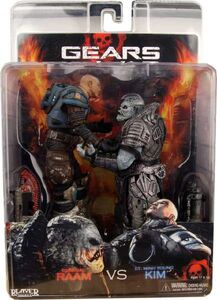 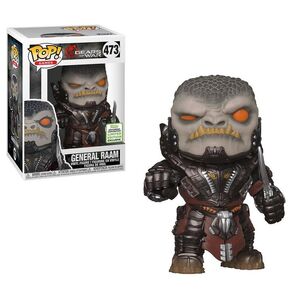 General RAAM's funko pop.
Add a photo to this gallery

Retrieved from "https://villains.fandom.com/wiki/General_RAAM?oldid=3702807"
Community content is available under CC-BY-SA unless otherwise noted.