Leader of the SharpClaw

Conquer all of the planet Sauria.

General Scales is the central antagonist of the science fantasy video game Star Fox Adventures. He is the ruthless leader of the SharpClaw tribe.

He was voiced by John Silke.

General Scales is the leader of the evil SharpClaw tribe. After being denied a position of power due to his greed, he repeatedly tried to take over Sauria, which at the time was called Dinosaur Planet, but the other dinosaurs were able to stop his attacks, until one day, in his quest for power, ﻿he unwittingly came across the disembodied spirit of Andross, though he was unaware of who or exactly what he was. All that he knew was that he gained greater power. He removed the Spell Stones from the center of Sauria to break the planet apart.

Krystal attempted to stop him, but he threw her over the edge of his battleship, the Galleon, saying he wanted to control the planet with fear. A CloudRunner saved Krystal from falling to her death, but she was later trapped in a crystal by Andross, who only gave General Scales power so he would take over Dinosaur Planet and, by doing so, ensure Krystal's arrival, as he planned to use her power to control the Krazoa Spirits and revive himself. General Scales was unaware of this, only wanting to rule Dinosaur Planet himself.

Fox McCloud arrived, released four Krazoa Spirits (Krystal earlier released one as well, leaving only the sixth) and brought the spell stones back to the center of Sauria. After Fox released the fifth Krazoa spirit, he entered the sixth and final Krazoa shrine. Instead of a challenge and a Krazoa spirit room, Fox found a battle arena, where he came face to face with General Scales. Before they could fight, however, Andross revealed himself to Scales and forced him to give Fox the final Krazoa Spirit. Then, for unknown reasons (presumably due to the power Andross may have used to force Scales to give up the spirit, or else as a result of him having a Krazoa spirit inside him while not pure of heart), he fell to the ground presumably dead. Three SharpClaws took his belt and began celebrating, his influence over them diminished. Soon later Andross was slain and General Scale's old minions redeemed.

General Scales is a kind of hybrid: half-Tyrannosaurus, half-Raptor, his skin is green, he walks in two feet, he possesses a double hook and a 3-fingered hand, he uses a horned hat and armor. He is about 2.23 meters tall making him the tallest character with human height in the series currently and is very strong.

General Scales at the very beginning of the game seems very evil and dark, doesn't care about anything that other creatures need and think he can take everything he wants, however in his form of thinking he is an animal Dark Lord that rules Sauria. He is very bad-tempered and a schemer. He is competent enough to gain temporary success in many of his plans, but his success is always short-lived thanks to Fox. General Scales is shown to be very fierce, ruthless, sadistic, evil and cruel. He does not doubt himself and is always confident in his plans, and appears to enjoy mocking his victims. He is also shown to have an ego, believing that only he is worthy to rule Sauria and showing an arrogant sense of entitlement. Scales also appears to be very cunning and prefers to control Sauria with fear. He is even shown to be cruel to his own tribe, as shown in CloudRunner Fortress when he smacks three SharpClaws aside and later uses one as a shield against Fox.

He is also shown to exhibit an extremely power-hungry personality, to the point of not questioning where or who he got his power from when he received it from Andross. Andross describes this by saying "Your desire for power overwhelmed you and blinded you to the truth inside". Before receiving this power he has always been trying to take over Sauria.

General Scales possesses huge physical strength, great swordsmanship, fierce fighting skills, a very strong tail attack, and earth-based combat. He can also absorb the Krazoa Spirits, given him awesome magic. Scales also has a belt that he can use to vanish, helping in his escape. His introduction before his would-be "boss fight" could imply him to be able to climb up walls. 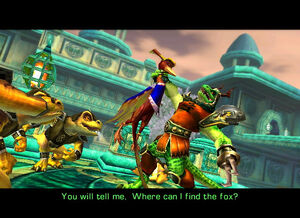 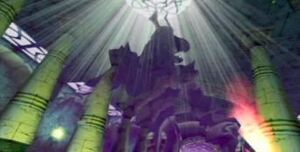 The ghostly imitation of General Scales during the Test of Fear.

Scales draws his sword, about to fight Fox. 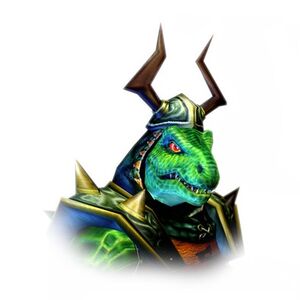 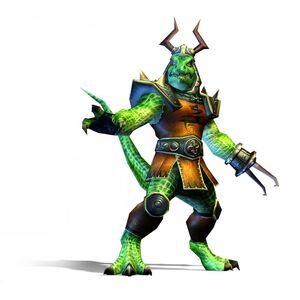 General Scales chokes Krystal as she tries to warn him about a distress signal.
Add a photo to this gallery 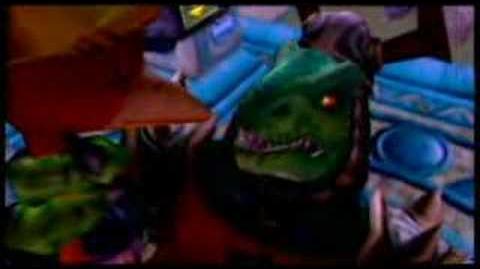 General Scales Confrontation
Add a photo to this gallery

Retrieved from "https://villains.fandom.com/wiki/General_Scales?oldid=3950304"
Community content is available under CC-BY-SA unless otherwise noted.