Destroy every alien planet in the galaxy.

Avenge his father's death.
Kill Gary and his family (all failed).

General Shanker is the main antagonist of the 2013 computer-animated film Escape from Planet Earth.

He is the tyrannical head of Area 51 who is bent on eradicating all intelligent life from the galaxy. He is in an alliance with Lena Thackleman, an extraterrestrial whom he has tricked into sending him Blubonium, which can power his weapons to destroy every alien planet in the Solar System.

He was voiced by William Shatner, who also played James T. Kirk's evil doppelgänger in Star Trek, Mayor Phlegmming in Osmosis Jones, Cyrax in Insaniquarium, Kazar in The Wild and Two-Face in Batman vs. Two-Face. As a child, he was voiced by Joshua Rush (who also voiced Jeremy Birnbaum) .

Early Life and Growing Up

Shanker is seen in a flashback when he was a young boy and his father and him were stargazing when a flying saucer comes crashing down to Earth. It kills Shanker's father and causes him to scream in rage.

After an unknown period of years, Shanker enrolls in the army and eventually becomes a general. He gained control of Area 51 and lured countless aliens to his base and then forced them to create technology such as the Internet and iPods and then run makes deals with Steve Jobs and Apple.

Eventually, over a universal dating website, he becomes engaged to Lena Thackleman and strikes a deal with her. If she provides him with enough Blubonium, the two will rule the galaxy together.

Welcome to Earth and Alien Prisoner

Shanker sends a decoy distress signal from Earth and it's received by Planet Baab and so they send their hometown hero Scorch Supernova. When Scorch lands on the planet with a camera, the first thing he sees is a 7-Eleven and lays eyes on a balloon-man and this serves as a distraction. Shanker's men ambush the alien and although he is able to fight them off, Scorch is quickly surrounded and Shanker is able to hit him from behind with a dart gun. Shanker holds the unconscious alien close to him and tauntingly says "welcome to Earth." The soldiers then drag Scorch's body to an ice cream truck before Shanker destroys the camera, severing all connections between the Dark Planet and Baab.

However, Scorch is still alive, as Shanker and his men imprisoned him inside Area 51. while he is left strapped to a table, three aliens who possess telekinesis (the same ones who killed Shanker's father) are removing his suit.

Shanked orders his men to open the suit and this reveals a secret compartment which contains a Blubonium reactor (which is apparently 10,000 times more powerful than atomic energy) that was given to him by Lena. Scorch wakes to see this and demands to be released only to be knocked out once again.

However, word of Scorch's capture reached Planet Baab and his brother, Gary, went to Earth to rescue him. However, his ship ended up destroyed and leaving him marooned near the same 7-Eleven where Scorch was abducted but Shanker's men were waiting and end up kidnapping Gary as well.

They take him to Area 51 and after a brief intelligence test, the soldiers send Gary to Shanker's office. He reveals that he has Scorch's suit on display, claiming that he knew about his work. Shanker then makes a deal with him: Gary does everything Shanker says and helps build modern technology that Shanker passes off as human and in return he releases the aliens. Shanker then straps an electric shock collar so he can control his prisoners and sends him down to the cells where Gary meets other captives such as Io, Doc and Thurman.

Shanker then gets a message from his fiancé, Lena. He then makes his office more romantic using candles and hides his baldness with a wig. Lena asks if he received the present meaning the Blubonium reactor only for him to reply it wasn't as much as he was hoping for, only for Lena to assure him that there will be more coming and with that power they will rule the galaxy together. However, she is unaware of Shanker's true plot to wipe out the alien race from the Milky Way.

Shanker doesn't appear again until later when he was seen breaking up a food fight led by Gary and Scorch. He uses the shock collars to detain them and then reveals his super weapon to the aliens.

Shanker reveals to Io, Gary, Scorch, Thurman and Doc his master plan - he used the technology the imprisoned aliens created to build a super weapon called the Peace Shield which is powered by the Blubonium reactor that was smuggled inside of Scorch's suit. It has the capability to destroy an entire planet and to test the weapon, Shanker destroys Haley's Comet.

Realizing the destruction the Peace Shield can cause, Scorch is able to cause a commotion which leads to the reactor being destroyed. Gary and Scorch are detained by the three grey aliens' telekinesis. Shanker threatens Io, Doc and Thurman that if they can't repair the Blubonium reactor they will never return home.

Shanker reveals to Gary and Scorch his dirty little secret, whatever aliens he captured over the years he has never actually freed; instead, he put them in cryogenic stasis and kept them as his own personal collection. Shanker freezes Scorch and, wanting to help his brother, Gary strikes a deal with Shanker that if he rebuilds the Blubonium reactor Scorch will be freed. Before leaving, Shanker threatens to freeze Gary and the rest of the aliens if he tells anyone else about his freezer.

With help from Io, Thurman and Doc the reactor is fixed and Gary prepares to get his brother back.

The Truth Revealed and Our First Target…

Gary marches to Shanker's office and demands that Scorch be freed only for Shanker to go back on their deal and reveal the large amount of Blubonium heading to Earth. He then proceeds to shock Gary out of entertainment and then reveals his plan to hunt every single alien down. Gary protests that aliens come in peace only for him to respond that no aliens come in peace and reveal his tragic past.

Before sending Gary to join his captive brother, Shanker reveals his engagement with Lena and discovers that the alien has captured his wife and son. Gary tries to explain that Shanker is using her but is silenced when Shanker shocks him. In reality, Shanker doesn't care about Lena at all and is just using her for the Blubonium and the second she leaves Baab, he will simply destroy her along with the rest of the alien infestation. Gary is sent to the freezer and frozen next to Scorch.

Shanker returns to the Peace Shield where Io, Thurman and Doc are awaiting. He picks his first target, Planet Baab, and when Doc asks when they will be returned home, Shanker responds by keeping him in line by using the shock collar. Io is enraged and attempts to attack Shanker, only to be shocked yet again.

Shanker fires the Peace Shield, but nothing happens and he lays eyes upon a folded piece of paper in the mechanism when he opens it. It is revealed to be a picture of Gary's family underneath a crude drawing of an alien and the words "we come in peace." Removing this picture was actually a trap, it causes the Blubonium reactor to overload and it destroys the Peace Shield while simultaneously removing the shock collars and freeing the frozen aliens.

When Io, Thurman, Doc, Gary and Scorch are heading towards an elevator, the soldier attempts to stall the elevators only for Shanker to stop him as they are sitting ducks and sends his soldiers with freeze rays to recapture them.

Lena attempts to contact Shanker only for him to reply that he is very busy. The commotion causes him to forget his wig and reveal his baldness to her; however, he dismisses this as "those blue idiots" ruined his plans and threatens to end their relationship if she ruins his Blubonium delivery.

The aliens escape Area 51 and use Scorch's ship to leave Earth however they are ambushed by Shanker's men in jets; however, Gary (with the help of his son Kip) is able to dodge the assailants.

However, before they are able to leave, Shanker ambushes the aliens using Scorch's suit he traps them in a tractor beam. After an airborne battle, Gary and Scorch overpower Shanker and rip out the core. The suit is then destroyed and Shanker, Gary and Scorch seemingly fall to their deaths.

However, the three grey aliens are able to rescue the three with their telekinesis, and reveal that they can speak (in British accents). They also shed light that they only worked with Shanker as they felt bad about killing his father only for them to discover he was a psychopathic megalomaniac bent on destroying all intelligent life in the known universe. Shanker awakens and vows to make Gary pay only for him to be knocked out cold by Gary. Shanker's fate remains unknown, but he was most likely taken by the aliens who killed his father.

Shanker is a cold-hearted and unsympathetic army general. He is very paranoid and openly despises any form of intelligent life whether it's peaceful or otherwise. After aliens accidentally murdered his father as a young boy, it transformed Shanker into a homicidal madman. Because of this, he believes that aliens are Earth's biggest threat and forced aliens he captured to invent technology that he passes off as his own (such as the iPhone or the Internet) before attempting to build a weapon that would destroy every alien-inhabited planet in the galaxy.

He was also shown to be a talented, superlative, resourceful and consummate liar, as he is able to convince abducted aliens that he would have released them if they did what he asked when he could have just frozen and then added them to his collection; for instance, Shanker was able to convince Lena (who was his fiancé) that he loved her when in reality all he wanted was the Blubonium. He appeared to be lacking in charisma; instead of other generals, Shanker would instead bargain with people for his advantage and wired aliens with shock collars to keep them in line. After losing all patience with her, Shanker threatened to end the relationship with Lena if she ruined his delivery. Despite his outward hatred of aliens, he would work with one for his own advantage. 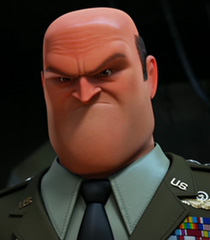 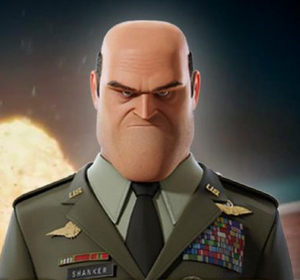 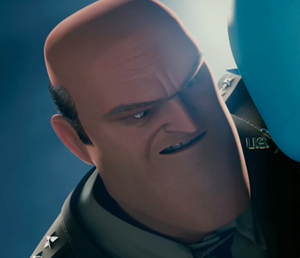