Leader of the Devotindos Empire

General Sweinhart is the main antagonist of the 2010 sci-fi fantasy videogame reboot Rocket Knight. He is the new leader of the Devotindos Empire following Devligus Devotindos' destruction. Initially appearing as an ally to the protagonist, Sweinhart is eventually revealed to be the villain.

During the time when Sparkster was fighting the Gedol Empire, Sweinhart gathered a diplomatic caravan and approached the King of Zephyrus, proposing a truce. In exchange for Zephyrus's resources and sheltering the Empire would offer their technology and labor force. The King accepts the deal, and so the two countries become allies. When Sparkster returns, he attempts to convince the King to not trust the pigs, but the King keeps with his promise, as the mere presence of the pigs was keeping all other warring countries at bay. Distrustful, Sparkster decides to leave Zephyrus and retire from his job as a Rocket Knight.

Fifteen years later the Wolf Army stages an invasion on Zephyrus. Sparkster, who had been living as a farmer and formed a family, once again dons his Rocket Knight gear and travels to Zephyrus to defend them from the invasion, while Sweinhart leads the combined forces of the Big Army and the Zephyrians. Sparkester confronts Ulfgar the Merciless, the Wolf king, and defeats him in battle, but upon his surrendering Sweinhart turns on against them, revealing his plans to conquer Zephyrus using a gigantic robot he had been building this whole time. After destroying the Devotindos' secret factory where they had been building weapons, Sparkster returns to Zephyrus and confronts Sweinhart, defeating his giant robot and knocking the general to his apparent demise. 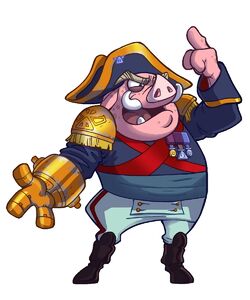 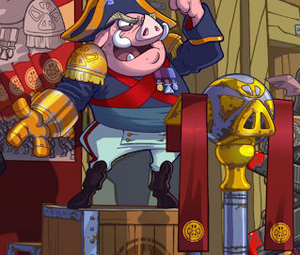 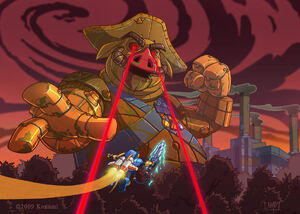 Sweinhart's Pig Emperor robot
Add a photo to this gallery
Retrieved from "https://villains.fandom.com/wiki/General_Sweinhart?oldid=4141228"
Community content is available under CC-BY-SA unless otherwise noted.