Hire the Brothers Grimm to solve a mystery concerning missing girls from a village.

Kill the Brothers Grimm after they fail to solve the case.

General Vavarin Delatombe is one of two main antagonists in the 2005 fantasy film The Brothers Grimm, alongside the Mirror Queen.

He was portrayed by Jonathan Pryce, who also portrays Elliot Carver, the High Sparrow, and Seamus O'Rourke.

Delatombe is a ruthless French military commander who hires Will and Jake Grimm (better known as the Brothers Grimm) to solve a mystery concerning a number of girls who have disappeared from a village. The Grimms investigate and soon discover that the girls have been taken by a supernatural force in the form of the Mirror Queen, a 500-year-old Thuringian queen who wishes to use these girls to restore her own beauty. When another girl is taken from the village, the Grimms are taken back to Delatombe who orders for them to be killed due to their failure. However, they manage to convince Delatombe that the magic in the forest where the Mirror Queen resides has been caused by German rebels, and the general sends them back to continue their investigation.

Later on, after the Grimms reach the Mirror Queen's tower, Delatombe and his soldiers arrive and Delatombe condemns the Grimms as frauds. He then has the forest burnt down with the Grimms still in it, but they manage to escape after the Mirror Queen creates an icy wind to extinguish the fire. Realizing the Grimms have escaped, Delatombe pursues them into the forest and orders his associate Cavaldi to kill them. Cavaldi refuses, having worked alongside the Grimms throughout the majority of their adventure, and is subsequently shot by Delatombe. Will then battles Delatombe and kills him by stabbing him through the chest with a flagpole. 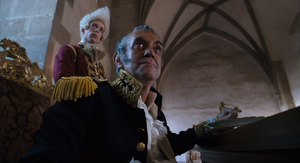 Delatombe during his first meeting with the Brothers Grimm 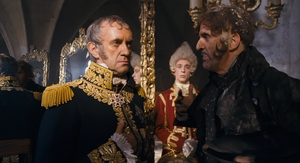 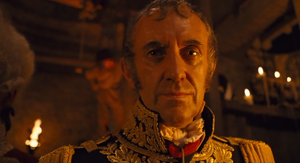 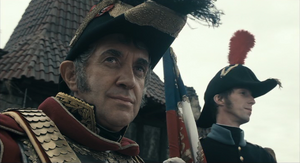 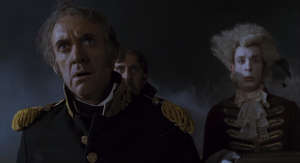 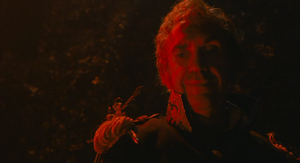 Delatombe telling Will Grimm to beg for his life 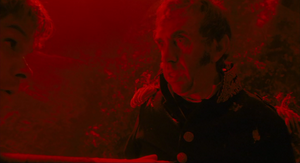 Delatombe being stabbed through the chest with a flagpole
Add a photo to this gallery
Retrieved from "https://villains.fandom.com/wiki/General_Vavarin_Delatombe?oldid=4072206"
Community content is available under CC-BY-SA unless otherwise noted.