General in the US military

Misuse both Plastique and Firestorm for military purposes.

General Wade Eiling is the head of meta human operations in Central City and a former partner of "Harrison Wells", whom he now despises for creating the meta-human species. He is a supporting antagonist of Season 1 in The Flash TV series up until he was seemingly killed by Grodd.

However, he makes a final appearance in the episode Grodd Lives, where it is revealed that he became a puppet for Grodd who turned him into a supervillain whom Joe named Goldfinger.

Wade Eiling previously had intentions on doing experiments on Grodd the gorilla, intending to create mind reading abilities for interrogation purposes. Harrison Wells shut down the experiment before they could begin to save Grodd from Eiling's cruel experiments.

Experimenting on and hunting Plastique

After the S.T.A.R. Labs particle accelerator accident which granted Bette Sans Souci the power of turning ordinary objects into explosives, Wade begun experimenting on her, hoping to use her as a weapon in war. However, Bette escaped from him.

After Bette causes an explosion in an office building, the Central City Police Department begins investigations. To cover up Bette's powers and his participation, Eiling heads to the Police Department. There, he tells Detective Joe West that the military is going to take over the investigation and confiscates every intel Joe has on Bette. However, Barry uses his speed to steal back a file from Eiling to continue his investigation.

Eiling tracks Bette down when she is confronting the doctor who experimented on her on Eiling's orders. While Bette talks to the man, Eiling rounds up his men outside the building. He then orders one soldier to open fire and the soldier shoots Bette in the shoulder. Eiling then sends his men into the building to take Bette into custody. However, Bette is saved by the Flash and brought to Star Labs, where "Harrison Wells" informs her on her condition. However, the bullet in Bette's shoulder contains a tracker which leads Eiling to Star Labs. While Barry, Cisco and Caitlin bring Bette to safety, "Wells" talks to Eiling, who has his men search the facility for Bette. Eventually, Eiling is forced to leave. Before he goes, he tells "Wells" that they could've changed the world together.

After returning to Star Labs, Bette talks to "Wells", who tells her that they cannot change her condition. Wells talks her into killing Eiling, as Eiling is an evil and cruel man who deserves death. Bette takes this task as her last duty as a soldier and heads to the Central City Water Front, where she waits for Eiling and his soldiers to arrive. When they arrive, Bette supposedly surrenders herself but Eiling does not believe her. When the General and his men advance on Bette, she throws some of her bombs at them, knocking them all to the ground. Bette then turns to Eiling, intending to kill him, but is stopped by Barry who convinces her to spare Eiling's life. While he does so, Eiling draws a pistol and shoots Bette dead. Her DNA turns the bullet into a bomb, forcing Barry to carry her body onto the river to prevent the city from being destroyed by the impact. While interviewed by reporters, Eiling later claims that the military were only testing explosives and that the city shouldn't be alarmed.

Eiling later returns alone to S.T.A.R. Labs to confront "Wells" about Barry. Seeing the potential in metahumans, he suggests that they work together again, which "Wells" refuses immediately. Eiling threatened to bring his soldiers in to take over the building, but Wells counters that he could bring an army of press as well and he could testify against Eiling for his unethical projects. He warns Wade not to threaten him again, or he would end him, and not just his career. Turning to leave, Wade reminds "Harrison" that he knows his secret and the public will figure it out as well.

Some months later, Eiling detects a nuclear explosion in the badlands outside Central City, correctly guessing that Firestorm is involved. He sends some soldiers there to retrieve Firestorm but they find nothing in the crater except imprints of two bodies. From this Eiling deduces that Firestorm has been separated. Eilings soldiers follow Ronnie Raymond, one half of Firestorm, to a café and try to apprehend him. Ronnie manages to flee outside where he is cornered by Eiling himself.

The Flash arrives and takes out Eiling's soldiers but Eiling draws and throws a grenade which releases spikes drawn to kinetic energy, claiming that he had it designed especially for Barry. The nails pierce into Barry, immobilizing him through the pain. Eiling claims that Firestorm was the main objective of the operation but that capturing the Flash is a nice bonus. Barry's team arrives in a car and the distraction allows Ronnie to hit Eiling in the face and escape into the car with Barry. After getting back up, Eiling tells his soldiers that they are at war.

Wells later visits Eiling at his military headquarter. Eiling greets Wells by asking him whether they are still pulling needles out of Barry Allen's body, revealing that he knows Barry's identity. Wells reveals to Eiling that he doesn't know how Firestorm works. Eiling replies that Wells at least know who the two sides of Firestorm are and that they could lead the US military into a new era. He says that Wells knows where to find him if he's come to the right decision. Wells then leaves the premises. Wells later spikes the drink of Dr. Martin Stein, the other half of Firestorm, and hands him over to Eiling, claiming that Stein holds the secret to Firestorm. When telling the team, Wells claims that Eiling invaded and took Stein by force.

Eiling then brings Stein to a secret military facility where he tells Stein about his vision - soldiers equipped with the powers of Firestorm. Stein claims that he would be happily die before seeing that happen. Eiling tells him that Stein will die no matter what outcome, but how fast he dies will depend on his cooperation. Eiling then has two of his men torture Stein, but Stein yields up no information. Watching the torture, Eiling claims that the last time he did that it was to a gorilla. Through Ronnie, the team finds out that Stein is held captive at military base 27. Barry and Ronnie travel there to save Stein.

When a scientist tells Stein that they have been able to extract the Firestorm matrix from Stein's cells, Eiling returns to Stein, intending to shoot him in the head. However, Barry enters the facility and grabs Stein before Eiling can pull the trigger. Upon seeing that Stein is gone, Eiling realizes that the Flash is nearby. Eventually, Barry separates from Ronnie and Stein. The latter two are followed by Eiling and his men and fuse to Firestorm again to save themselves. With Firestorm's power, they defeat Eiling's men before facing the general himself. However, Eiling uses another grenade to bombard Firestorm's cellular structure with enough ions to destabilize their matrix. As Firestorm lies on the ground, Eiling draws his gun, claiming that Ronnie and Stein were great Americans and that their country thanked them for their sacrifice. However, he is once again stopped before he can shoot; the Flash arrives and hurls him to the ground. Firestorm and the Flash then escape from the base, leaving an unconscious Eiling behind.

The next night, Eiling is from his base by "Harrison Wells", who reveals himself as the Reverse-Flash. "Wells" brings Eiling into the sewers and tells him he is a metahuman, and therefore, that he "looks out" for other metahumans, Wells then releases Grodd on him, and a screaming Eiling is dragged into the dark by the gorilla he once captured.

It's late revealed that instead of being killed by Grodd, Eiling was brainwashed by Grodd through his mind control powers and turned into a supervillain that Joe named Goldfinger. As Goldfinger, Eiling attacks the Central City Gold Reserve, killing many security guards. When the Flash arrives and advances onto him, Grodd uses his power to torture Barry telepathically. While Barry falls to the ground, Goldfinger seems also to be affected but straightens back up and escapes.

Expecting for Goldfinger to attack a gold transport, Joe West and a few SWAT members volunteer to guard the transport. The truck is indeed attacked until Joe shoots Goldfinger in the shoulder. Barry arrives, smashing into Goldfinger and throwing him into the truck. Taking off the villains mask, both men are surprised to look into the face of Eiling. They bring him into the Pipeline and Team Flash tries to talk to Eiling. Though initially absent minded, Grodd eventually responds, revealing that he took over Eiling. Grodd also reveals that Eiling hurt him and that he is therefore now hurting Eiling.

After the team defeats the telepathic gorilla, Eiling is freed from his mind control and is released from the Pipeline, heading back to his military base and beginning to hunt down Grodd.

Wade Eiling is shown to be a ruthless man. He will do anything, including inhumane activities to strengthen the US military, even experimenting inhumanely on an animal and even humans, even going as far as to execute them once he was done with them. He does seem to have some respect for "Harrison Wells", even calling him the smartest guy that he knows. 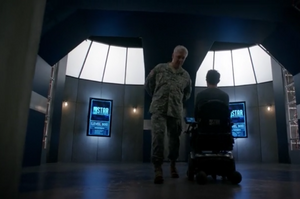 Eiling with Wells at Star Labs 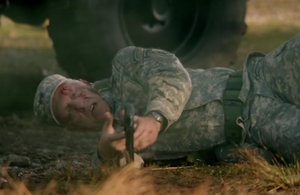 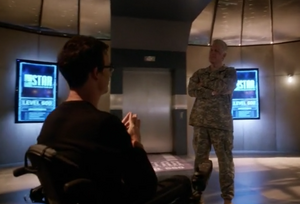 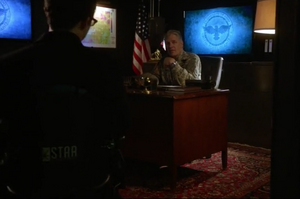 Eiling is visited by Wells at his office 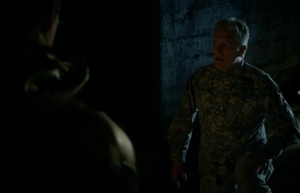 Wells brings Eiling into the sewers 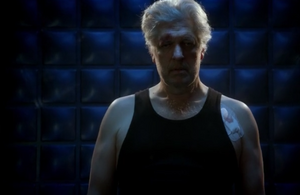