Expertise in fields of biology, robotics and AI
Access to advanced technology and super weapons
Vast material resources
Control over the German Military
Political power and contacts across the Third Reich

Destroy the city Isenstadt with his super weapon.
Kill Agent/Major Blazkowicz.
Conquer the world and build a new order in the name of Nazism and himself.

Dr. Obergruppenführer (General) Wilhelm Strasse, also known as "Totenkopf" or "Deathshead" due to his skull-like visage, is the overall main antagonist of the Wolfenstein series and the archenemy of William J. Blazkowicz.

Deathshead is a high-ranking and leading member of the German Armed Forces/Wehrmacht as well as the head of the SS Special Projects Division. Furthermore, he's a gifted but twisted scientist whose war machines ensured the victory of the Third Reich against the Allied Forces.

He was voiced by Robin Atkin Downes in the 2009 Wolfenstein and Dwight Schultz in Wolfenstein: The New Order.

In Return to Castle Wolfenstein, Deathshead is the creator of the Proto Soldiers, their failed prototypes, the Lopers, and his greatest creation, Das Ubersoldat. He is ordered by Heinrich Himmler to create these abominations for use in Operation: Resurrection, a plan to bring the German warlord Heinrich I back from the grave. Despite this, he has no belief in the occult, wishing instead his creations be used as direct weapons of war. Protagonist Agent BJ Blaskowicz discovers the X-Labs where Deathshead conducts his experiments. After cornering Deathshead, he releases Das Ubersoldat to fight Blazkowicz. Das Ubersoldat is destroyed, but Deathshead escapes in a rocket plane and is never heard from again for the rest of the game.

After Agent Blazkowicz kills General Viktor Zetta in Wolfenstein, Deathshead is called in to replace him, resuming his research into Veil technology to make new, advanced weaponry for the Nazis. He, along with bodyguard Hans Grosse, capture and later kill Kreisau Circle leader Caroline Becker. Later, BJ follows him to his zeppelin and through a Veil portal, where Deathshead leaves him to be killed by Grosse, now fitted with power armor. Blazcowicz kills Grosse, destroys the Veil weapon Deathshead was working on, and escapes, leaving Deathshead to seemingly perish in the now crashing zeppelin. However, it is revealed at the end of the game that Deathshead survived the crash, cursing Agent Blazkowicz for ruining his plans.

Deathshead is the main antagonist of Wolfenstein: The New Order. In the game, he is responsible for having the Third Reich win the second world war due to his advanced technology and vast amounts of resources that he has given to the Nazi regime. Around July 16, 1946, the Allies launch a desperate offensive to take him out only to have the entire assault force get wiped out and the Axis winning World War ll. 14 years later the Nazis have conquered the world and Europe is now the Nazi mainland with the Soviet Union completely collapsed and surrender of the United States making Germany the top power of the world. In the game, Deathshead captures Blazkowicz and his group while they infiltrate his base and forces Blazkowicz to chose whether he will experiment on either Private Wyatt or Fergus Reid, killing the other one after the choice is made. Years later, in 1960, he uses a mental institution in Poland for experiments on the mentally ill. After BJ Blazkowicz wakes up and escapes the asylum with Anya, he soon discovers the horrifying truth of the new Nazi rule the world. In the game's finale, Deathshead first pitches Blazkowicz against a robot fueled by the brain of the man Blazkowicz chose for experiments at the beginning. After the robot is defeated, Deathshead uses the Armored Robot Suit to face B.J but he is beaten. After crawling out of the armor, Deathshead is stabbed repeatedly by Blazkowicz. In his last moments, Deathshead grabs Blazkowicz's arm and detonates a grenade to kill himself and maul B.J in the explosion. 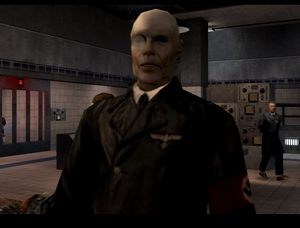 Deathshead in Return to Castle Wolfenstein. 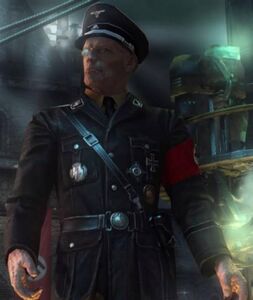 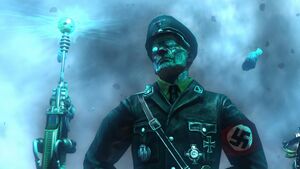 Deathshead in the Black Sun Dimension. 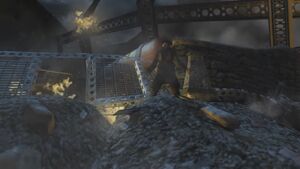 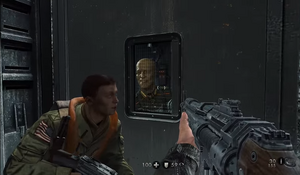 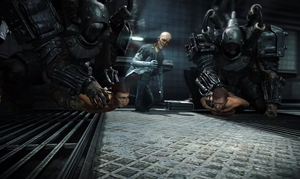 Deathshead showing the brain of one of Blazkowicz's companions who was forced to be killed earlier.

Deathshead in his robot suit.

Deathshead about to be stabbed by Blazkowicz. 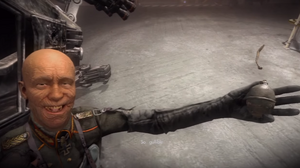 Deathshead using a grenade to kill himself with Blazkowicz nearby.

Deathshead's bloody remains.
Add a photo to this gallery

Retrieved from "https://villains.fandom.com/wiki/General_Wilhelm_Strasse?oldid=4170288"
Community content is available under CC-BY-SA unless otherwise noted.