General
The Dark One
The One-Eye Evil

Keep a grip on Efrafa

Reclaim the Efrafan refugees
Get revenge on Bigwig.

General Woundwort (simply known as Woundwort) is the main antagonist of the 1972 book, Watership Down, its 1978 animated film adaptation, and its 1999-2001 TV series. He is a savage and powerful rabbit who is the oppressive dictator of the warren Efrafa.

As a young kitten, Woundwort was orphaned when a human shot his father and his mother was killed by a weasel, but he himself was rescued by an old man, who took him home and raised him. As Woundwort grew older, he becomes extremely aggressive, and eventually escaped, and in the process he almost killed the old man's cat, severely maiming it. He arrived at a warren, killed its leader, and took over. He went to some neighboring warrens and killed their leaders personally. Thus, Efrafa was born, and for several years, he reigned supreme. Until the Watership Down rabbits appeared on the scene.

Watership Down backstory up to Efrafa

In the Sandleford warren, Fiver, a young runt rabbit who is a seer, receives a frightening vision of his warren's imminent eradication. When he and his brother Hazel fail to convince their chief rabbit of the need to evacuate, they set out on their own with a diminutive band of rabbits to probe for a new home, scarcely eluding the Owsla, the warren's military caste.

The travelling group of rabbits find themselves following the leadership of Hazel, previously a nugatory member of the warren. They travel through dangerous territory, with Bigwig (also known as Thlayil) and Silver, both former Owsla, as the only significantly strong and vigorous rabbits among them.

Fiver's visions promise a safe place in which to settle, and the group eventually find Watership Down, an ideal location to establish their new warren. They are soon reunited with Holly and Bluebell, additionally from the Sandleford Warren, who reveal that Fiver's vision was true and the entire warren was eradicated by humans.

Although Watership Down is a placid habitat, Hazel realizes there are no does, so making the future of their new home dubious. With the help of a seagull designated Kehaar, they locate a nearby warren, Efrafa, which is overcrowded and has many does. Hazel sends a small emissary to Efrafa to present their request for does. While waiting for the group to return, Hazel and Pipkin prosperously raid the nearby Nuthanger Farm to rescue a group of hutch rabbits there, returning with two does. When the emissary returns, Hazel and his rabbits learn Efrafa is a police state led by the despotic General Woundwort; Hazel's rabbits marginally return alive. However, the group does manage to identify an Efrafan doe named Hyzenthlay who wants to leave the warren and can recruit other does to join. Hazel and Bigwig devise an orchestration to rescue the group of rabbits from Efrafa to join them on Watership Down.

Bigwig and Hazel, along with help from Kehaar and a genius rabbit named Blackberry, devise a plan to liberate some does from the police state warren of Efrafa. Bigwig is sent to Efrafa, and Woundwort immediately promotes him to the Owsla's (military caste) ranks for his strength and rugged fighter's appearance. He then manages to contact several does and a maimed rabbit named Blackavar and tells him his plan to escape Efrafa.

On the day they are supposed to escape, one of the does is captured by the Owsla, and betrays Bigwig's plans to Woundwort as Bigwig jumps one of the Owsla and gathers the does and Blackavar. They are chased by Woundwort and his henchmen to a river, where a boat is docked and the other rabbits are waiting. Kehaar attacks Woundwort to buy Bigwig time, and they barely manage to escape on the boat.

The Siege of Watership Down

Days later, the rabbits of Watership Down are alerted of the presence of Woundwort and a small army from Efrafa who are approaching Watership Down. Woundwort demands that they hand over Bigwig and the does, or he will kill every buck in the Watership warren.

Hazel, Watership's chief rabbit has all the rabbit holes filled in. When the siege starts, Woundwort and his army will have to dig into the warren. Bigwig is ordered to guard one of the tunnels as Hazel, Dandelion and Blackberry hatch a plan to lure the Nuthanger Farm guard dog (encountered earlier in the story) to Watership Down to attack the Efrafans.

Woundwort's army eventually manage to dig their way in, and Woundwort moves into a narrow tunnel towards the rabbits. Blackavar attempts to stop him, but is quickly killed by the general. Woundwort then chases after Pipkin through the tunnel to a point where he is ambushed by Bigwig. The two engage in a fierce fight, where both become severely wounded and exhausted. When Woundwort asks Bigwig why he won't surrender, Bigwig responds that his chief rabbit (Hazel) instructed him to guard that particular run. This startles Woundwort, who thinks that a chief rabbit would have to be even stronger then Bigwig. Succumbing to exhaustion, Woundwort leaves the tunnel. Just then, Hazel's ruse succeeds and the dog attacks the Efrafans, killing several of them and chasing off the rest. However, Woundwort, in a berserk rage, fearlessly stands his ground against the dog.

What exactly happens to Woundwort is unknown; he is never seen or heard from again, but no trace of his body is found, leaving his fate a mystery.

Woundwort serves as the primary antagonist of the television series. A brutal and tyrannical leader who sees himself as the one doing everything for the best of his warren, Woundwort strives to destroy Hazel and his 'outsiders' because of the hope for free life they represent for his own subjects. He is the biggest rabbit in the series and has black, ragged fur, notched ears, a red right eye and his left eye is blind. He deeply respects Campion, even after his betrayal by him, and he often punishes and threatens Vervain, but still values him as an adviser and loyal subject despite this. He briefly shows a softer side after Pipkin tells him that his mother was killed by a weasel (a fate that Woundwort himself went through), and for a brief moment before Efrafa's destruction sees himself for what he is and what he has brought Efrafa to. After the destruction of Efrafa, Woundwort becomes obsessed with seeking his destiny of destruction, which leads him to the warren he was born in: Darkhaven. In the end, Woundwort pays the ultimate price for his actions and as punishment, he and his Darkhaven minions are taken away to the Shadowlands by the Black Rabbit of Inlé.

General Woundwort is the cruel, brutal, arrogant, domineering, and tyrannical overlord of Efrafa, ruling with a iron fist, and is very cunning, but also extremely powerful and truly menacing. He is willing to face many dangers himself, fighting animals such as weasels, stoats, and at one point a household cat. He inspires his fellow rabbits to do the same; the General's refrain is that such animals "aren't dangerous". He seems to feel more comfortable fighting threats than running from them. He is capable of keeping his courage and wits about him when danger and the unexpected occur. However, his rage clouds his judgement, and he occasionally lacks common sense, such as when he launched himself at the Nuthanger Farm guard dog (although we never saw the outcome, it is assumed the dog killed him). However, he does have his limits; he wouldn't take on a fox and Kehaar the seagull was a bit more than he could handle. However, he is extremely suspicious to the point of paranoia and inflexibility; even when Efrafa faces a desperate situation because the population continually increases beyond the warren's ability to contain it, he refuses to allow further digging to expand living space or any of its inhabitants to leave, and Efrafa appears on the verge of explosion or collapse.

Woundwort (being the savage brute he is, lives by a concept of "power from strength") believing that leadership be given to the strongest rabbits. This is seen in the scene when Woundwort discovers that Bigwig is not Watership's chief rabbit, and Woundwort is afraid of a rabbit that could be stronger than Bigwig.

He is also very treacherous and manipulative, offering rewards to those who serve him, such as does, and giving his powerful thugs freedom and privileges. This is primarily done, so that they won't feel tempted to betray him.

General Woundwort lives on in the minds of the Watership rabbits of later years as a kind of supernatural bogeyman:

"And yet there endured the legend that somewhere out over the down there lived a great and solitary rabbit, a giant who drove the elil (predators) like mice and sometimes went to silflay (eat) in the sky. If ever great danger arose, he would come back to fight for those who honored his name. And mother rabbits would tell their kittens that if they did not do as they were told, the General would get them - the General who was first cousin to the Black Rabbit (the Grim Reaper of rabbits) himself. Such was Woundwort's monument: and perhaps it would not have displeased him." 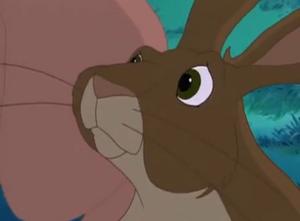 Woundwort as a bunny 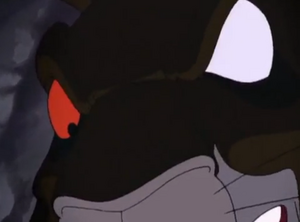 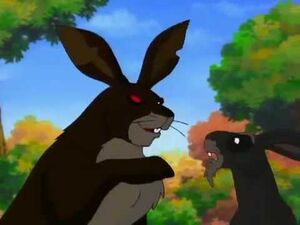 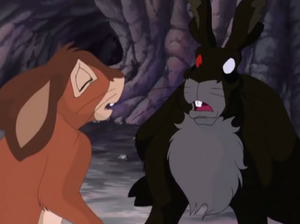 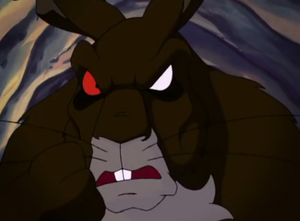 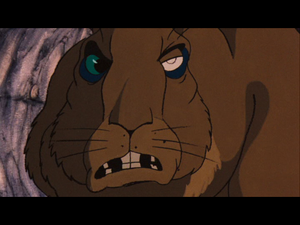 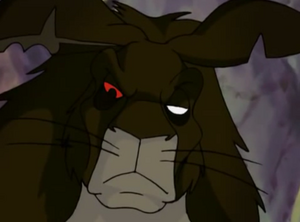 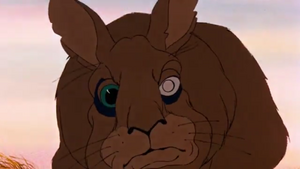 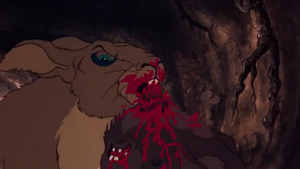 Woundwort chasing after Pipkin in the Watership Down warren 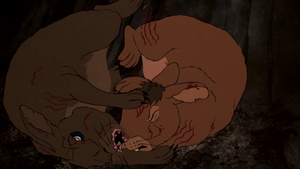 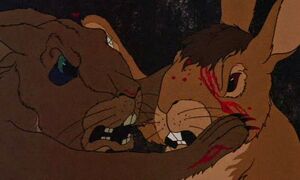 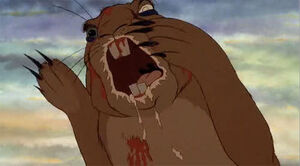 Retrieved from "https://villains.fandom.com/wiki/General_Woundwort?oldid=2447855"
Community content is available under CC-BY-SA unless otherwise noted.