Leader of the Badan Empire

Release all of the past Kamen Rider villains from the underworld.

Attempting to flip the worlds of the living and the dead

The Generalissimo of Badan is the true leader of the Badan Empire, appearing as a giant skull in the sky, and the overarching antagonist of the Kamen Rider ZX TV Special, as well as a major antagonist in both the Kamen Rider and Super Hero Taisen franchises.

The Generalissimo first appears at the end of the Kamen Rider ZX special Birth of the 10th! Kamen Riders All Together!!, and later returns as the main antagonist of the Super Hero Taisen movie Heisei Rider vs. Showa Rider: Kamen Rider Taisen feat. Super Sentai. He is yet another incarnation of the Great Leader.

He was voiced by the late Gorō Naya (as with most incarnations of the Great Leader) in the Kamen Rider ZX special, and by Tomokazu Seki in Kamen Rider Taisen due to Naya's death on March 3, 2013.

The Generalissimo first appeared after Ambassador Darkness's death, revealing itself as the true leader of the Badan Empire and sneering at the ten Riders before disappearing. Dr. Kaidō identified it as the energy of an evil spirit.

In the manga, Kamen Rider Spirits, the leader is identified as Great Leader JUDO, JUDO has a Kamen Rider form called Susanoo, a golden version of ZX with the ability to transform into nine Shōwa Kamen Riders. He has his own language, which he can telepathically compel others to understand.

The Generalissimo of Badan reappears in this film as the main antagonist, leading a Badan Empire comprised of the spirits of all of the previously defeated Kamen Rider villains and monsters. His goal was to use a machine to open a portal on the surface world to the underworld to release his underworld army and allow them to invade Earth. Learning of Badan's plan, Ryo Murasame infiltrated Badan disguised as Ambassador Darkness to get close and destroy the machine but the Generalissimo was aware of his true identity and misled him with a decoy. After capturing Shu Aoi and using him to power their machine to revive the undead, the portal was opened the Generalissimo revealed his true form as a giant skeletal dinosaur as his underworld armies breached the surface and went on a rampage through the city. He is defeated when the Ressha Sentai ToQger in ToQ-Oh fuse with Kyoryu Red in Gabutyra and Kamen Rider Den-O in Den-Liner, combining into ToQ-Oh Kyoryuzin Feat. Den-Liner and destroy the Generalissimo of Badan. 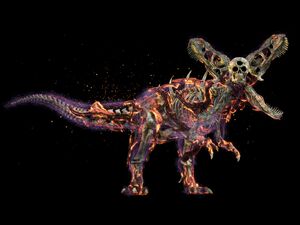 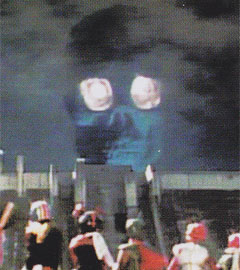 The Generalissimo of Badan reveals himself by the end of Kamen Rider ZX. 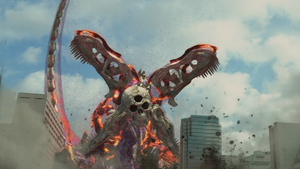 The Generalissimo of Badan reveals its true form.