Leader of the Enlightened Ones

Manipulating people into working with him.

Brainwash Shikamaru, Sai, Rō, and Soku, and kill them if they don't obey his will.

He was voiced by Atsushi Ono in Japanese and by Kaiji Tang in English.

Gengo sees the world as it needs to be recreated. Gengo believes that the shinobi should be the ruling class of society, and that the feudal lords are undeserving of their ruling power. With his ambitions, he planned to bring the world together and end what he calls the "persecution of shinobi" from the daimyos. Gengo was a strategic and charismatic man of ideals who used auditory genjutsu to bring people together with a new, passionate will. He had confidence in his plans and talked to people formally, believing that his ideals are correct and that he can get others to serve under him by giving them a new will. He would later show signs of failure-intolerance and stop becoming affable when Shikamaru somehow resisted his auditory genjutsu.

Gengo, along with other Hidden Mist ninjas, teams up with Zabuza in revolting against the Fourth Mizukage and his atrocious ways of ruling over the village. Unknown to its people, Yagura was being manipulated by Obito Uchiha to plot despair among the Hidden Mist Village for being responsible for Rin Nohara's death. Zabuza and the group, including Gengo, were left with no choice but to flee the village permanently. After the incident, Zabuza and most of his other followers began hiring mercenary ninjas. When Zabuza agrees to work under corrupt people, however, Gengo and many others defected.

After leaving the group, Gengo arrived to the Land of Silence and seized the nation. He developed an auditory genjutsu called "Demonic Illusion: Cajolery of Glamour" to manipulate others into working for him by forcing them to reassess their ideals to match his, allowing him to come closer to his ambition of taking power away from the daimyos and allowing shinobi to rule the world. He easily became the ruler of the Land of Silence, and the leader of the Enlightened Ones, a cult that much of the population was a part of, thanks to his auditory genjutsu.

As Gengo's Enlightened Ones were growing, he starts gaining attention to himself from the world, specifically the Shinobi Union as they began to realize many of their people went missing while investigating the Land of Silence for taking their potential jobs. His recent brainwashed recruits, which includes Sai, prompted the Hidden Leaf Village to demand his capture or death.

During one of Gengo's many speeches meant to keep people in Curtain Village, the capital of the Land of Silence, Gengo baited Shikamaru, Rō, and Soku by falsely introducing the execution of Sai. Gengo held Rō and Soku captive and turned them into Enlightened Ones, and detained Shikamaru, with the real Sai acting as his warden. Gengo was thrilled to have Shikamaru to become his right-hand man, and tried multiple times to brainwash Shikamaru. Temari, Ino, and Choji stormed Gengo's throne room and interrupted Gengo's genjutsu. Shikamaru then finally comprehends Gengo and Temari began using her fan to create a vacuum to eliminate Gengo's chakra infused voice.

Gengo fled his Enlightened Ones as Shikamaru pursues. Gengo tried to use his sword to defeat Shikamaru but Gengo was then detained. Soku then fired a Chakra Needle to take away Gengo's ability to speak by skillfully aiming it as his tongue. He is then taken to the Shinobi Union's headquarters in the Land of Iron. 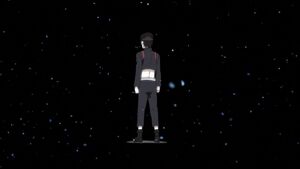 Gengo putting Sai under a genjutsu. 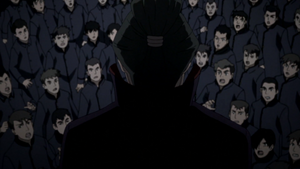 Gengo and his Enlightened Ones. 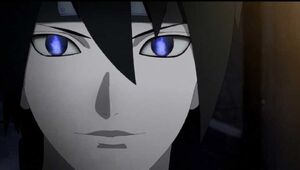