Terror with the Bow

Head of the Ashina clan

Watching Tomoe dance to Takeru's music with Emma (formerly in the past before their deaths).

Save and return Ashina to glory.

Genichiro Ashina is the main reoccurring antagonist and boss of Sekiro: Shadows Die Twice. Genichiro is the leading member of the Ashina Clan and grandson of Isshin Ashina, a legendary swordsman and northern hero who founded the clan. He is anxious about an incoming attack of the Interior Ministers' army and seeks to kidnap the Young Lord to "make use of his immortal bloodline" .

He was voiced by Ray Chase in the English dubbed versiom, and Kenjiro Tsuda in the Japanese version.

After Isshin's coup, Genichiro was adopted into the Ashina family after his mother died and was raised as Isshin's grandson and eventual successor. At some point, Genichiro began training under Lady Tomoe, a descendant of the Okami warrior women of the Fountainhead Palace. He also became acquainted with Emma and Lord Takeru at some point, the doctor that will help Wolf later on and the previous Divine Heir. He and Emma would often go near the Everblossom and watch how Takeru played music and Tomoe danced to it.

Three years prior to the game's events, Genichiro fought against the Interior Ministry and although he managed to drive their army back, Ashina still suffered a fatal blow at Hirate Estate. Genichiro began to seek immortality and encouraged Doujun to research the Rejuvenating Waters of the Fountainhead Palace. It seems at some point he also allied himself with Senpou Temple and the Gunfort.

After the attack on Hirata Estate, Genichiro has taken the current Divine Heir- Lord Kuro into custody. He locks him up into the Moon Tower and orders his men to guard it. Genichiro somehow learns of Emma's treachery and awaits the fleeting Divine Heir and his outhbound at the silverglass field, where he and Wolf engage in a battle. Regardless of whether Genichiro beats Wolf fairly or by cheating, the fight still results in Wolf losing his hand and being left for dead. Afterwards, Genichiro is seen walking away with a nightjar who is holding an unconscious Kuro.

The NPC eavesdrop dialogues suggest that Genichiro is preparing his defenses for a huge attack and is willing to put all manners of creatures on the frontlines. When Wolf finally arrives at the top of the Ashina Castle, Genichiro is seen together with Emma and Kuro, looking towards his grandfather's living quarters and asking Emma of his condition. After being informed of Isshin's dire condition, Genichiro approaches Kuro and asks him to accept him into his immortal oath again. Kuro refuses and states he cannot do so. After Wolf reveals himself and promises to take Kuro back, Genichiro realizes that the only way to get the Dragon's blood from Kuro is to kill Wolf.

After a tough fight, Wolf comes out victorious, but Genichiro is still not dead, as it's revealed afterwards that he too is immortal. He has drunk from the Rejuvenating Waters, thus giving him extreme resilience to mortal wounds. Genichiro runs off in search of more power.

After Wolf obtains the Crimson Mortal Blade, it could be speculated through one of Isshin's secret dialogues that Genichiro has also obtained a Mortal Blade of his own during that time.

During the first invasion, Isshin hints at Genichiro coming back soon to put the Black Mortal Blade to use. If Wolf chooses to side with his father, Owl will fight and kill Genichiro while Wolf fights Emma and Isshin.

After defeating the Divine Dragon and coming back to Ashina Castle, Wolf finds Kuro confronting Genichiro at the silverglass field, where all began. Prior to Wolf coming, Genichiro has wounded Kuro with his Mortal Blade. As Kuro collapses onto the ground, Genichiro and Wolf engage in one last battle. After being quickly overwhelmed by Wolf, Genichiro realizes he is no match for him and summons his grandfather in his prime to carry on his will.

In many ways, Genichiro is a foil to the main character - Wolf. Both are highly trained warriors who had been adopted and raised after the Ashina coup twenty years ago, and thus are unflinchingly loyal to their masters. The two even go as far as to eventually wield their own Mortal Blade by the end of the game. However, Genichiro seeks immortality no matter how cursed it will leave him. Wolf had it entrusted to him, and even then he's shown remorse for its consequences. Genichiro goes against his own grandfather's wishes out of dogged loyalty to his country; Wolf disobeys his father figure's mandates out of morality. In the end, Genichiro was a man who could never move on from his duties and dream of being more than just the successor to the Ashina clan.

Genichiro also believes that, unlike his grandfather Isshin, he doesn't have what it takes to save Ashina from the fires of war. So he turns the black Mortal Blade on himself, sacrifices his life, and resurrects the old man in his prime to fight for Ashina one last time.

Genichiro isn't cruel by nature as one can see from his quotes, but in his quest to find the needed power to protect Ashina, Genichiro is absolutely ruthless and unwavering. He is willing to commit many atrocities such as abandoning his humanity, hurting innocents, kidnapping a child, using animals as weapons, employing abominations and encouraging horrid experiments.

Genichiro seems to desire to live up to the Ashina clan's expectations as their next Lord in line. He also seems to have some form of obsession with the land of Ashina, presumably because in his eyes - the land serves as a replacement to his dead mother, thus he feels a sort of misplaced affection for it, even referring to it as 'her'. 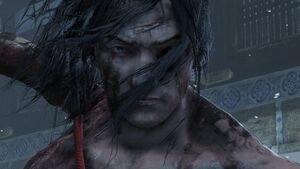 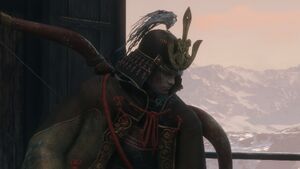 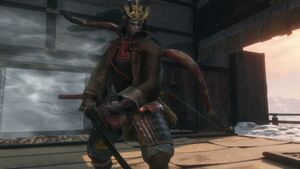 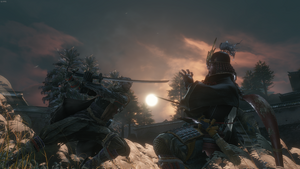 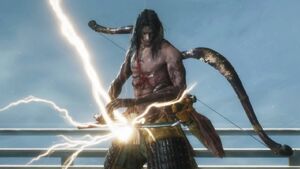 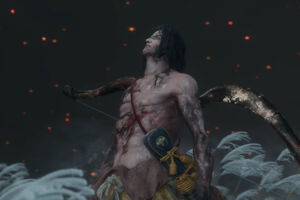 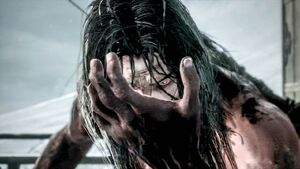 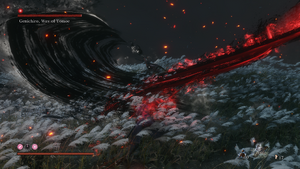 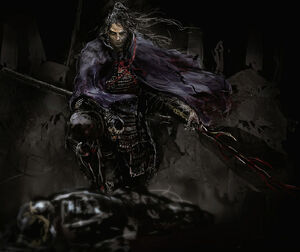 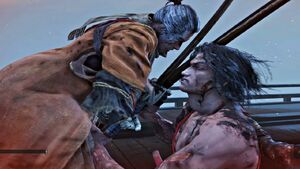 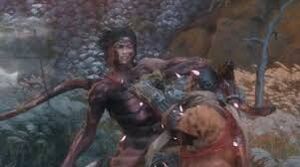 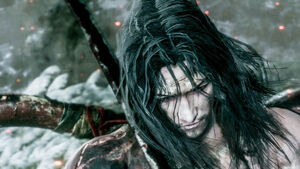 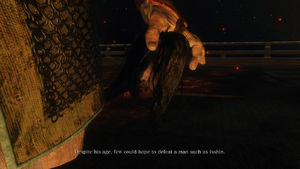 Retrieved from "https://villains.fandom.com/wiki/Genichiro_Ashina?oldid=3702861"
Community content is available under CC-BY-SA unless otherwise noted.