Kill anyone that gets in her way (failed).

Genocide is a minor antagonist from DC Comics.

At some point in the future, Ares steals the dead body of Wonder Woman. He comes back through time and manipulates Dr. Barbara Minerva, the power behind the Secret Society of Super Villains, and Dr. T.O. Morrow to gather a team of scientists to collect soil samples from various regions of Earth where acts of genocide took place over the past one hundred years ranging from 1908–2008. The scientists, with the magical help of Felix Faust, use the soil to further empower the corpse of Wonder Woman with the evil energy of death and destruction. The result is the creation of the sadistic monster Genocide, brought to life through a combination of science and magic. T.O. Morrow believed Genocide was too unstable to be let loose, and pleaded with Minerva to terminate the project. Further validating his point, Genocide even attacked her fellow team member Phobia, nearly killing her. Despite this, Morrow's words of caution were completely ignored.

Dr. Minerva initially set Genocide loose at a shopping mall in downtown Washington D.C. to draw the Justice League's attention. The Department of Metahuman Affairs dispatched a team of agents, which included Agent Diana Prince to investigate the disturbance. After changing into her super powered alter ego, Genocide beat Wonder Woman near to the point of death and stole her Lasso of Truth. After having the lasso surgically grafted into her body by the new Crime Doctor, Genocide was sent to the home base of the Department of Metahuman Affairs to retrieve the captive Doctor Psycho. She slaughtered nearly everyone there before being attacked by the Justice League. Genocide quickly defeated Green Lantern, Firestorm, and Red Tornado. However, once Wonder Woman returned to the battle with reinforcements and was close to being overwhelmed, Genocide tapped into a facet of Wonder Woman's lasso that allowed her to create an explosion of negative psychic energy. The blast destroyed the Department of Metahuman Affairs building and killed the majority of persons left in its wake. The resulting aftereffect overwhelmed the few survivor's emotions and rationality, causing them to react negatively. Before leaving, Genocide kidnapped Wonder Woman's friend Etta Candy. Genocide tortured her, ultimately leaving Etta in a comatose state for Wonder Woman to later find.

Athena reveals to Diana the truth behind Genocide and that the creature will be used by Ares as an instrument to destroy the gods and heroes unless Diana can stop her. Upon learning this, Diana attacked Genocide with renewed vigor, ripping the surgically implanted lasso from Genocide's body and leaving her to drown in the ocean. When Diana went to retrieve the body, she discovers that Genocide had disappeared. Ares arranged for Poseidon's son Euphemus to bring him her body so that he can heal her wounds. He then transferred Genocide's soul into a clay figure of a demon child and placed it in the care of a rogue Amazon warrior named Alkyone who is determined to destroy Diana.

When Alkyone becomes the new Queen of Themyscira, she magically causes the spirit of Genocide to enter herself and three other Amazon allies. Their present status is unknown as Wonder Woman slammed the titan Cottus on top of them, causing the stone monument they stood upon to crumble to the sea. The either unconscious or dead bodies of several of the Genocide-possessed Amazons were dragged to the shore by other non-possessed Amazons. 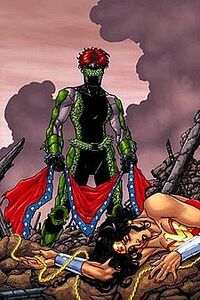 Genocide in front of a defeated Wonder Woman. 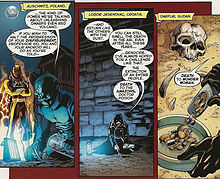 Souls being collected to form Genocide.