The Gentle Criminal
The Chivalrous Thief

Elasticity (can bend and manipulate anything he touches)

Gain fame and attention on media by attacking U.A. (failed).

The Gentle Criminal, or simply known as Gentle, is a major antagonist from the manga/anime series My Hero Academia. He is an infamous criminal seeking to spread his name across media as the villainous criminal he is today. He serves as the main antagonist of the U.A. Cultural Festival Arc alongside with his partner in crime, La Brava.

Gentle was originally a young man named Danjuro Tobita who strived of becoming an iconic Pro Hero that can save many. Even after facing through tragic moments in his life, Tobita still continued to follow his path of seeking fame. Only this time, he chose to follow the path of villainy instead.

He was voiced by Kōichi Yamadera.

Gentle has an appearance of a well defined and dressed gentleman, wearing an outfit that sports a jacket with a coattail and massive collar, a scarf and stripped pants. He is also seen carrying a cane.

In general, Gentle is depicted with white hair that is combed well and facial hair that is kept clean and neat.

Living up to his name, Gentle presents himself as a man with politeness and respect. He is also confident in himself, as he is not afraid of the amount of crimes he commits and how many heroes would come after him.

Despite seeking for fame, Gentle cares very little for things with value such as money. He simply seeks to make his name an iconic symbol in history that everyone will remember.

Although he is a criminal, Gentle still holds some side of heroism to him. He explains that he commits crimes with good intentions and not just for fame. He has even shown disgust in villains that are far worse than him such as Tomura Shigaraki and Stain. He also fears of La Brava becoming a more heinous criminal, if he were to ever be separated by her.

In the past, Gentle was a young teenager named Danjuro Tobita, who dreamed of becoming a Pro Hero. However, he was struggling greatly in high school, as he was continually failing his classes. Despite this, Tobita continued his best to be a hero and attempted to save a window cleaner who had fallen off from a skyscraper. However, instead, he had gotten in the way of another Pro Hero that was trying to save him, ultimately leading to the window cleaner receiving serious injuries. Eventually, Tobita was expelled, as he was unable to improve his grades. As a result, his parents were greatly disappointed in him and refused to support him.

Some time later, Tobita met one of his old classmates, who had recently became a Pro Hero named Takeshita. His friend did not recognize him, however, leaving him greatly shocked. Tobita eventually gave up his dream on becoming a hero, as he realized that he could never accomplish his goal.

As time goes by, Tobita resurfaced as the criminal known as Gentle and was accompanied by his partner, La Brava. The two had finished robbing a store, as La Brava filmed the scene. She eventually uploads the video online, which gains a lot of views. Gentle begins to think of how people can start taking him more seriously.

When the two reach back to their hideout, Gentle explains that he does not commit crimes simply for his attention, but with reason as well. He then reveals that the only reason he attacked the store was because they were hiding the expiration dates on the branded Fluffy Pudding, when they were about to expire. The two then look back at the documentary video made about Stain, in which they believe stole their attention. Gentle then reveals that his next plan is to infiltrate the U.A.'s Cultural Festival, hoping that the commotion will bring him as the center of attention.

The next day, Gentle is seen brainstorming in preparation, while also observing the U.A. High School itself. La Brava asks if he plans to get the students involved in the incident, to which he replies that the incident alone is enough to grab their attention, much to her satisfaction.

Gentle and La Brave then make their move in disguises, until they come across Izuku Midoriya, who was out getting supplies for the Cultural Festival. The two attempt to leave in order to avoid blowing their cover, but were stopped when he asks about Golden Tips Imperial Tea. Gentle was pleased to see that he knew of the coffee shop, but Izuku was then able to figure out who he was. Having no choice, Gentle decided to reveal himself, while La Brave begins film.

The two then engage in a battle. Gentle attempts to shake him off by using his Quirk on him, flinging him back away. Izuku was able to catch up to them, but then gets caught by one of Gentle's attacks again, sending him back away. When La Brave reveals that they're facing off the Izuku Midoriya, Gentle attempts to keep his distance further and rush to the U.A. However, Izuku was able to knock him back into a construction area.

Gentle gets caught in the construction beams, but eventually frees himself as he bounces back up into the air, only for Izuku to charge at him. Gentle then bounces away from him, using the construction beams. He then prepares to escape by slingshotting himself and La Brava with a nearby crane. Izuku attempts to stop them with a charged attack, but the two were able to escape.

Eventually, however, Izuku was able to confront them once more, having them cornered. Gentle was able to free themselves after receiving a power up from La Brava's Quirk. The two then collide into each once more. Gentle begins to overpower Izuku with his strength. Before finishing him off, Gentle asks him why Izuku wishes to become a hero in the first place, to which he replies that he wishes to bring a bright future that everyone can be around for, much to Gentle's satisfaction. While Gentle continues holding him down, La Brava begins to hack into the U.A's network to disarm the security.

Gentle then disregards his plan of creating attention and instead focuses solely on defeating Izuku, after developing respect for the young hero. Izuku sends a couple of wind attacks at him, but Gentle is able to evade them with his Quirk. Izuku manages to land one hit on him, however, causing Gentle to lose his balance. With a clear opening, Izuku finishes him off with a St. Louis Smash, finally knocking down Gentle for good.

Seeing Gentle defeated, La Brave rushes to the scene as she begins hitting Izuku, demanding that he lets him go while yelling how Gentle worked so hard to achieve this one goal of his. Gentle then begins to fear that if he allows La Brava to escape on her own, she will commit worse crimes than he has done. Refusing to accept this fate, Gentle sends Izuku flying back while wishing him to bring a brighter future for La Brava's sake. The two are then confronted by the Pro Heroes Hound Dog and Ectoplasm, placing them under arrest.

As Hound Dog interrogates him, Gentle begins to reflect on his past, on how he's lived for himself and was glad to spend his last time battling Izuku Midoriya. At the same time, he reflects on the crimes he's committed, coming to the conclusion that his worst one is manipulating La Brava. Eventually, Izuku returns to clear up the situation that he was simply a prankster that he got in a dispute with. Hound Dog hesitantly accepts his words, but nonetheless, prepares to take him the police station to clear up the story with Gentle. Before he is taken away, Gentle tells Izuku that he was like him in the past; someone who wanted to be a hero that was born out of despair. He wishes for him to bring a bright future for others that reach to it.

Gentle sat down with one of the officers, who was going over his crimes and checking his background. He tells him that he was scared as he simply wanted to achieve his dream, regardless of the path he was going on. The officer tells him that it was a good thing they stopped him and that he should focus on rebuilding his life. Gentle makes one last request, in which he asks for black tea to drink, much to the officer's annoyance.

Despite his well-defined appearance and polite nature, Gentle is a powerful and strong fighter that can fight incredibly hard. Izuku Midoriya even admitted that out of all his battles, Gentle may be his toughest opponent yet. 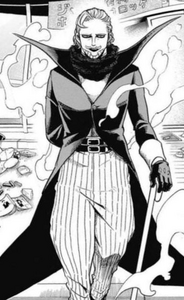 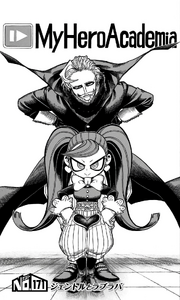 Gentle alongside La Brava on the cover of Chapter 171.
Add a photo to this gallery 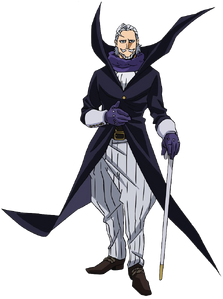 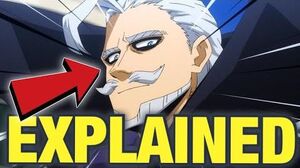 Gentle Criminal EXPLAINED
Add a photo to this gallery

Retrieved from "https://villains.fandom.com/wiki/Gentle?oldid=3578392"
Community content is available under CC-BY-SA unless otherwise noted.