The Gentleman Caller
Will Rudolph
Twin
The Bad Seed

Raping and killing beautiful young women, and keeping their body parts as trophies.

Rape and kill as many beautiful women as possible (failed).

Gain notoriety for his crimes (failed).

The Gentleman Caller (real name: William Rudolph) is the secondary antagonist of the 1995 thriller novel Kiss the Girls by James Patterson, and its 1997 film adaptation. He was the college friend of fellow serial killer Nick Ruskin, also known as "Casanova". Together, they raped and murdered dozens of young and beautiful women.

In the film, he was portrayed by Tony Goldwyn, who also played Michael Drucker in The 6th Day, Carl Bruner in Ghost, and Samuel Braithwhite in Lovecraft Country.

Much like his accomplice, not too much is known about his past, though it is very briefly stated that his father abused him as a child by beating him with his belt. What else is known, is that in 1981, while he was in college, he stalked and killed a young couple in Chapel Hill, North Carolina, on a lake. He kept the woman's tongue as a trophy. Somehow, Nick Ruskin was the only one who found about this, confronted him about it, and convinced him he could trust him. It was from that point on that the two formed a bond and began on their own murder sprees together. He eventually became a doctor, which came in handy for Nick who would use Will's drugs to sedate and weaken his victims.

Unlike Nick Ruskin, who was at least more calculating and somewhat civil in behavior and had rules on whether or not he would kill women, Will had no rules. He would kill any women right on the spot in the most brutal of ways. He would even  threaten "special bonus kills"  if his "diary entries" about his life weren't published in the papers of a Los Angeles reporter, Beth Lieberman. His methods often included cutting off his victims' body parts such as their fingers and their feet to keep them as trophies.

After one of Nick Ruskin's victims, Kate McTiernan, escapes and confronts Alex Cross about finding the killer, Will is the first one suspected as Casanova, seeing as to how Beth, whom he killed, had suspected him. Alex and some of the other cops keep following and spying on him until at one point, he invites a young girl to come over to his cabin. Realizing this would lead to no good, Cross and the other cops break in as they hear her screaming and manage to save her in time, but Will escapes. This leads to a car chase involving Cross and Will, which only ends with Will escaping and Cross getting injured.

They search Will's apartment and find picture of Rudolph with Dr. Wick Sachs. On the back it reads "Casanova". They then suspect Dr. Wick and take him in when they discover he keeps stolen clothing from women. Alex does not believe Wick is Casanova given stealing belongings is not his schtick. When they take him into the interrogation room, Alex physically attacks him, realizing for sure that he isn't Casanova given the killer is physically capable of fighting. This leads him to realizing Will merely put that picture in his room to protect his friend's identity.

Eventually, both Nick and Will reunite and break into Kate's home, and while Nick is beaten down somewhat easily, Will manages to take her by surprise and beat her to a coma for a while. He even expresses a desire to eat her, to which they both laugh about, but they instead leave her alive. Later in the novel, Alex and his partner, Sampson, discover where they are both keeping the women and make it to their hideout. Nick and Will are both watching them and take Sampson out while Cross finds Naomi. Cross hears Sampson scream and runs to find both Nick and Will, wearing masks, on top of his partner with a knife stuck in his back, but still alive. Cross takes his gun out and fires at them, hitting one on the shoulder. The two take off running and make it to a nearby bar, steal a truck and drive off. Cross takes a car and goes after them. In traffic, the two run out of the car, running opposite directions and firing their guns. Cross follows one, they exchange gunfire, and he hits him in the chest. Cross runs to the man and takes off his mask, revealing him to be Rudolph. He dies telling Cross that he will never catch Casanova. 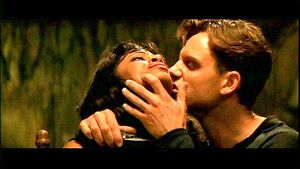