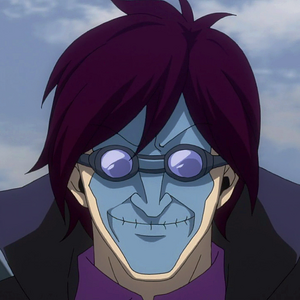 Geoffrey is an antagonist in Fairy Tail.

He was voiced by Takashi Matsuyama in Japanese and Jeffrey Schmidt in English.

In the year X686, the Mages of Geoffrey's guild, Blue Skull attacked Mavis Vermillion, Yuri Dreyar, Precht Gaebolg, Warrod Sequen, and Zera when they arrived in Magnolia Town. When Mavis saw the Mages coming, she created an army of soldiers with her Illusion Magic, which frightened the Blue Skull Mages and gave them pause. She demanded to see their Master and Geoffrey walked out from the crowd of Blue Skull members. Mavis demanded the Tenrou Jade to be returned lest she unleash her power, but Geoffrey was unfazed because he saw through her Magic, dispelling it himself and sending his subordinates in to attack. Yuri Dreyar tried to throw a Crystal Bomb at him, but Geoffrey stopped it with Telekinesis and sent it flying back towards him.

Later, while Geoffrey was in a forest hunting, Warrod Sequen moved the trees around him frightening his horse and his subordinates, but Geoffrey himself remained unconcerned. Warrod then informed him that he and his comrades took over Blue Skull's base at Kardia Cathedral and that their money and treasure was no longer in their possession. Geoffrey then asked Warrod if he was there to seek revenge, to which Warrod replied that they had already gotten their revenge. At that moment, one of Geoffrey's men informed him that Magnolia Town was on fire, much to his dismay. Warrod fled and Geoffrey ordered his men to pursue him, while Geoffrey himself rushed back to Magnolia Town. When Geoffrey made it to the town, he was shocked at the state the town was in. Just then, Mavis emerged from the flames and told him that he burned her home in a much similar fashion and that she was taking her revenge. When the townspeople cried out from the flames, Geoffrey realized that he was just viewing another illusion, and once the illusion dissipated he realizes that he isn't in Magnolia Town, but in a jail that was constructed just for him. After he was trapped, Mavis told Geoffrey that his guild had been defeated and he warned her and the others not to touch the Tenrou Jade, a warning Mavis disregarded until Geoffrey informed her that if the Jade was touched, it would destroy all of Magnolia Town. Geoffrey was then shown to have escaped.

Geoffrey was later seen spying on Mavis during the declaration of Fairy Tail's formation, and declaring the founding of the guild Phantom Lord.