George is a one of the titular major antagonists (along with Lenny and Daffy) in Gremlins 2: The New Batch, in which he is the eldest member of the first batch. George is a mogwai turned gremlin with a tough gangster-type persona. He is best friends with the goofy Lenny and is always by his side. He seems more composed and calm when compared to the other gremlins, a trait he shares with the Brain Gremlin.

As a mogwai George had dark gray fur with white patches on his limbs as well as in a skunk tail like pattern on his torso. HIs face was also bordered with brown and black markings. He had the second darkest colour scheme of the new batch, only being brighter than his younger brother Mohawk. His face had a constant surly and annoyed look on it, with his ears constantly perched backwards, a trait which followed him into becoming a gremlin.

As a gremlin George had olive green skin with black markings and yellow spikes, his nails were also yellow. During his time as a gremlin he developed a taste for cigars and constantly had one in his mouth.

George and Lenny was born together with fellow mogwai Mohawk and Daffy when Gizmo got water on himself from a leaky faucet. After being awoke, he and Mohawk immediatly began cornoring Gizmo, ordering Lenny to tear a vent open, and accidentally getting hit by said vent in the process. Then he, Lenny and Mohawk stuffed Gizmo inside the ventilation shaft and shut him in before leaving. They ended up at a restaurant on the lower floor of Clamp Tower and ate after midnight, then they formed cocoons together with Daffy who joined them later on after being mistaken for Gizmo and taken to the Peltzer home.

George, Lenny and Daffy, now as gremlins, then sabotaged the Microwave Marge cooking show that was being filmed. As the humans inside the room started fleeing, George noticed the microwave and let Lenny throw some pots inside of it before he shut it and started it up (this was a reference to the first film where a gremlin was killed in a microwave). The microwave then exploded, setting off the sprinkler system which got George and the other two gremlins wet, spawning a horde of new gremlins.

Later sporting a tie and a cigar in his mouth, George and Lenny was seen watching the 1953 movie The Beast from 20,000 Fathoms on a viewscreen in the control room and were laughing hysterically at it.

After the Electric Gremlin was released out over the gremlin crowd in the main lobby, George died together with the rest of the horde; his melting body still had the cigar in the mouth as he died.

George with Lenny on top of him. 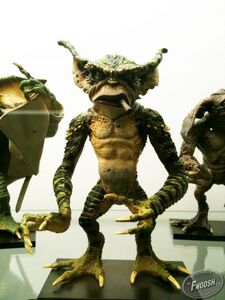 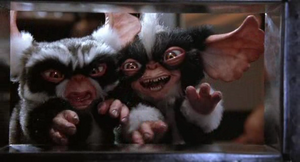 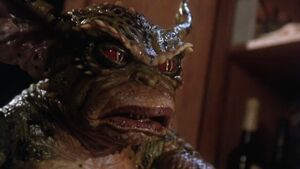 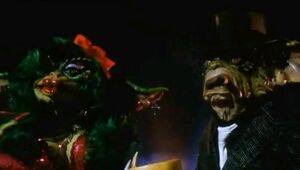 George and Greta in a deleted scene. 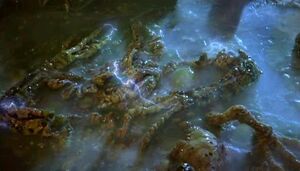 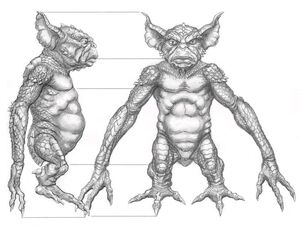