President of the United States of America (formerly)

George Bush is a recurring antagonist/anti-hero in Robot Chicken, parodying the former real life president of the United States.

He is voiced by Seth Green, who has also voiced some of the Aliens, all of the Apocalypse Ponies, Santa Claus, Liberace, the Little Drummer Boy, and Fred Rogers in the same show, Squint in Ice Age: The Great Egg-Scapade, Maximus Kong in TMNT (2012 Series), Boyd in The Trumpet of the Swan, The Swamp Creature in The Lego Batman Movie, and Lumpy in Krampus.

After George Bush gets a call from Bill Clinton on board Air Force One, who tells the president he has "borrowed" it in order to go to a Burning Man festival with Snoop Dogg and several hookers, he orders the plane to be shot down, likely killing everyone on board out of pure spite.

George Bush is given a Mogwai as a gift from China which he names Fruit Loop and doesn't listen to any of the warnings about caring for him, and proceeds to soak him with water and feeds Fruit Loop well after midnight, so the Gremlins emerge to cause chaos all throughout the white house until one of them steals Bush's nuclear launch codes to send the world into an apocalyptic disaster. The only survivors are George Bush himself, Fruit Loop, Laura Bush, and Dick Cheney. Laura tells George that she's hungry and he tells her that they can just eat Fruit Loop, though immediately tells him that he's joking, as the three then kill and eat Dick Cheney.

As George Bush is playing a Pokémon game on his Gameboy, he's informed by an aide that he has to asses threats across the world such as hurricane Katrina and the San Diego fires, which he brushes off as boring. The aide is pushed aside by Condoleeza Rice who gives him his own personalized comic book about the Iranian president Mahmoud Ahmadinejad who has nuclear arms and George quickly transforms into Captain Texas, his superhero persona, and flies off to Iran.

Mahmoud Ahmadinejad prepares to use his nukes to kill all the children of the world and George throws him into a furnace before he can learn the codes to deactivate the missiles, so he flies into space and redirects one of them to all of the Middle East, one of them to China, and the last one directly into the sun to blow up the Earth.

Suddenly, George finishes reading is comic book and throws the aide into a fireplace to kill him and then jumps out of window where he crashes into something off-camera and dies. 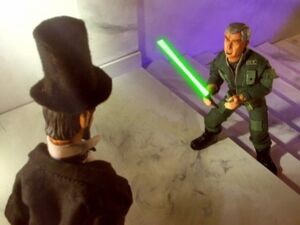 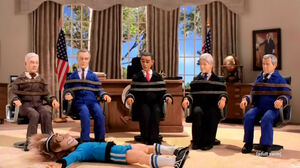 George Bush's cameo in Chipotle Miserables, on the far right.