To kill Darius Stone and stage a coup against President Sanford and the chain of command to become the new President of the United States (failed).

He is the U.S. Secretary of Defense and leader of the Deckert Commando Unit who plots a coup against President Sanford of the United States of America and take over the country. Consequently, Deckert becomes Darius Stone's arch-nemesis.

He was portrayed by Willem Dafoe, who also played Raven Shaddock in Streets of Fire, Eric Masters in To Live and Die in L.A., John Geiger in Speed 2: Cruise Control, Max Schreck in Shadow of the Vampire, the Green Goblin in Sam Raimi's Spider-Man trilogy and Spider-Man: No Way Home, Armando Barillo in Once Upon a Time in Mexico, Nikolai Diavolo in James Bond 007: Everything or Nothing, Lord Cob in Tales from Earthsea, Rat in Fantastic Mr. Fox, J.G. Jopling in The Grand Budapest Hotel, Jack Lassen in The Simpsons, Ryuk in Netflix's Death Note, Thomas Wake in The Lighthouse and Clement Hoately in Nightmare Alley.

Deckert first appeared to be honest and trustworthy as he seemingly holds great loyalty towards President Sanford and their country. However, this was all a facade to hide his true nature as a manipulative and power-hungry warlord who intends to overthrow the President as he thinks of him as weak because of the latter's intent of dismantling various military branches to focus on foreign aid.

Deckert also proved by to be quite vengeful towards Darius Stone for breaking his jaw and defying his orders in murdering civilians, even attempting to shoot him down by saying that he waited this moment ever since that event.

Being a high-ranked general, Deckert once ordered his unit to burn to smoke out civilians. One member of his crew, Darius Stone (the protagonist of the film), spoke out against it and convinced some other members to stop Deckert. During the struggle, Stone broke Deckert's jaw. After the war, Stone was sentenced to 20 years of prison for disobeying orders.

As Deckert continued to serve, he became friends with General Jack Pettibone which whom he led a unit for many years. Some time later, Deckert became the new Secretary of Defense, but he resented the President for his way of tolerance and peacefulness. He believed that under President Sanford the USA became weak and planned a coup, determined to do whatever needed to maintain the supremacy of the United States. He started to round up the members of his old unit, at least the ones who stayed on his side during Stone's riot. As for the soldiers who sided with Stone against Deckert's leadership, they simply counted as "missing", but were secretly kidnapped and imprisoned by Deckert.

Days later, Deckert tries to recruit his old friend General Jack Pettibone for his cause. When Pettibone declines, Deckert has him murdered and with help of Charlie Mayweather and Liebo, he frames Stone for the murder. During Pettibone's funeral, he has Pettibone's unit, who is loyal to Deckert, flown to Washington. Stone later learns that Gibbons is still alive and is now held prisoner along with several of Stone's former comrades, as Deckert plans to frame them all for the coup.

At the night of the State of the Union address, Deckert and his men strike at the White House. Though they manage to take down the President's bodyguards and chief of staff, Stone was able to thwart their plan by arranging a tank strike at the Capitol (with the help from NSA agent Kyle Steele and a gang led by his old friend Zeke). This allowed Stone and Steele to break into the White House and free Gibbons and their comrades before proceeding to kill Charlie and the rest of Deckert's men.

Still not wanting to back down, Deckert and Cobb board the president's escape train taking Sanford as a hostage. However, Stone is able to board the train and kill Cobb. Having no more leads, Deckert takes Sanford hostage and demands Stone to surrender. Stone refuses and deactivates the train's lights while setting off a smoke bomb, taunting Deckert of his jaw. Sanford uses this distraction to wrestle Deckert to the ground which makes Stone to come to his aid. Boarding on a helicopter, Gibbons and Steele are able to get Sanford out of the train. Despite having failed to kill Sanford, Deckert is able to get his gun and aims it at Stone, saying that he's been waiting for this moment for 10 years. Stone responds him to keep waiting as he jumps out of the train into a lake, evading the shots. With Stone out from the train, Gibbons shoots a missile from his helicopter that blows up the train, killing Deckert.

To deny that someone as high-ranking as Deckert planned to assassinate the president, Deckert was buried with all military honors at the Arlington National Cementary as a hero who tried to save the president, much to Stone's disgust. 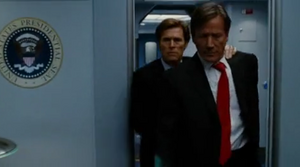 Deckert with President Sanford as a hostage. 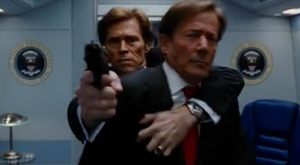 Deckert about to execute Stone. 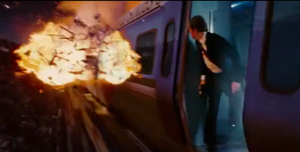 Deckert, moments before his death.