Straight razor and various other blades

Satisfy his lust for killing young girls (succeeded with the previous girls, but failed with Clair).

George Harvey is the main antagonist of the 2002 novel The Lovely Bones by Alice Sebold, and its 2009 film adaptation of the same name directed by Peter Jackson. He is a murderous pedophile who rapes and murders young girls, including the protagonist, Susie Salmon.

He was portrayed by Stanley Tucci, who also played Lord Roderick in Jack the Giant Slayer, Vernon in Beethoven, and Joshua Joyce in Transformers: Age of Extinction. For his performance as Harvey, Tucci was nominated for the Academy Award for Best Supporting Actor. Nevertheless, he later said that he found the experience of playing Harvey unpleasant.

The novel and the film are relatively the same in portraying his character with the exception being that the film omits his sympathetic backstory. Harvey's mother had bipolar disorder and committed petty theft during her manic phases. When Harvey was eight years old, he witnessed his mother being gang-raped by a group of men whom she had robbed. Shortly afterward, his cold and abusive father banished her from the family.

As an adult, Harvey murders a number of girls and women. He takes a souvenir from each victim. He lives alone in Norristown, Pennsylvania, making a living building dollhouses and claiming to be a widower. Between murders, he satisfies his bloodlust by torturing and killing animals, and his pedophilia by spying on young girls in various states of undress.

On December 6, 1973, he lures his 14-year-old neighbor Susie Salmon into an underground "clubhouse" he had built in the woods near his house, and rapes and murders her once she is in his power. He then dismembers her body, puts her remains in a safe and dumps them in a landfill. He keeps a piece of her bracelet as a souvenir.

He believes he got away with the "perfect crime", and begins looking for more victims, at one point even toying with the idea of killing Susie's older sister Lindsay. Susie, while looking down from Heaven on her family and her murderer, has to choose between her family and vengeance.

Harvey is forced to move after Lindsey, who suspects him of killing Susie, breaks into his house to find proof of his guilt. She eventually finds an incriminating drawing of his "clubhouse", but he catches her. He runs after her, but she is too quick and gets away with the evidence. Panicked, Harvey quickly packs up and flees the state.

After leaving Pennsylvania, he lives a nomadic existence for several years, and eventually settles in New Hampshire. On a wintry night, he approaches a young woman named Clair outside a diner and offers to give her a ride, intending to make her his next victim. She rebuffs his advances, however, telling him to "piss off". Moments later, a large icicle then falls on his shoulder and as he tries to shake it off, he ends up falling down a ravine and he breaks both his back and neck, killing him instantly and brutally.

Besides Susie, Harvey murdered several other girls and women: 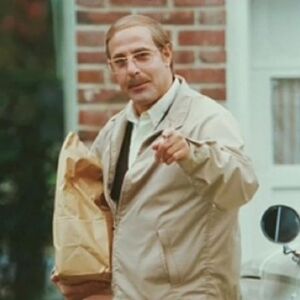 George Harvey in his everyday life. 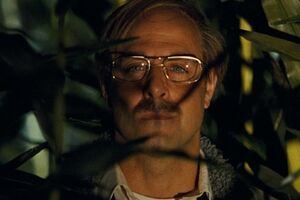 George Harvey, spying on a couple making out.

Mr. Harvey's death.
Add a photo to this gallery

Retrieved from "https://villains.fandom.com/wiki/George_Harvey?oldid=4223944"
Community content is available under CC-BY-SA unless otherwise noted.