George Liquor (often taking his epithet as George Liquor "American"), most famous for his appearances on The Ren and Stimpy Show, and is a occasional antagonist. He is a cartoon character created by John Kricfalusi and is a mascot for Kricfalusi's defunct animation studio, Spümcø. Kricfalusi portrayed George Liquor as a patriotic, outspoken, politically conservative blowhard. Kricfalusi described Liquor as his favorite character to animate.

According to Kricfalusi's blog, a new webtoon starring George is currently in development. It will be sponsored by Pontiac Vibe.

He is prone to extreme anger and violence, with psychotic episodes that rival that of Ren himself (though ironically George would meet his match with Ren, who infamously beat George in a brutal manner for no good reason : this scene was so controversial it is still censored and only really accessible via internet video-sharing sites). 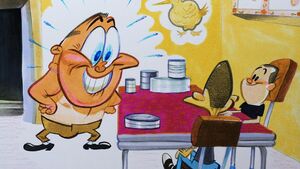 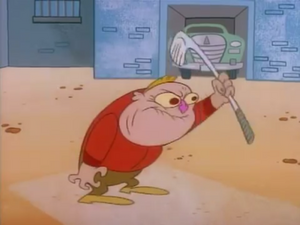 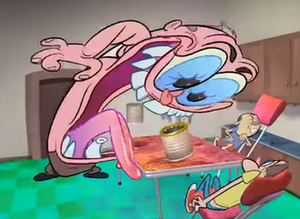 George Liquor Getting Beat Up By Ren

George Getting Mercilessly Beat Up By Ren Hoek

George About To Get Revenge On Ren For Beating Him Up

George Liquor Winning at the Dog Show
Add a photo to this gallery
Retrieved from "https://villains.fandom.com/wiki/George_Liquor?oldid=4026562"
Community content is available under CC-BY-SA unless otherwise noted.