Take his bigoted hatred on the Freeman Family. (failed)

Mr. George Pissedofferson is an elderly Afro-American man and a bad guy who is a member of Colonel Stinkmeaner's group called the Hateocracy.

Pissedofferson first met with the three senior citizens at a retirement home. The three people were Colonal H. Stinkmeaner, Lord Rufus Crabmiser and Lady Esmeralda Gripenasty. At first, they hated each other right away, but immediately, they hated everyone else even more then ever. They brought mayhem and trouble upon everyone including their fellow elderly folk before being finally kicked out. That's when they went separate ways.

Upon Stinkmeaner's death, the three remaining members of the Hateocracy reassembled and vowed to seek revenge against the Freeman family.

Pissedofferson and the other two members of the Hateocracy decide to team up once again to hunt down the Freemans. They first show up at a gas station, run by Uncle Ruckus. They ask if he knows Granddad, which he admits. A fight ensues due to Ruckus's racial remarks, and he is assaulted.

Pissedofferson and Gripenasty show up at Huey and Riley's school and request the boys' presence. The two are called down to the main office to see "their aunt and uncle". Huey, aware that something is wrong, has Riley follow him outside where they meet the two members. They are astonished by their physical abilities, and they are then outmatched by the two elders after an epic fight. Huey proves to be a good match for Pissedofferson but eventually loses to him. Then the school bell rings, excusing the children from their classes, effectively saving the two brothers.

Later the Freemans find out on Wikipedia that Pissedofferson is a member of the Hateocracy and they learn about their lore.

Desperate not to share Bushido Brown's fate, Granddad opens up and apologizes for killing Stinkmeaner. He reveals he didn't mean to kill him, he just didn't want to be shown up by a blind old man. The Hateocracy reveals they didn't even "give a shit about Stinkmeaner", but they wanted a particular family to reign terror on - Stinkmeaner's death only served as a convenient excuse to a convenient target. The police conveniently show up and arrest the Pissedofferson and the rest of the Hateocracy. 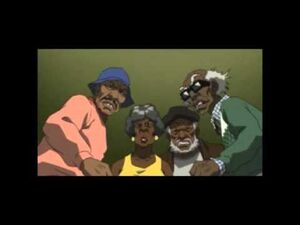 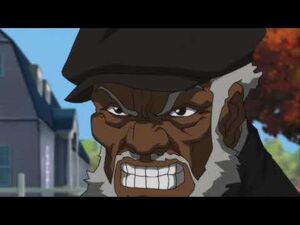 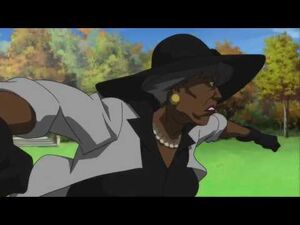