Lead the Confederacy to victory

George Walker Bush is a semi-recurring antagonist from the FOX animated series, Family Guy. A parody of the fourty-third president of the United States of America of the same name, he is villainous for being a racist and corrupt politician who used his presidency to declare a second Confederate war on America in 2004.

He was voiced by Kirker Butler.

In "Brian Wallows, Peter Swallows", George W. Bush was one of the possibilities as to how the world could end.

In "The Fat Guy Strangler", Bush hid out in his treehouse and avoided taking any responsibility as president to help the country undo the damage done by Hurricane Katrina.

In "Boys Do Cry", Chris and Meg Griffin snuck into George W. Bush's house, where they discovered lots of dark secrets about him. Pictures on the wall showed that he was good friends with Saddam Hussein, Osama Bin Laden, and Super Satan. Chris spotted some cocaine on Bush's desk. Meg found a bunch of Planned Parenthood receipts belonging to Laura Bush, revealing that despite his pro-life stance on abortion, George W. Bush has allowed his wife to have several abortions.

George W. Bush woke up in the middle of the night, hearing the noise of Chris and Meg and came into the kitchen, telling them to back off, as he'll give Javier his money eventually, which suggests that Bush is in debt with some kind of mafia. When Bush found out that Chris and Meg were benign, he let them have some beer, even though they were underage.

In "PTV", George W. Bush went down to Vietnam to fight the war but was a bit late to the punch, as he arrived in 1981. The commander told him that the Vietnam war had long since been over and so instead of doing any work, Bush and this military commander just did some cocaine.

In "Back to the Pilot", Brian Griffin traveled back in time the year 1999 and told his past self about 9/11 so that he could prevent it beforehand. When he traveled back to the present, he was being hailed as a national hero on the news for preventing what could have been a major disaster. However, Brian's prevention of 9/11 only created an even worse historical event to follow.

Unable to exploit people's fears with post-9/11 paranoia, George W. Bush lost the 2004 election. He was so upset about losing, that he reformed the Confederate States and declared war on Washington. By 2011, George W. Bush has become a neo-Confederate leader and led nine southern states in seceding from America and declared war on the rest of the country. His official announcement seemed to make no sense at all, being something about a clown suitcase but it was, in fact, his declaration of a civil war.

Stewie Griffin took Brian years into the future to show him what the world is like now that George W. Bush started this war and took him to an apocalyptic future, where everybody's homes were burning down in flames because of an ongoing nuclear war and there were cyborg police officers going around, killing people for being out past a newly established curfew. 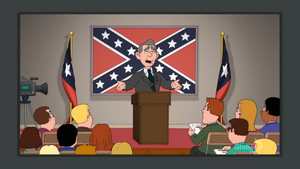 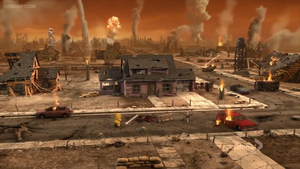 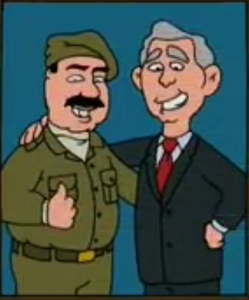 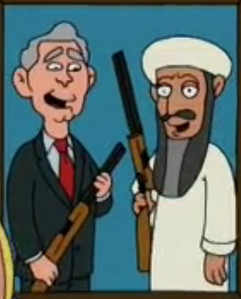 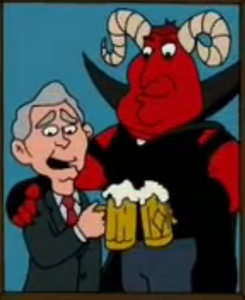