Selling weapons on the black market.

Kill Black Widow and continue selling his weapons on the black market (failed).

Georgi Luchkov (Russian: Георгий Лучков) is a minor antagonist in the 2012 Marvel film The Avengers. He is a corrupt Russian general and weapons dealer until he was brought down by Black Widow.

He was portrayed by Jerry Skolimowski.

General Luchkov was known for selling weapons to the highest bidder for profit. Sent on a mission to spy on Luchkov's activities and take him down, Black Widow allows herself to be caught by Luchkov's two thugs, who knock her out and tie her up to a chair in an abandoned warehouse. There, Luchkov had his thugs to beat up Black Widow in an attempt to obtain valuable information from her.

Despite this, Black Widow maintained her ground against Luchkov, who inadvertently gives out information that one of his generals Solohob was a pawn in his arms sale. Being aware of Black Widow's past as a former assassin for the KGB (led by Madame B), Luchkov decided to torture Black Widow with tools (an act that gave her a scare and two quickened breaths). But before he could do so, he receives a call on his phone from S.H.I.E.L.D. agent Phil Coulson, who demands that he speak to Black Widow. Luchkov reluctantly gives his phone to Black Widow, who explains that she's extracting information about Luchkov's activities, much to the confusion of Luchkov and his thugs.

Upon learning that her partner Barton has been taken captive and brainwashed by the supervillain Loki Laufeyson (as part of the latter's plan to unleash a Chitauri invasion on Earth), Black Widow frees herself by kicking Luchkov in the groin before taking down his thugs with ease. After finishing off the thugs and freeing herself from the chair, Black Widow grabs a chain and wraps it around his leg, leaving him to dangle helplessly, much to his dismay.

It is unknown what happened to Luchkov afterwards, though it can be implied that he and his thugs are arrested and taken into S.H.I.E.L.D. custody. 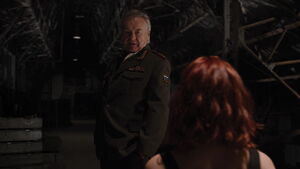 Luchkov and his thugs preparing to torture Black Widow. 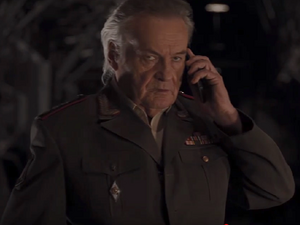 Luchkov getting knocked down by Black Widow, who fights against his thugs.

Luchkov left dangled on a chain by Black Widow before his arrest.