Gain money from his strip club.

George "Georgie" Porgie is a Fable and one of two secondary antagonists in season one of the The Wolf Among Us. He is a murderous and arrogant pimp and the owner of the Pudding and Pie strip club, as well as the unwilling minion of the Crooked Man.

When Bigby arrives at the Pudding N' Pie, Vivian will take him to Georgie. She warns that he is in a bad mood and doesn't like to be disturbed when working. When they enter, he can be seen berating Nerissa as he tries to coach her on her lackluster pole dancing. He resists Bigby's interrogation about Lily's last client and possible killer, and eventually the conversation ends with his boombox being knocked over and broken. After telling his handyman Hans to fix it, Hans mistakenly makes Bigby aware of a client book Georgie keeps of all his girls' appointments. Georgie will deny that it exists and threatens Hans with a wooden paddle for his slip up. Bigby will snatch it from him and can threaten to break Georgie's property to get information out of him. When Bigby threatens to smash a keg, he discovers a floor safe which Georgie claims he has no key for. After again threatening to destroy his property, Georgie will begrudgingly open the safe and Bigby will discover the client book. He comes across Lily's last meeting with a "Mr. Smith." Georgie states the name is probably fake and he can't offer anymore help. He then leaves Bigby to angrily make a phone call about how he has been treated. He is last seen giving Nerissa a key to Room 204 of the Open Arms Hotel after Bigby makes an appointment with her.

Georgie is at the Pudding N' Pie, on the phone with an unknown caller, when Bigby and Snow White arrive to find Crane. As they go into the back room to arrest him, Georgie tells the caller, "we have a problem".

The Crooked Man reveals to Bigby that Georgie was the one who killed Faith and Lily. The Crooked Man also claims that Georgie misinterpreted his orders. Georgie becomes enraged, saying the Crooked Man ordered him to kill them. The Crooked Man immediately denies it and proceeds to hand over Georgie over to Bigby. Angered that the Crooked Man was willing to sell him out, Georgie asks Tweedledee and the Jersey Devil for help, but they refuse to do so. Georgie then refuses to turn himself over to Bigby much to the Crooked Man's annoyance. Bloody Mary arrives and a fight breaks out between Bigby and the Crooked Man's associates. Georgie grabs a knife and tries to stab Bigby with it but accidentally stabs Tweedledee instead. Bigby disarms the knife from Georgie and stabs him in the stomach. Vivian takes the wounded Georgie to their car. Bigby gives chase and follows them to the Pudding N' Pie. Bigby asks Georgie on why he killed Faith and Lily. Georgie reveals that Faith and the other girls tried to "pull a runner" up on them and the Crooked Man wasn't too happy about it so he ordered Georgie to kill them. Georgie also reveals that he had to or else Vivian will be killed in their place. Georgie then tells Bigby that Vivian is the "Girl with the Ribbon" and that the other ribbons were created from hers. Georgie forces Bigby to remove Vivian's ribbon. Saddened and through with pretending that she didn't care about anyone, Vivian commits suicide by taking off her ribbon. Shocked and traumatized by Vivian's death, Georgie apologizes to her. Georgie's wound becomes fatal and he is unable to move. He then tells Bigby of the Crooked Man's whereabouts. Bigby can either choose to mercy kill Georgie or leave him to bleed out as revenge for Faith and Lily. Regardless of the options chosen, Georgie will die.

Georgie runs the Pudding N' Pie, a strip club that also caters to the unmentionable desires of Fabletown's citizens. He has tried just about everything there is to try in pursuit of worldly pleasures, but none of it satisfies him for long. He does seem to enjoy pushing people's buttons. He takes pride in his nightclub, and doesn't react well to anyone meddling in his affairs.

After fighting with Bigby, Georgie has his stomach slashed by Bigby, causing near disembowelement. Immediately after the fight, Vivian takes him back to the Pudding 'N Pie so he can heal but it is too late to save Georgie. Bigby finds out where he is, and realizing that he will die very soon, Georgie begs Bigby to kill him so he does not suffer when he dies.

The player is given two options: 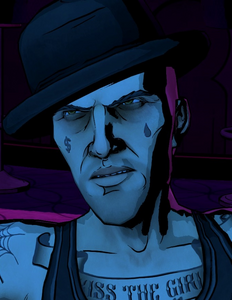 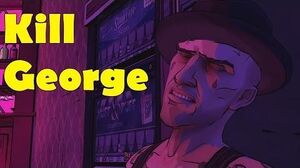 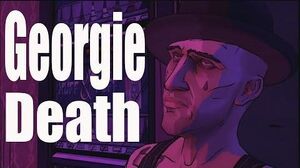