Villains Wiki
Register
Don't have an account?
Sign In
Advertisement
in: Doctors and Scientists, Tragic, Anti-Villain,
and 26 more

Cure himself and his son from fear (failed).

Gerald Crane is a recurring antagonist in season 1 on the FOX television series Gotham, appearing in the episodes "The Fearsome Dr. Crane" and "The Scarecrow".

He commits murders based on the paranoia of the victim in order to cure himself of fear, which he sees as the reason for all crimes. He is also the father of Jonathan Crane, who later becomes the DC Comics villain Scarecrow.

He was portrayed by Julian Sands, who also played the eponymous character in Warlock and Warlock: The Armageddon, Vladimir Bierko in 24, DeFalco in Call of Duty: Black Ops II, Jor-El in Smallville and Valmont on Jackie Chan Adventures.

At the beginning of the episode, Gerald hangs a man with a fear of heights from a high building, but not before having him take a long look down. While the man realizes his situation, Gerald measures his heart rate. After his victim dies, he winches him back and removes his adrenal gland for study. Gerald later kidnaps a man who is afraid of pigs by driving him into the arms of a henchman with a taser. He later binds the man to a chair, releases three grown pigs around him and has the henchman tasked to murder him wearing a pig-mask.

When Detectives James Gordon and Harvey Bullock find out that every victim was a member of the same fear support group, Bullock visits the group. Under the alias "Todd", Gerald is present and listens to Bullock and the therapist Scottie Mullins while they talk about fear, hearing that Mullins' greatest fear is drowning in a pool. He approaches Bullock and asks if he's new to the group, stating that he himself is a regular. Later, during a group meeting, he states that he is afraid of failure and thinks that he's passing this onto his son. Visibly shaken, he leaves the room crying. When Mullins follows him, he abducts her and loads her into his truck. Bullock, who follows, can only see the car driving away.

Gordon finds out that "Todd" attended sessions for the last two months and that he used a name although the group protocol states that the members stay anonymous. From Bullock's conversation with Mullins, Gordon deduces that Crane will drown her in a swimming pool.

At the pool, Gerald psychologically tortures Mullins by making her realize that she will shortly drown. His son, Jonathan, arrives and seems to be shocked by what he sees, although he is aware of his father's plans. Gerald tells his son that this is for the greater good and for humanity, then sends him outside. He then throws Mullins into the pool. When Bullock and Gordon arrive, Gerald escapes through the maintenance area.

After escaping the GCPD, Gerald attacks another victim in his house and steals his adrenal gland, from which he extracts body fluids which he then mixes with some substances before injecting it into himself. He then hallucinates his deceased wife taunting him about not helping her and breaks down, visibly afraid.

When they visit a co-worker at Gerald's workplace, Gordon and Bullock find out that Gerald's wife died seven years ago in a car accident (though they later find out that his wife died in a house fire). Gerald also wrote an academic paper about fear, stating that fear was an evolutionary flaw in humans and that rape, murder, and all other crimes are committed out of fear. From this, the detectives deduce that Gerald is harvesting the hormones that cause fears from the adrenal glands of his victims to try to cure himself and a so-called "Subject B" from fear.

Later, while Gerald is testing his substance again, his son arrives and he states that his cure is working and that it is soon Jonathan's time to be cured. Later, he injects Jonathan with his cure. Although Jonathan seems to be skeptical, he lets his father continue. However, he runs away, stating that he cannot endure more of the cure, but Gerald tells his son that stopping the procedure now would be harmful for him.

Gerald tries to talk reason into his son by telling him that life without fear is best for mankind and brings him back to the house. There, he continues trying to "cure" Jonathan until Gordon and Bullock arrive. While Jonathan tells Gerald that they have to leave, Gerald is determined to continue the protocol, bringing his son outside.

Under a scarecrow at a field outside of the house, Gerald prepares to inject his son with another dose, although Jonathan states that the injection is too heavily dosed. Nonetheless, Gerald injects it, but his son screams in agony, looking at the scarecrow above while slowly going mad. Jonathan's screams alert the detectives, who approach Crane. Not afraid of their weapons, Gerald walks towards them without cover and starts shooting at them. Gordon and Bullock return the fire, killing him.

After Gerald's death, his son is hospitalized, and though the doctors managed to save his life, they could not stop the effects of the serum, and presume that they will continue to torment him for the rest of his life. Alas, Gerald's plan to "cure" the world of fear ultimately backfired, and now his son must suffer the consequences, forever haunted by a nightmarish scarecrow.

Professor Hugo Strange eventually gets hold of the fear formula and uses it in his experiments, prominently on Oswald Cobblepot.

An unstable Jonathan would later become a supervillain known as "Scarecrow" (and dressed as one to fit the moniker) and uses a new version of the fear toxin which sends his victims into panic and insanity after being exposed to their fears. 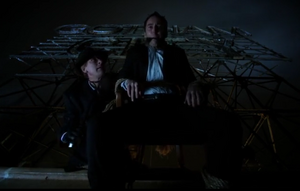 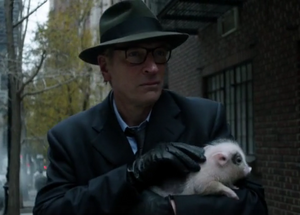 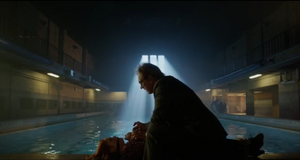 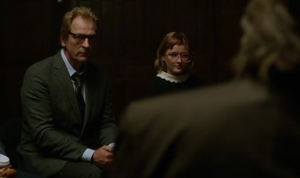 Crane as "Todd" at the meeting 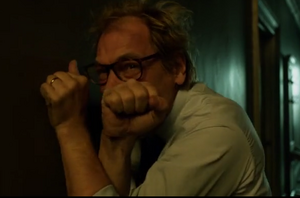 Crane afraid of his vision 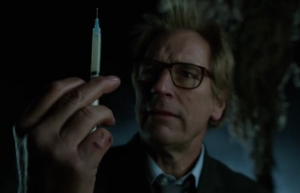 Crane about to "cure" his son 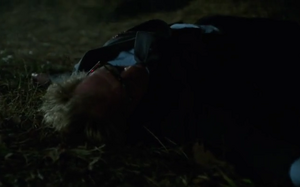 Crane shot dead by the police