Avoid getting arrested by the LCPD (failed).

He was voiced by P.J. Sosko.

Gerry was born in 1973 as the third son of Maureen McReary and Mr. McReary, as well the younger brother of Derrick and Francis, Gerry's younger siblings, Packie and Kate, were born in the next few years.

Gerry was always involved in family conflicts, with his older brothers. He was also beaten by his father. 27 years later in 2000, Gerry's father committed suicide. Gerry then became the leader, as Derrick left for Ireland, and Francis became a police officer.

Gerry made an alliance with the Pegorino crime family Capo Ray Boccino, who used them to weaken the Ancelotti crime family.

According to his brother Patrick he had been married three times prior to 2008.

When Niko very first meets Gerry, he is heavily inebriated, making him very capricious. He belittles his brothers and Michael Keane, a friend of the family. Immediately after, he warns Niko to never hurt his family, or he will hurt Niko's.

Later after that mission he calls Niko saying he has work. Niko comes over to visit a now sober (and less hostile) Gerry. His first mission, Actions Speak Louder than Words involve Niko placing a Car Bomb on Anthony Spoleto's car then blowing it up when he reaches a meeting between him and the Albanians. He then has Niko dress up with the clothes of an Albanian he got on ice then, wearing that outfit, assassinate Frankie Garone in the mission I Need Your Clothes, Your Boots, and Your Motorcycle; the goal of these two missions are to damage the Ancelotti-Albanian relationship.

Sometime before the events of Derrick or Francis McReary's funeral after Blood Brothers, Gerry is arrested for Racketeering offences and imprisoned in the Alderney State Correctional Facility. After the events of Undertaker, he has Niko come to the facility to tell him to set up and kidnap Gracie Ancelotti in the mission "I'll Take Her..." in order retrieve the Diamonds, which were stolen by Luis Lopez, in the TBOGT mission Not so Fast, after breaking up the museum deal (he then needs to snap a picture of her with his Whiz phone in the Ransom mission.) Afterwards, in the mission She's a Keeper, he has Niko move Gracie from one safe house to another because the Ancelotti's found her.

Then, he gives Niko his final mission; Diamonds are a Girl's Best Friend. This mission has Niko Bellic and Packie McReary trade Gracie for the Diamonds held by Luis Lopez and Anthony Prince. At the exchange, Gracie is successfully returned; unfortunately, Ray Bulgarin and his men interrupt the deal. Luis, Tony and Gracie escape the scene and the guy who chased him. Unfortunately, one of his men stole the Diamonds; when Niko and Packie cornered him after taking out the others, he threw the Diamonds in a truck; Packie and Niko eliminated him and the remainders, thus closing Gerald McReary's role in the story. Gerald remained in prison, bidding a final farewell to Niko stating he will be in prison for a long time. He tells Niko to watch over his family. 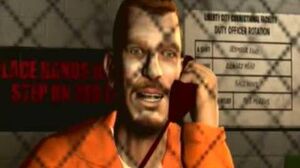