Kill her husband, John, after she discovered he had cheated on her

Gerda Cristow is the main antagonist of Agatha Christie's 1946 Hercule Poirot novel, The Hollow. She is the wife of the story's victim, Dr. John Cristow.

Although she was originally suspected to be the murderer of the case, she was quickly "proved" to be innocent due to holding the wrong murder weapon... until the story's plot twist had occured, where Gerda actually was the murderer and was shielded by Henrietta Savernake.

She was portrayed by Claire Price in Agatha Christie's Poirot.

Gerda Cristow was the plain-looking wife of Dr. John Christow, who once idolized her husband and blamed herself for the problems he had caused. However, she later had discovered that her husband was cheating with her friend, Henrietta Savernake. Driven by hatred and jealousy, Gerda plotted to kill her husband. When they were arriving to the Hollow, Dr. Cristow's daughter used the tarot to check her father's fortune, and she showed him Death card. Nevertheless, he had not taken it seriously.

Upon arriving in the Hollow, John unexpectely met with an old flame, who was an actress named Veronica Cray, and they went out together... before starting a quarrel about their original relationship. The next day, around 3.a.m., when Poirot arrived at the Hollow, he had witnessed the death of John, with Gerda holding a revolver at him. With his own dying words, John uttered Henrietta's name before he died. Henrietta apparently fumbled and slammed the revolver into the swimming pool, destroying any evidence upon it.

Soon, it was discovered that the gun that killed John was not the same revolver that Gerda held, and no one actually witnessed her killing him. It was also shown that the entire family was actually shielding Gerda.

In reality, Gerda was the murderess. She had prepared two pistols, one of them that would be served as the "wrong murder weapon" she held after shooting John with the other one. Even John, who was the victim, was actually pleadging Henritta to shield the safety of Gerda. After John's death, Henrietta retrieves the real murder weapon and hid it inside a horse sculpture she made. She got it handled by a blind match-seller, and placed it in Poirot's hedge.

At this point, it was seemed that all the evidence were destroyed, but there was one remained: the real murder weapon's holster. Greda cut it up and placed it inside her workbag. Then, realized she would be cornered, Gerda poisoned the tea she prepared for Henrietta in an attempt to murder her. However, Poirot discovered the real murder weapon, as well as Gerda and Henrietta's respective roles in this case, and swapped the cups. Then, Gerda drank the poisoned tea accidentally, killing herself. 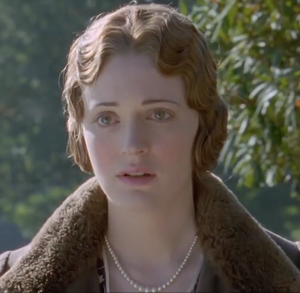 Retrieved from "https://villains.fandom.com/wiki/Gerda_Christow?oldid=3926248"
Community content is available under CC-BY-SA unless otherwise noted.