Governing the Nazi Moon Base.

Oberstgruppenfuhrer Gerhardt Dunkel is the main antagonist of the Wolfenstein: The New Colossus's second DLC, The Diaries of Agent Silent Death. He is the SS-Oberstgruppenfuhrer responsible for the torture and death of Jack Valiant, and later became the head of Moon Base Gamma. Jack's wife, Jessica, better known as "Agent Silent Death", manages to get revenge by killing Dunkel and his cohorts, Lorentz and Stiglitz.

He was voiced by Thure Riefenstein, who also Anton Krieger in Wolfenstein: The New Order, and Wolfgang Schwarz in The New Colossus's third and final DLC, The Amazing Deeds of Captain Wilkins.

Gerhardt Dunkel was born before World War II, and joined the Nazi Party at an unknown time, rising to the rank of General. He became known for his efficient work effort and infamous record, becoming dreaded by others. During World War II, Dunkel was responsible for the capture of Jack Valiant and had him tortured and killed.

After the war, Dunkel was appointed head of the Nazi Moon Base, but remained in contact with his former subordinates in California. He became close with Chuck Lorentz, who was originally an OSA agent who betrayed Jack to the Nazis, and became a actor and producer. The two were seen on Lorentz's talk show, enjoying themselves while Chuck presented an action figure that was of William J. Blazkowicz.

To avenge her husband, Jessica Valiant, began seeking to kill Dunkel and all those responsible for his capture and death. Dunkel was warned of Jessica by Stiglitz, telling him that he had a nightmare of her killing him. After Jessica Valiant killed both Hans Stiglitz in his Gestapo office in Sacramento, and Chuck Lorentz at Paragon studios, she sneaked on a transport to the moon base. As Jessica assaulted the moon base, Dunkel taunted her over loud speakers, asking if he was supposed to be her crowning achievement and telling her she was in over her head.

When Jessica got to Dunkel's office, she was unable to get through thanks to the nearly impenetrable door, and sees him being protected by Supersoldaten and a guard dog. However, by destroying the air supply, Jessica forced Dunkel to come out for evacuation, allowing her to kill him and finally avenge her husband. Afterward, she escaped and decided to continue fighting against the Nazis, and was last seen assassinating a commander. 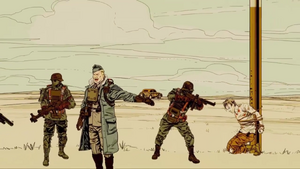 Dunkel with Chuck Lorentz on his tv show. 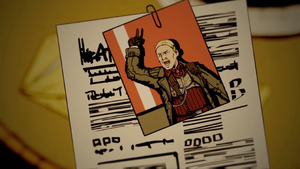 Dunkel's file that was given to Jessica by the Crimson Bulldog.

Dunkel's corpse.
Add a photo to this gallery

Retrieved from "https://villains.fandom.com/wiki/Gerhardt_Dunkel?oldid=4150961"
Community content is available under CC-BY-SA unless otherwise noted.